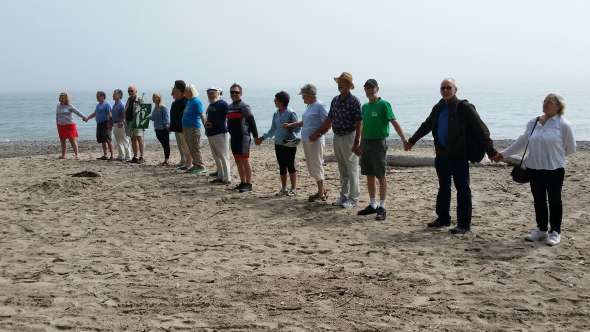 Great Lakes advocates gather for an “All Hands On Deck” rally Monday at Doctors Park in Fox Point. Photo by Chuck Quirmbach/WPR.

The new fiscal year started on July 1, but Wisconsin still does not have a new state budget. That’s the result of a three-way Republican disagreement between the state Assembly, Senate and Gov. Scott Walker. They’re arguing over funding levels for things like roads and education spending.

“If you’re not willing to raise the revenues, it’s not conservative to borrow and spend, which is unfortunately what it seems like our Senate colleagues are talking about,” Vos said.

He said it’s up to the Senate to come up with something that can pass both chambers.

At this point, the impasse doesn’t mean a lot for the average Wisconsinite. State agencies can continue to operate under the last budget’s spending levels, so most state services will go unchanged.

But if lawmakers and the governor can’t come to an agreement over the coming months, road projects and school districts could be the first to see issues.

The University of Wisconsin-Green Bay campus is home to its first nestlings of peregrine falcons.

The birds were once thought to be on the brink of extinction but have made homes in urban settings.

Mother Mimi and “stepfather” Rupert are nurturing four male falcon chicks near the top of the 11-story Cofrin Library on the UWGB campus, said Thomas Erdman, curator of the university’s Richter Museum of Natural History.

The chicks born at UWGB were fathered by an un-banded male peregrine. Rupert drove him away but Erdman said the stepfather is a good provider for the hatchlings.

The peregrine was almost extinct in the 1960s because of pesticides and habitat loss, but that Wisconsin helped rescue the species, Erdman said.

Now Erdman said the falcons are thriving mostly in urban areas. He estimates there are 34 “active nests” of breeding pairs in the state.

Big businesses and local governments faced off June 27 in the state Capitol over a proposal that would change how property taxes are assessed for big box stores in Wisconsin.

Local governments that rely on property taxes are supporting a bipartisan bill that would end that practice, but business groups are fighting it.

“It’s going to create a more hostile environment for commercial property owners, but other owners as well — manufacturing and others,” said Jason Culotta, senior director of government relations at Wisconsin Manufacturers and Commerce.

“If you’re a residential property tax payer, you don’t get to say, ‘Well, I think I should be assessed on that foreclosed property in a different community,'” said Rep. Chris Taylor, D-Madison, during testimony.

The bill has yet to receive a vote in committee. The Door County Board of Supervisors passed a resolution in March urging this tax loophole be closed.

Great Lakes advocates across the Midwest held events in more than 60 cities Monday, as a budget battle nears in Congress. It was part of a publicity effort called “All Hands On Deck.”

“It may not be sexy, but it’s really, really important, particularly for the Great Lakes, where you have a lot of municipalities that are discharging directly into the lakes,” Davis said, adding that many lakeside communities are on the verge of needing to update their sewage treatment systems.

Trump’s budget proposal calls for money for the Great Lakes to instead be spent on national defense.

According to the U.S. Department of Agriculture, Wisconsin produced 6.13 million barrels of cranberries in 2016. That’s a 26-percent increase from the previous year. But growers are struggling to make a profit off of the fruit.

“Right now, the commodity price for cranberries is well below the cost of production,” said Tom Lochner, executive director of the Wisconsin State Cranberry Growers Association. “We have a lot of growers here in Wisconsin and across North America that are experiencing some financial difficulties with those lower grower returns.”

Lochner said cranberry juice sales have been flat to declining over the last few years, while growers in the U.S. and Canada have worked to increase yields. So stocks of cranberries have increased more quickly than the industry can grow demand for the fruit.

“It isn’t economically sustainable and as a result growers feel the pressure to transition out of the business,” Lochner said.

But some growers are cutting costs or borrowing with the hope that international exports could turn things around.