Jobs in energy efficiency, renewable energy and other clean energy sectors continue to grow in Wisconsin, according to a new report released by Clean Energy Trust, an Illinois-based nonprofit and funder of early-stage clean technology firms, and Environmental Entrepreneurs, a national, nonpartisan business group.

The report shows most of Wisconsin’s clean energy jobs are in the energy efficiency sector, an area focused on the goal of reducing the amount of energy required to provide products and services, like using LED light bulbs instead of incandescent bulbs, or purchasing EnergyStar appliances. But the greatest percentage growth was in renewables, especially solar energy. However, as a percentage of the statewide workforce, clean energy jobs in Wisconsin remained below one percent, the lowest in the Midwest.

Local governments would not be allowed to regulate air and water quality or restrict blasting at some sand mines, quarries and gravel pits under a provision in the state transportation budget.

The state Legislature’s budget-writing committee inserted language into the spending plan that would restrict how local governments regulate sand mines, quarries and gravel pits that supply material for public works projects after April 2018.

In essence, the policy would bar counties, cities, towns and villages from restricting things like truck traffic, blasting and setbacks. It would also block local governments from setting their own air and water quality standards beyond those enforced by the Wisconsin Department of Natural Resources.

Local governments have opposed efforts by Republican lawmakers, the frac sand industry and Wisconsin Manufacturers and Commerce to restrict local control of mines and quarries over the past several years. But the provision included in the state transportation budget, with its scope limited to public projects, was hailed by Wisconsin Towns Association Executive Director Mike Koles as a workable compromise.

“The Wisconsin Towns Association is pleased that legislators responded to the voices of hundreds of town officials and rejected efforts to make wholesale changes to local regulatory authority, including complete elimination of non-metallic zoning and licensing authority,” Koles said. “The budget motion strikes a balance that preserves a vast majority of local government regulatory authority, only applies to aggregate quarries — not frac sand — ensures historic increases in general transportation aids and continues ongoing efforts to increase road building efficiencies.”

After President Donald Trump announced his administration is ending the Deferred Action for Childhood Arrivals program (DACA), Green Bay’s Police Chief issued a statement on Facebook stating all immigrants in his city will continue to be treated the same. Police Chief Andrew Smith wrote police are, “committed to working together to keep our city and residents safe, regardless of people’s legal residency status. Officers are in our neighborhoods to protect and serve everyone, and officers will always act impartially, again regardless of one’s status.”

“The courts have ruled that immigration enforcement is the role of the federal government,” Smith continued in the post.

Lawmakers held a public hearing Sept. 7 in Ladysmith about a bill that would eliminate Wisconsin’s moratorium on sulfide mines. Fewer than 100 people attended the hearing.

Under current law, mining companies are required to provide proof of a sulfide mine that’s operated for 10 years and been closed for 10 years without doing environmental harm before a sulfide mine may be permitted in the state. However, companies would no longer have to meet that requirement under a bill recently put forth by Sen. Tom Tiffany, R-Hazelhurst, and Rep. Rob Hutton, R-Brookfield.

Supporters of the bill at the public hearing said the change would pave the way for mining projects and serve as a shot in the arm for Wisconsin’s economy.

Opponents of the bill, including Dave Blouin, state mining committee chair with the John Muir Chapter of the Sierra Club, said they share lawmakers’ desire for a thriving economy and workforce.

“But, it can’t be at the expense of the public’s legal rights,” he said. “Those rights require that the Legislature consider carefully any threats to public health via air and water, and guard against any threats to our treasured lakes, streams, wetlands and other natural resources.”

Much of the testimony centered on the state’s Flambeau copper-gold mine, which was the only sulfide mine successfully permitted, operated and reclaimed in Wisconsin.

Environmentalists brought a lawsuit against Flambeau Mining Co. several years ago for polluting a small stream near the mine site. A federal judge ruled the company violated the Clean Water Act, but also noted discharges into the stream were small. Supporters of the bill highlighted that the Wisconsin Department of Natural Resources has said the company remained in “substantial compliance” with state standards.

Wisconsin ranked 30th in the nation in private sector job growth in the latest detailed numbers from the federal Bureau of Labor Statistics.

The numbers come from the Quarterly Census of Employment and Wages, which economists regard as the “gold standard” of job metrics.

The bill passed on a 20-13 vote with Sen. Robert Wirch, D-Kenosha, joining Republicans to support the plan and Sen. Robert Cowles, R-Green Bay, joining Democrats to vote against it.

GOP supporters of the deal with the Taiwanese electronics manufacturer lauded it as “transformational,” while Democrats pushed unsuccessfully to tighten the bill’s job creation requirements and environmental protections.

The bill now moves back to the Assembly, which will take up Senate amendments. If lawmakers there agree with changes, the package then goes to Gov. Scott Walker for his signature. 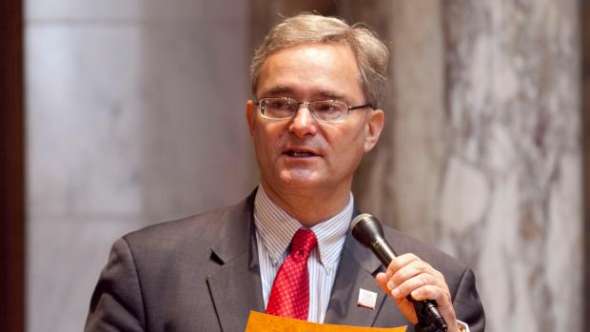 Assembly Democratic Minority Leader Peter Barca has announced he’s stepping down from his leadership position at the end of this month.

The move will put someone else in charge of Assembly Democrats for the first time in nearly seven years.

Barca announced his resignation in a statement Sept 7 after a private meeting with his fellow Assembly Democrats.

“This afternoon I made the very difficult decision to step down as leader of the Assembly Democrats following deliberate, thoughtful discussions,” Barca said. “I am grateful to my colleagues for their support over the last seven years.”

Barca’s statement did not say who would be the next Assembly Minority Leader.

At least one Barca ally, Rep. Christine Sinicki, D-Milwaukee, was not happy with the change.

“We have a group of fairly young legislators who pretty much led this coup who feel that our current leader is not moving the caucus forward,” said Sinicki in a phone interview minutes before Barca’s announcement.

Sinicki said Barca’s decision to vote for the Republican Foxconn incentives bill was a factor in his departure. The Foxconn plant could be near Barca’s Kenosha district.