Next DNR Secretary Will Seek Balance

Gov. Scott Walker said “a lot of people are interested” in being the next secretary of the Wisconsin Department of Natural Resources and that he’s looking for a candidate who can balance environmental protection and economic development.

The governor’s comments came a few days after Cathy Stepp resigned as DNR secretary to take a post with the U.S. Environmental Protection Agency. Her former deputy, Kurt Thiede, is now interim secretary.

Walker said that after the state budget process is over, Thiede will be considered for the permanent job, as will a lot of other people from both inside and outside government.

“But, what I ultimately want in that position is someone who understands the balance between protecting the environment, the natural resources of our state, and continues to protect and support economic prosperity in the state. To me, I don’t think the two are mutually exclusive,” Walker said.

Two months before people start signing up again for health insurance under the Affordable Care Act, the Trump administration has dealt a big blow to a program that the president has described as “failing.” Outreach funding has been slashed, along with money for so-called “navigators,” including ones in Wisconsin. Navigators help consumers sign up for health insurance under the Affordable Care Act, and some said they’re stunned to find out federal funding will be cut next year. Donna Friedsam, who heads Wisconsin’s largest federally designated navigator agency, called Covering Wisconsin, said this week’s announcement was a surprise.

“We had been given reassurances by the (U.S.) Centers for Medicare and Medicaid Services over the last two months that they were going to be supporting the navigator program and we were not given any reason to think that we weren’t going to be funded going forward,” she said.

The federal government announced the decision just a day before the funding was to end on Sept. 1, and weeks before outreach advertising would begin.

The Trump administration has cut ACA funding before. During the final weeks of last year’s signup period, ads for HealthCare.gov were pulled. Industry experts blamed the move for the lower enrollment.

The number of reported syphilis cases in Wisconsin increased dramatically in 2016, according to a state Department of Health Services report. In Wisconsin, syphilis infections went from 270 in 2015 to 427 in 2016.

The increase is reflected nationally. The U.S. Centers for Disease Control and Prevention reported in 2015 that there was a 19 percent increase in primary and secondary syphilis, early stages of the infection characterized with sores and rashes.

Despite the statewide increase, it’s hard for health professionals to pinpoint one cause. 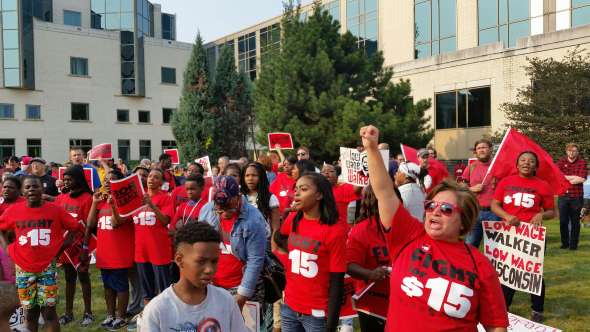 Some hospital workers have joined the national push to have a $15 per hour minimum wage, and make it easier for all workers join a union. The Fight for $15 movement has usually centered on fast food employees, and home health care workers. But on Labor Day, at least 200 people marched through downtown Milwaukee promoting the movement for a variety of low-wage workers.

Wisconsin is seeing a growing income gap between its top-earners and the average worker, according to a report released by the Wisconsin Budget Project and the Center on Wisconsin Strategy (COWS) in Madison. The richest 1 percent in Wisconsin made – on average – 19 times as much as everyone else in 2014, said Laura Dresser, associate director for COWS. Most people in Wisconsin made less than $50,000 a year on average, while the top 1 percent brought in around $933,000 each year.

Dresser said the state hasn’t seen such striking levels of inequity since the Great Depression.

“We’re on this upward escalator of inequality,” she said. “The U.S. is more unequal than we are, but we’re going right up behind it and back up to the levels that were set in 1929.”

Milwaukee County’s controversial firebrand sheriff David Clarke says he’s retiring to “pursue other opportunities.” Clarke submitted a brief resignation letter. “This communication is submitted as the notice of my resignation as Sheriff of Milwaukee County commencing August 31, 2017, at 11:59 p.m.” Clarke wrote. While he was elected to multiple terms as a Democrat, Clarke gained national attention in recent years as an outspoken conservative, cable news regular and early supporter of President Donald Trump. Earlier this year, Clarke announced plans to join the Trump administration as an assistant secretary at the U.S. Department of Homeland Security, but his appointment was never announced by the administration. On Tuesday Clarke announced he is joining America First Action, a political action committee that supports President Donald Trump.

Milwaukee County Executive Chris Abele says Clarke’s resignation is an opportunity “to make some big steps forward” in the department. Sen. Lena Taylor, D-Milwaukee, released a statement praising Clarke’s decision. “I want to thank Sheriff Clarke for his decision to step down. After years of abuse at his hands, the people of Milwaukee can sleep soundly tonight,” Taylor said.

Wisconsin didn’t get any skinnier in the last year. But it also didn’t gain any weight. Wisconsin’s adult obesity rate sits at about 31 percent, near where it has been for the last few years, according to an annual report by the Trust for America’s Health and the Robert Wood Johnson Foundation.

Only one state, Kansas, saw a noticeable decrease in obesity. Wisconsin ranks 23rd nationally, according to the report.

“The great hope we have is to see more progress around physical activity. And what you can find in the report is information on the number of states where we are not seeing that. In fact people are increasingly becoming inactive,” Schwarz said.