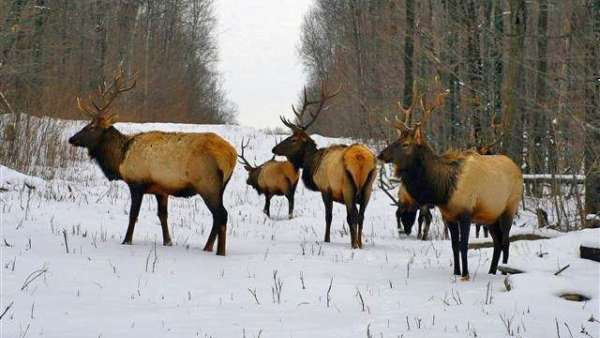 Twenty-three years after the reintroduction of elk to northern Wisconsin, the DNR announces the herd is now large enough for a hunt. Photo by Laine Stowell/Wisconsin DNR.

After a 20-year reintroduction effort in northern Wisconsin, the state Department of Natural Resources will hold the state’s first ever elk hunt near Clam Lake this fall.

Elk were first reintroduced in the Chequamegon-Nicolet National Forest in 1995 when 25 animals were brought in from Michigan. DNR big game ecologist Kevin Wallenfang said the plan was to grow the herd and initiate an elk hunt once the Clam Lake herd reached 200 animals.

“We currently have about 190 elk in the area but when you start adding all the calves to that that should be born this summer, we anticipate we’re going to be over that 200 level by a comfortable margin,” said Wallenfang. “So, we’re going to finally initiate a hunt.”

The elk hunt season is scheduled to run from Oct. 13 through Nov. 11. Permits will cost $10 and hunters can begin applying May 1. Wallenfang said this inaugural hunt will be extremely limited.

“There’ll be a grand total of only 10 permits available out there but state hunters are going to have an opportunity to apply for those,” Wallenfang said. “The odds might seem tough to draw that tag but somebody is going to draw them and it’s going to be exciting.”

The move by the EU is in response to President Donald Trump’s plan to impose steep tariffs on steel and aluminum. Cranberries were one of the U.S. products the EU listed that could face import taxes. Harley-Davidson Inc. motorcycles were also on the list.

Tom Lochner, of the Wisconsin Cranberry Grower’s Association, says this could have a big impact on state growers.

“The U.S. annually exports about 95 million pounds of cranberries to the EU and the tariff would significantly hinder our ability to compete in those markets,” Lochner said.

Lochner said growers are calling on Wisconsin’s congressional delegation to convince the Trump administration to change its mind or at least narrow the proposed tariffs on steel and ultra-thin aluminum, adding that they are hopeful they’ll be able to convince the president to change course.

Ryan’s House Seat May Be Competitive

A top political website has changed its rating for this fall’s election in U.S. House Speaker Paul Ryan’s Wisconsin district from “safely Republican” to “likely Republican.” Democrats are pleased.

The website, called Sabato’s Crystal Ball, comes from the University of Virginia. Managing editor Kyle Kondik said Wisconsin’s 1st Congressional District, which stretches from Janesville to Racine, usually leans Republican. “But it’s also not so Republican that a Democrat couldn’t compete there under the right circumstances,” he said.

Cathy Myers, one of Ryan’s Democratic challengers, said she’s hearing from district residents that “Ryan doesn’t get them anymore. He doesn’t listen to them anymore. And there is a general discontent not only with his work, but also with his support of President Trump,” Meyers said.

Ryan spokesman Jeremy Adler said the incumbent will be “comfortably re-elected because he always puts the best interests of the First District first.”

Groups that want to reduce the number of people behind bars are fighting a plan that would build a new prison in Wisconsin. Assembly Republicans passed a plan last month that would increase state borrowing by $350 million to build a new prison. The plan did not specify when and where the prison would be built.

The borrowing was attached to a bill that would recommend revoking parole or probation for someone who commits a crime while on state supervision.

The ACLU of Wisconsin, the Milwaukee branch of the NAACP and other groups visited the capitol Tuesday to urge state senators to reject the plan, arguing the state should be trying to close prisons, not open them.

Backers of the plan argue a new prison is inevitable because of crowding at Wisconsin’s existing prisons.

State senators are tentatively scheduled to hold their final session day of the year on March 20.

The Miller Park Board of Directors accepted a consultant’s report that says the tenth-of-a-cent sales tax that has been paying for the Milwaukee ballpark could end within two years. The analysis says enough money will have been raised by late 2019, or early 2020, to cover the previous costs for the stadium, as well as expected future expenses.

“Just like when you’re getting down to the last year of making your auto payments, you’re feeling good about things,” Stansil said. “We’re getting very, very close to the end.”

When the state Legislature passed the stadium sales tax legislation 23 years ago, some lawmakers projected the tax could end by 2015.