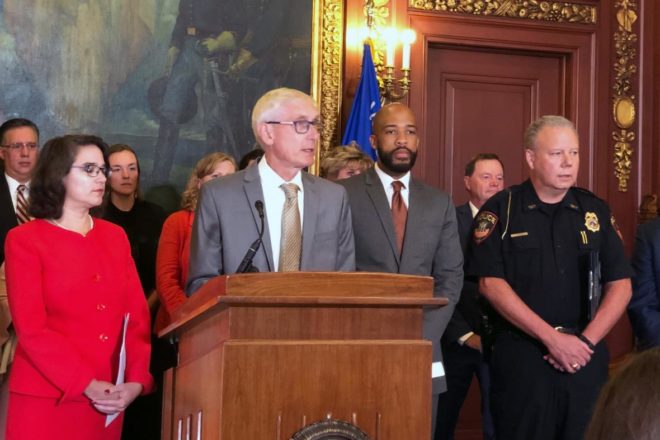 Gov. Tony Evers and Democratic lawmakers rolled out a proposal to expand background checks on gun sales in Wisconsin. Under the bill, which is sometimes called a universal background-check measure, gun sales would have to be made through a federally licensed firearms dealer and involve a background check.

Flanked by the Democratic lieutenant governor, attorney general and more than a dozen lawmakers at a Capitol press conference, Evers proclaimed the plan both “reasonable” and “moderate.”

“This is an issue that should transcend political parties,” Evers said. “It’s time to stop waiting for permission from the NRA. Enough is enough, folks.”

The plan for expanded background checks faces an uphill battle in the Republican-controlled state Legislature, however, where the GOP holds a 63-36 majority in the Assembly and a 19-14 majority in the Senate.

Untreated tooth decay among children and adults in low-income families has been a painful, expensive problem across the U.S. and in Wisconsin, which ranks poorly for kids’ oral health.

A bill designed to create more access to dental care received a public hearing at the state Capitol Wednesday. The proposal by Rep. Mary Felzkowski (R-Irma) would create a state license for dental therapists, who would work under the supervision of a dentist to do restorative work such as filling cavities and putting on temporary crowns.

“This is not going away,” Felzkowski said. “This is a movement that’s nationwide.”

Twelve states allow dental therapists in some capacity. Six have passed laws during the past 12 months authorizing dental therapists to practice in a role similar to physician assistants in medicine, according to the Pew Charitable Trusts.

The federal government says 64 of Wisconsin’s 72 counties have a shortage of dentists, and Felzkowski says the bill is one of several ways to address that.

Wausau School Board Asks for Ban on Native American Mascots

In a unanimous vote last week, the Wausau School Board passed a resolution calling for state lawmakers to mandate the removal of Native American mascots, symbols, images, logos and nicknames at Wisconsin high schools on the basis that their use impairs the educational experiences of all community members.

The Wisconsin Association of School Boards will review the proposal in September. If approved by the Policy and Resolutions Committee and then at the annual Delegate Assembly meeting in January, the association can lobby legislators about the issue.

In 2010, a state law allowed a school-district resident to file a complaint about a school mascot, name or logo with the state superintendent of public instruction, who then had the power to force the school to make a change. Former Gov. Scott Walker’s administration updated the law in 2013 to require that 10 percent of a school district’s population must sign a complaint for it to be legitimate.

The American Psychological Association called for immediate retirement of Native American mascots, logos and nicknames in 2005. A study it conducted found that their use causes harm to the social-identity development and self-esteem of Native American students.

University of Wisconsin-Green Bay Chancellor Gary Miller is leaving the campus at the end of September to head the University of Akron. He became UW-Green Bay’s sixth chancellor in 2014.

“It has been a great joy and a deep honor for me to have been chancellor of the University of Wisconsin-Green Bay,” Miller wrote in a press release. “This is an exceptional university, with great students, faculty, staff and a very bright future. The team at UW-Green Bay is the best I’ve worked with in my career. They are creative and fully committed to this university. The leadership team has a clear vision for the institution and knows how to get there. I wish everyone the very, very best. Green Bay and Wisconsin will always be close to my heart.”

In an interview with WPR, UW-Green Bay Provost Michael Alexander said Miller was forward-thinking and strived to align the campus with businesses and other community members. He said one example of Miller’s accomplishments was his push for the creation of the Resch School of Engineering.

The UW Board of Regents will now choose a new UW-Green Bay chancellor, though no timeline for the search has been announced. It will be the third chancellor search undertaken on a UW campus this year.