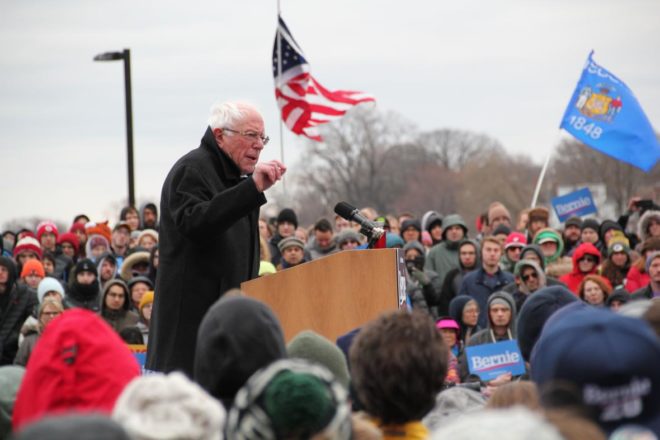 Vermont Sen. Bernie Sanders speaks to supporters April 12 at James Madison Park in Madison, Wisconsin. It was Sanders’ first stop in the state during his 2020 presidential campaign. He won Wisconsin’s Democratic primary in 2016. Photo by Shawn Johnson/WPR.

Role of Women on Farms Is Growing

Greg Bussler, Wisconsin state statistician for the USDA, said part of the increase comes from changes to the survey after the 2012 census.

“Some of the feedback that [the National Agricultural Statistics Service] received last time was to reconsider the demographics section to better capture those that are involved with a farming operation,” Bussler said.

The National Agricultural Statistics Service is the USDA branch that processes all agriculture statistics.

The 2017 census allowed more producers to be counted per farm and more than one producer to be listed as a principal operator. It also included more questions about demographics and the role of producers in making decisions on day-to-day operations, land use and estate planning for farms.

Fifty-six percent of Wisconsin’s 64,793 farms counted in the latest survey had a female producer. Women were listed as a principal producer on 35 percent of farms and as the primary producer, or the person who made the most decisions, on 20 percent of the state’s farms.

Democratic presidential candidate Bernie Sanders (I-Vt.) told a shivering crowd of a couple thousand people along the shores of Madison’s Lake Mendota that he needed their help to complete a political revolution.

“I want to emphasize what this campaign is about is not just winning the Democratic nomination,” Sanders said on April 12. “It is not just defeating Donald Trump, the most dangerous president in modern American history. But it is about all of us – not me, us – transforming this country.”

The rally at James Madison Park was the first visit to Wisconsin this year for Sanders, a U.S. senator from Vermont.

Sanders called Trump a “pathological liar,” saying the biggest lie Trump told in 2016 was that he would stand up for working people.

Sanders is one of at least a dozen candidates seeking the Democratic presidential nomination in 2020.

The Wisconsin Natural Resources Board unanimously approved public hearings on a proposed rule that would create a process for setting site-specific phosphorus standards on the state’s bodies of water.

Wisconsin already has statewide water-quality standards for phosphorus, but these vary depending on the water system. Phosphorus in the water can support the growth of algae and other plants, but too much can overwhelm the system.

The proposed rule would pinpoint situations where site-specific standards may be appropriate, according to Marcia Willhite, water evaluation section chief with the state’s Department of Natural Resources.

“We recognize that there might be specific characteristics about a particular reservoir, lake or river that might require different criteria,” said Willhite. “That’s what the ‘site-specific’ means. It’s for a particular water body.”

After warning Democrats earlier this year to back off making changes to Wisconsin’s abortion laws, Republicans are now proposing their own.

Sen. Patrick Testin (R-Stevens Point) and Rep. Barbara Dittrich (R-Oconomowoc) are seeking support from colleagues for a bill that would prevent abortions from being performed solely because of race, color, national origin, ancestry, sex or fetal anomaly such as Down syndrome.

“This legislation is an essential step to solidify in statute that all unborn lives are to be treated equally,” Testin said. “Deciding who is deserving of being brought into the world based on their inherited characteristics is pure discrimination, to say the least.”

So-called abortion-discrimination laws are being considered around the country. Kentucky lawmakers passed such a bill last month, and the American Civil Liberties Union is suing.

Rep. Chris Taylor (D-Madison) said the Republicans who are pushing it “want to make abortion illegal in every circumstance and will stop at nothing in attempting to do so.”