State of Emergency for 5 Flood-Damaged Counties 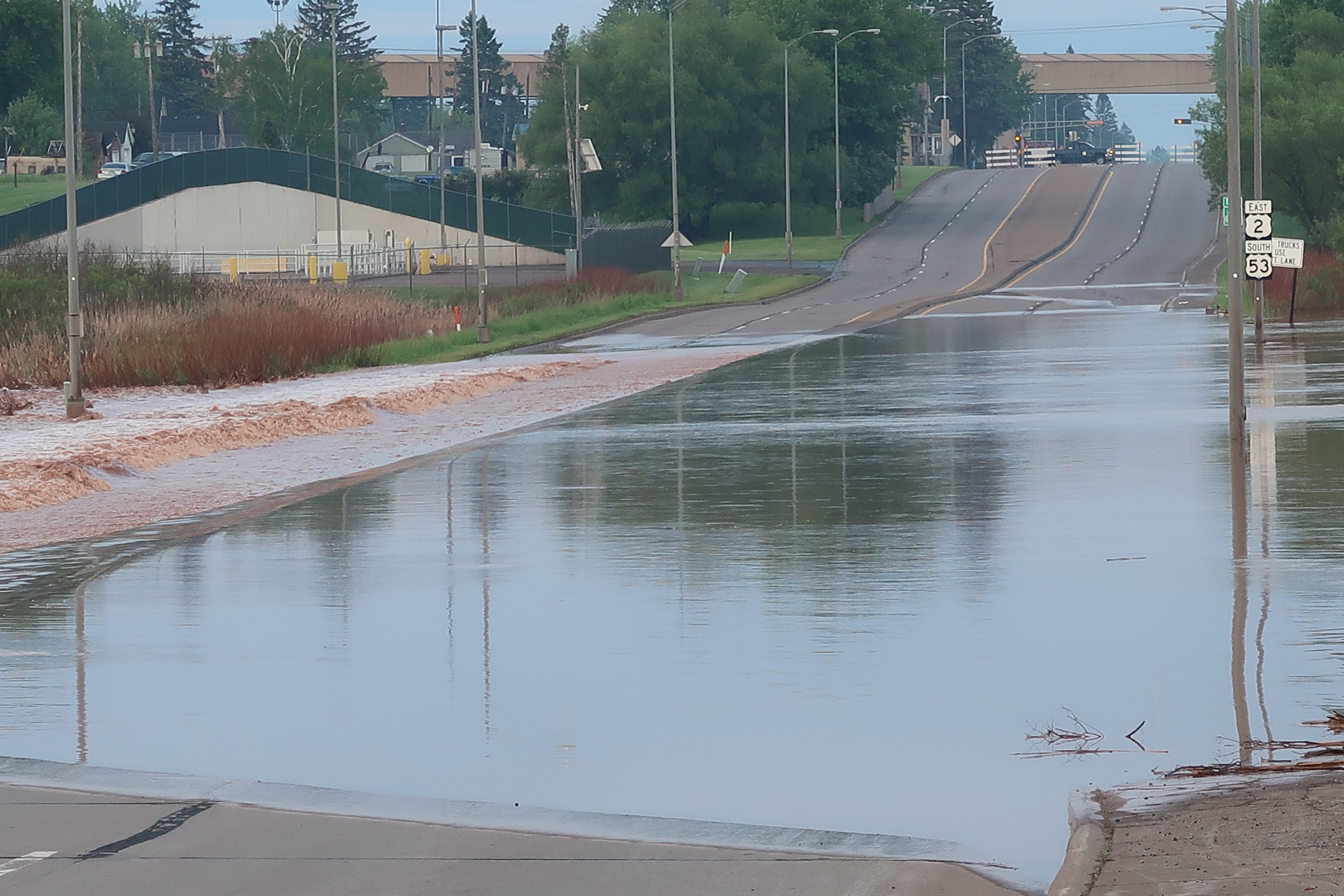 Roads closed in Superior due to flooding after heavy rainfall. Photo by Danielle Kaeding/WPR.

Torrential rainfall and flash flooding took much of northwestern Wisconsin by storm, washing out roads, damaging buildings and leading to the death of at least two people.

While much of that rain has stopped, the aftermath of those storms – and the clean up that will be required – remains unknown. Many major highways remain closed and law enforcement in Douglas, Ashland, Bayfield, Pierce, Iron and Sawyer counties are encouraging travelers to stay off the roads and away from flooded areas.

Gov. Scott Walker declared a state of emergency in Ashland, Bayfield, Burnett, Douglas, and Iron counties Monday evening. Walker stopped in Superior after touring the damage across northern Wisconsin. He said state and local transportation officials are assessing what repairs are needed.

In addition to much of northwestern Wisconsin, heavy thunderstorms also hit the western part of Michigan’s Upper Peninsula hard.

Dan Weingarten, communications representative for the Michigan Department of Transportation-Superior Region, said the flooding is unlike anything he’s seen before.

“Nobody has seen anything like this. It’s absolutely unprecedented. I’ve heard speculation that it’s a 1,000-year flood,” Weingarten said. “The amount of water that came down in a short period of time just wreaked havoc. It’s definitely not anything that we were prepared for, or that anybody could be prepared for.”

The Green Bay School Board voted unanimously to reject paying for armed guards at each of its 40 facilities. Board members argued that money could be better spent on mental health support. Brenda Warren, president of the Green Bay School Board, said it would cost the district $2.5 million a year to station armed guards at all elementary, middle and high schools in the district.

She added that the district’s middle and high schools already have resource officers on site with access to guns. She’d rather see the money spent on current programs that provide mental health care and support social workers.

“Basically social and emotional support for students as opposed to putting armed guards in our schools,” Warren said.

Great Lakes water advocates in Wisconsin will get the chance to oppose a water diversion plan for Foxconn’s LCD-manufacturing plant in Racine County.

The Wisconsin Department of Natural Resources approved the plan in April and granted the hearing last week.

The plan calls for the diversion of seven million gallons a day from Lake Michigan for the Taiwanese company’s $10 billion plant in the Village of Mount Pleasant, with most of the water slated to return to the lake once it has been treated in Racine’s wastewater plant.

Jimmy Parra is an attorney with Midwest Environmental Advocates and said the bulk of the water going to Racine County won’t be for residents, meaning the diversion doesn’t comply with a regional agreement between Great Lakes states.

“What we’re saying is that the compact requires that the water that’s diverted to be used for public purposes,” Parra said. “And here it’s clearly being sent across the basin line for private purposes.”

Parra hopes other Great Lakes states will join in commenting on the Foxconn water plan.

A date for the hearing has not been set.

Milwaukee Bucks rookie Sterling Brown has filed a federal civil rights lawsuit against the Milwaukee Police Department and the city, claiming wrongful arrest and excessive force during an altercation with police Jan. 26 at a drugstore.

The Milwaukee Bucks player was stopped by an officer in January for what started as a parking violation.

Brown, who was parked across two handicap parking spots outside a Walgreens, was surrounded by a handful of officers and tased during the interaction caught on police body cameras.

Thomsen addressed body cam footage that shows an officer pulling out his gun momentarily while speaking to Brown. The officer eventually put the gun back in its holster.

In the lawsuit, Thomsen claims no officers have been disciplined for excessive force or the racially motivated arrest.

Hearing the ‘Cha-Ching’ of Renewable Energy?

“I see this as a big opportunity not only for the state, but for rural economic development. As this technology becomes more affordable, we’re gonna have the ability to become less dependent on foreign oil and other fossil fuels. So, I’m excited,” Testin said.

Tyler Huebner, of the longtime, pro-renewables group RENEW Wisconsin, said that he hopes the potential GOP allies can help remove economic barriers faced by some customers to wind and solar. He also said he hopes Republicans can help electric utilities retire more coal-fired power plants without socking it to ratepayers.

“If indeed the wind and the solar are cost competitive, then we don’t want the change out of the fleet to make customers have to pay more,” Huebner said.

He said his group is looking at how other states are helping utilities deal with so-called “stranded assets,” which are past investments no longer able to turn a profit.