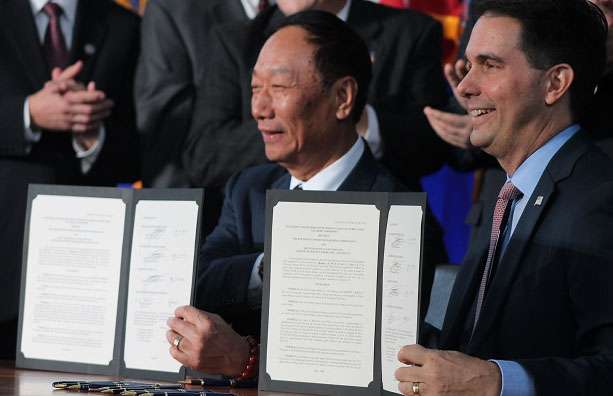 Terry Gou and Gov. Scott Walker at the signing. Photo by Dave Cole/WPR.

Gov. Scott Walker and Foxconn Technology Group Chairman Terry Gou have signed off on a $3 billion contract for the Taiwanese company to build a massive display screen factory in southeast Wisconsin.

Walker and Gou signed a contract Nov. 10 that locks the state into providing up to $3 billion in tax incentives if Foxconn invests $10 billion on a new display screen manufacturing factory and campus near Racine in Mount Pleasant. The Taiwanese company would also have to hire 13,000 workers to get the full benefit.

It is the largest state tax incentives package offered to a foreign company in United States history.

Among the lawmakers at the event was House Speaker Paul Ryan, R-Janesville. He said the LCD technology Foxconn is promising will provide jobs for many people and help convince younger workers to stay in Wisconsin.

“We want to make sure that the kids that are growing up in Wisconsin stay in Wisconsin. You ever heard this term, ‘brain drain?’ This reverses brain drain,” Ryan said. 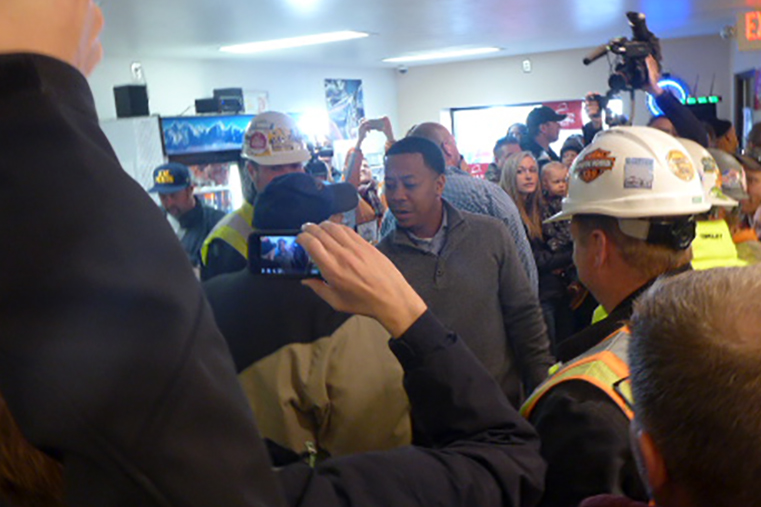 The head of the Wisconsin state firefighters union is running for governor, joining a crowded field of Democrats hoping for the chance to take on Republican Gov. Scott Walker.

Mahlon Mitchell launched his candidacy on Monday with stops in Green Bay, Milwaukee and Madison. He is vying to become the state’s first African-American governor.

Mitchell made a name for himself in the 2012 recall elections when he ran against Lt. Gov. Rebecca Kleefisch.

The 40-year-old Mitchell is a former Madison firefighter.

The Democratic primary is Aug. 14 and the election is Nov. 6.

Industry is celebrating the Legislature’s repeal of a decades-old mining moratorium on sulfide mining, while environmental groups fear the move will mean contamination of Wisconsin’s water resources.

The moratorium required companies that wanted to mine sulfide ores such as copper and gold to prove other mines operated and were closed for 10 years without causing pollution. Lucas Vebber with Wisconsin Manufacturers and Commerce said the Legislature is opening the door to a billion dollar industry.

“We are hopeful that we’ll get a good look from some of these companies who are bringing that investment right now to our neighboring states,” Vebber said.

However, Bill Davis, director of Wisconsin’s Sierra Club-John Muir Chapter, fears the move will lead to contamination of groundwater and surface water.

“It’s going to fall back to local governments to take a look at this and see if there are any ways that they can craft local ordinances or things like that to potentially protect themselves from the adverse impacts of mining,” he said.

The state has four deposits with sulfide-bearing minerals in Marathon, Taylor, Oneida and Forest counties. Sen. Robert Cowles, R-Green Bay, was the lone Republican to vote against the mining moratorium repeal.

A study of Wisconsin land sales found farmland in some counties is worth more if it’s closer to a concentrated animal feeding operation, also known as CAFOs.

The analysis came out of a larger project to combine statewide data on land use, land sales and soil survey data, said Simon Jette-Nantel, farm management specialist for the University of Wisconsin-Extension.

Because CAFOs need large areas of land to spread their manure, Jette-Nantel predicted there would be a relation between farmland value and its proximity to a CAFO. Which is exactly what an analysis of farmland sales from the first six months of 2017 in Barron and Marathon counties found.

“If it is close to a CAFO, it would tend to command a premium. That premium so far from what we’ve estimated could vary somewhere between $400 to $800 per acre,” Jette-Nantel said.

Jette-Nantel said these are preliminary results and there is more data to be gathered.

The longtime federal Perkins Loan Program for college and university students expired at the end of September after a two-year extension in 2015. Higher education officials fear the end of the program could mean a gap in financial aid for low-income students.

The program offers low-interest loans of up to $5,500 each year to students most in need. Last year, public and private universities in Wisconsin awarded 27,513 loans worth roughly $60.5 million, according to the National Association of Independent Colleges and Universities.

The program is often a last resort for students who have few options, said Rolf Wegenke, president of the Wisconsin Association of Independent Colleges and Universities. The association’s 24 private, nonprofit institutions have provided $13 million in Perkins loans to 6,300 students.

A bipartisan group of Wisconsin lawmakers support bills in the U.S. House and Senate to restore the program, but legislation has not advanced in Congress. U.S. Sen. Lamar Alexander, R-Tennessee, has opposed efforts to restore the Perkins Loan Program and blocked a bill introduced by Wisconsin Democratic U.S. Sen. Tammy Baldwin last month. Alexander, chair of the Senate Education Committee, has advocated “a simplified student aid system of one grant, one loan and one work study program.”