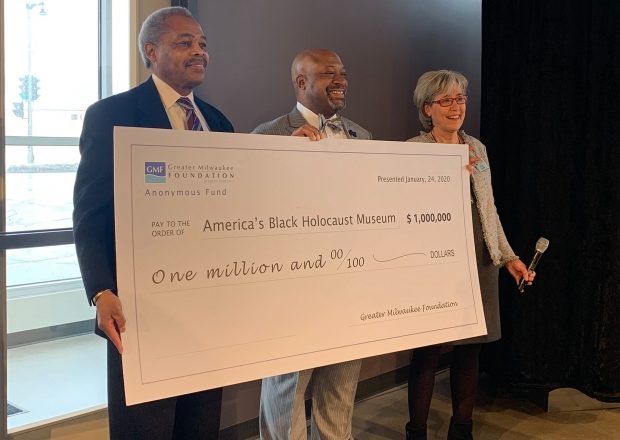 (From left) Ralph Hollmon, board chair of America’s Black Holocaust Museum; Robert Davis, president and CEO of America’s Black Holocaust Museum; and Ellen Gilligan, president and CEO of the Greater Milwaukee Foundation, hold a check for a $1 million grant that the Greater Milwaukee Foundation gave to the museum on Jan. 24. Photo by Alana Watson/WPR.

America’s Black Holocaust Museum (ABHM) in Milwaukee is a step closer to reopening its doors after being closed for more than a decade, thanks to funding from the Greater Milwaukee Foundation.

Lynching survivor James Cameron founded the museum in 1988 as a memorial that promotes racial repair and reconciliation while shining a light on the African-American experience. The museum closed in 2008, two years after Cameron died.

Ground was broken for the museum’s new physical site in 2017, but organizers struggled to open the doors because of a lack of artifacts, exhibits, staff and educational programming.

The Greater Milwaukee Foundation announced Jan. 24 during an event at the museum that through an anonymous donor, the foundation would be granting ABHM $1 million in addition to a three-year, $120,000 grant.

The newly created Office of Rural Prosperity can boost economic opportunities outside of Wisconsin’s big cities if it helps to advance issues such as housing, broadband and other challenges faced by workers and entrepreneurs in small communities.

That’s according to those who work in economic development for small cities and who, this week, offered reactions to Gov. Tony Evers’ announcement of the new office during his State of the State speech.

As part of a slate of policies aimed at helping Wisconsin farmers and rural communities, the governor said he’d work with the Wisconsin Economic Development Corporation (WEDC) to establish the office, which he called a “one-stop shop for folks to navigate state programs and resources tailored to rural communities, businesses and workers.”

Speaking on WPR’s The Morning Show, WEDC CEO Missy Hughes said her agency’s role will be “to be the funnel for those communities, so that they can access all the different resources” that exist for rural communities.

Vice President Mike Pence visited Wisconsin on Jan. 28 to advocate for private-school voucher programs and other school-choice programs across the country.

The event, held in the state Capitol rotunda, was not a campaign rally, but it came two weeks after President Donald Trump rallied supporters in Milwaukee, and amid continued focus by both parties on the importance of Wisconsin in the 2020 presidential election.

The vice president’s appearance was part of National School Choice Week, an advocacy effort intended to draw attention to K-12 education options other than traditional public schools, such as public charter and magnet schools, private schools, online schools and homeschooling.

School-choice supporters argue that school choice offers opportunity for students whose local public school is struggling. Opponents say it degrades the quality of public schools by siphoning money away from the public-school system.

“I’m here in Wisconsin because this is where it all began,” Pence said, referring to Milwaukee’s voucher program, which is the oldest such program in the nation. “Wisconsin has an extraordinary record of success with school choice, and every family in Wisconsin should be proud.”

Wisconsin Public Radio, © Copyright 2020, Board of Regents of the University of Wisconsin System and Wisconsin Educational Communications Board.