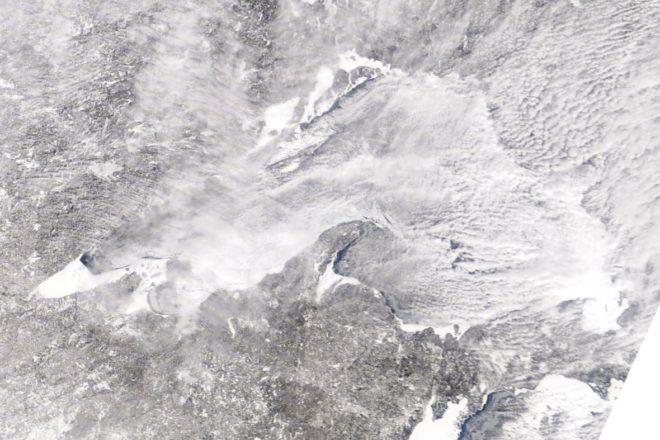 Last year, maximum ice coverage topped out at 77 percent. Wang noted the polar vortex brought colder temperatures that caused rapid freezing on the lake from late January through February. As of Monday, only the southeastern corner of the lake near Michigan’s Upper Peninsula had open water.

Meteorologist Matt Zika with the National Weather Service in Marquette, Michigan, expects ice cover on the lake may grow during the next few days as temperatures remain below freezing.

“We may not get to 100 percent, but definitely probably 95 to 98 percent ice coverage for Lake Superior is doable for this week,” Zika said.

This winter is only the fifth time during the last 20 years when Lake Superior has surpassed 90 percent ice coverage. In 2014 and 2015, ice covered more than 95 percent of the lake. The last time Lake Superior froze completely was in 1996.

Wisconsin’s gas tax would go up by eight cents per gallon, state government would pick up a bigger share of school funding than it has in more than a decade, and Medicaid would be expanded to an estimated 82,000 residents under the state budget proposal unveiled Feb. 28 by Gov. Tony Evers.

Evers’ $83.4 billion, two-year spending plan would also index the gas tax to allow for automatic increases in the future, legalize medical marijuana, restore government funding to Planned Parenthood and take power away from state legislators to draw their own district lines.

He would pay for the changes in a variety of ways, including by collecting hundreds of millions of dollars more from manufacturers and capital gains than the state does right now.

Those ideas and others in Evers’ first budget as governor provide the clearest signs yet that state government is markedly different today than it was during the previous eight years under former Republican Gov. Scott Walker.

“At the end of the day, our budget is about putting people first,” Evers said.

The GOP reaction to Evers’ budget was scathing and swift.

“This is a budget that’s based on somebody who’s spent too much time in Madison,” said Assembly Speaker Robin Vos, R-Rochester. “They have spent time in a liberal bubble, thinking this is what the people of Wisconsin want. It isn’t.”

“To me, it’s a thousand-page press release, not a budget,” said Senate Majority Leader Scott Fitzgerald, R-Juneau. “A lot of the items that the governor ticked off I think were kind of the greatest hits of the Democratic party.”

Fitzgerald said Republicans would set Evers’ proposal aside and build their own budget.

Taiwan-based electronics manufacturer Foxconn Technology Group is moving ahead with plans to open an innovation center in Green Bay that could employ up to 200 people. The company is also poised to receive up to $4.5 billion in state and local tax incentives to build a major factory in southeastern Wisconsin. Another research-and-development center is planned for Eau Claire, along with a headquarters in Milwaukee.

Foxconn will see the full incentives package only if it creates 13,000 jobs. Tom Still, president of the Wisconsin Technology Council, said Foxconn will “have to meet capital-investment goals. They have to meet employment goals year by year by year over the course of a 15-year contract. If they do not produce 13,000 jobs and $10 billion in investment, well, they only get the tax credits that are commensurate with that,” Still said.

Still spoke at an event at the University of Wisconsin-Green Bay aimed at recruiting people to work at the company in the fields of developing glass-panel technology, semiconductors, medical imaging, high-speed communications, biochips and robotics.

The innovation center jobs would be included in the 13,000-job goal that Foxconn must reach in order to receive the incentives.

The Wisconsin Department of Natural Resources is planning to plant 100,000 seedlings this spring through an agreement with Orbridge, a travel company based in Washington state.

Orbridge has donated $45,000 to the DNR to plant the seedlings as part of an effort to reduce the carbon footprint of Orbridge’s worldwide tours. The agreement came together quickly because the company was able to work directly with DNR staff, said Meg Rice, marketing director at Orbridge.

The state Natural Resources Board accepted the funding earlier this year. Orbridge officials said they’re looking to continue the Wisconsin partnership in the future and plan to make similar agreements with other states as well.

State officials said the DNR’s Division of Forestry typically plants about a half million trees a year, so a donation worth 100,000 trees will make a big difference, according to Teague Prichard, state forest management specialist. The planting projects will likely begin this spring.

Wisconsin Public Radio, © Copyright 2019, Board of Regents of the University of Wisconsin System and the Wisconsin Educational Communications Board.