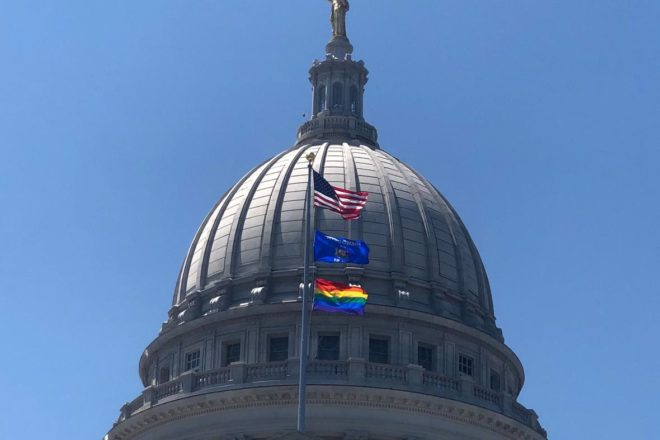 Gov. Tony Evers issued an executive order to fly a rainbow flag over the state Capitol for the remainder of June 2019 in recognition of Pride Month. Photo by Laurel White/WPR.

The Wisconsin Supreme Court has temporarily restored nearly all of the laws Republicans passed in December’s lame-duck session, including one that makes it harder for Democratic Attorney General Josh Kaul to leave or settle federal lawsuits.

The court issued its stay order June 11, a day before the case was set to go to trial in Dane County Circuit Court.

In a 4-3 ruling, the court’s conservatives acknowledged their stay might delay the attorney general’s ability to settle cases where funds are distributed to the public.

“On the other hand … the public as a whole suffers irreparable injury of the first magnitude where a statute enacted by its elected representatives is declared unenforceable and enjoined before any appellate review can occur,” the justices wrote.

Dane County Judge Frank Remington issued a ruling in March that struck down several of the laws, including the one that limited the power of Kaul.

The Wisconsin Supreme Court is also handling the appeal in the lawsuit brought by the League of Women Voters of Wisconsin among other groups. That case contends the entire lame-duck session was unlawful because the Wisconsin Constitution does not explicitly allow for “extraordinary” sessions of the Legislature. The Supreme Court heard arguments in that case last month.

Title, Registration Fees Would Go up under GOP Road Budget

Republicans on the Legislature’s budget committee voted to increase vehicle title fees by $95 and registration fees by $10 to generate money for Wisconsin road projects in the next state budget.

Altogether, the moves would generate $393 million in new revenue for transportation – a total that is about $200 million less than Gov. Tony Evers wanted, but more than in any budget signed by former Republican Gov. Scott Walker. Republicans would also use another $90 million from the state’s general fund to pay for road projects, bringing the total new funding to $484 million.

Evers proposed an eight-cent increase in the gas tax, which is the largest source of funding for Wisconsin’s roads. He also called for a return to “gas-tax indexing,” which would automatically raise the gas tax in future budgets to keep pace with inflation. Those changes combined would have increased the state’s share of the gas tax to 42.5 cents per gallon in 2021 and generated about $527 million for state government.

Evers also called for increasing fees on heavy trucks, which do the most damage to Wisconsin roads, which would have generated about $72 million.

Republicans rejected the gas-tax increase and the fee on heavy trucks. Instead, they voted to raise the current vehicle registration fee from $75 to $85 per year and increase the vehicle title fee from $69.50 to $164.50 – an increase of 137 percent.

Democrats argued Evers’ plan to raise the gas tax instead of title and registration fees was the better approach because it would be paid by everyone who uses Wisconsin’s roads, not just Wisconsin residents.

The LGBTQ flag was raised over the state Capitol building June 7 for the first time in Wisconsin’s history. The flag will fly for the entirety of June, which is LGBTQ Pride Month.

A small crowd gathered outside the Capitol to watch the flag raising, including Clay Thomas of Madison.

“It just kind of means that we are finally represented by our government. They see us,” Thomas said. “We ride on the shoulders of giants here, with how the gay-rights movement has progressed over the years. I think it would be really meaningful to the people who have given so much.”

Deb Dawson, also of Madison, said it was a very personal moment for her as the mother of a gay man.

“Is this any more appropriate than erecting the Christian flag over the Capitol?” state Rep. Scott Allen (R-Waukesha) tweeted.

“The governor’s action today is in no doubt a statement to advance a cause. The only cause that the Capitol flags should represent is 50 states united in one republic,” Craig said.

The city of South Milwaukee is honoring the professional wrestler who “made Milwaukee famous”: Reggie Lisowski, known to wrestling fans as Da Crusher.

Lisowski, a former bricklayer who said he also worked in his teens as a bouncer at his father’s saloon, built his in-ring persona on his real-life Milwaukee roots, winning dozens of championships and thousands of fans in the Midwest and beyond.

Instead of emphasizing his trips to the gym, where he could lift well above his own body weight, Da Crusher told fans he trained for his matches by “carrying kegs of beer up and down the lake banks” and doing the polka with “Polish dollies.”

As for his diet, Da Crusher claimed he’d bulk up ahead of his bouts with “six pounds of Polish sausage a day, [increasing] my beer from a case to a case and a half, and [eating] a lot of mashed potatoes and gravy.”

Da Crusher returned to Milwaukee and lived there until his death in 2005 at age 79, making only occasional appearances at wrestling shows.