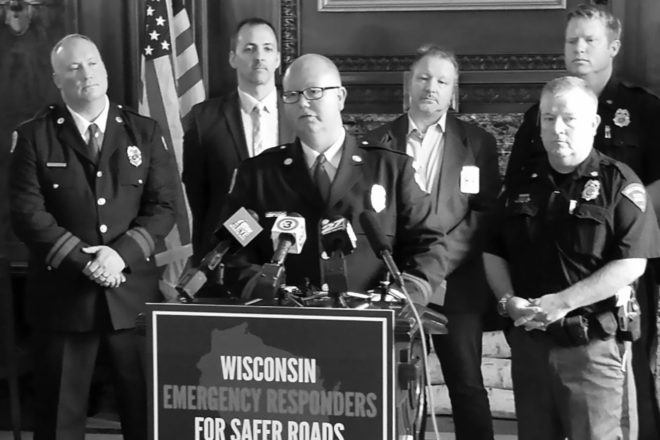 Their call comes two days before the Legislature’s budget committee is scheduled to debate Gov. Tony Evers’ road budget, which would increase taxes and fees to boost road funding by more than $600 million.

The officials say poor road conditions affect how fast they’re able to respond in an emergency and have caused hundreds of tire blowouts.

A panel of researchers has raised concerns about the science behind the U.S. Fish and Wildlife Services’ (USFWS) latest push to remove gray wolves in the lower 48 states from the endangered-species list.

Five scientists were contracted by the USFWS to conduct a 245-page peer review of the scientific argument justifying the removal of federal wolf protections.

The agency is arguing that gray wolves have recovered enough in the lower 48 states that placing management in the hands of states is warranted.

Two of the scientists involved in the peer review are from Wisconsin: Adrian Wydeven, a retired Wisconsin Department of Natural Resources wildlife manager; and Adrian Treves, a University of Wisconsin-Madison professor and founder of the Carnivore Coexistence Lab at the Nelson Institute for Environmental Studies.

In his 11-page summary for the review, Wydeven noted concerns, including a need for more timely data on wolves and confusion caused by how the USFWS uses the term “eastern wolf” in its evidence that wolves have recovered. Wydeven notes the term’s specificity is important because recovery plans for eastern wolves are different from those for gray wolves.

USFWS is accepting public comments on its delisting proposal until July 15.

NASA is using its technology to track blue-green algae blooms around the world. Last year, NASA chose to work with NEW Water – the brand of the Green Bay Metropolitan Sewerage District – to install a monitor in the lower bay of Green Bay that can upload data to satellites and give scientists a chance to analyze it quickly.

Nutrients in the soil that run off into waterways – either into the bay itself or rivers and streams that feed into it – can cause dangerous blue-green algae blooms.

The Great Lakes Fishery Commission has unveiled plans at its annual meeting for a $22 million FishPass project in Michigan that seeks to better combat invasive species by sorting them out from native fish.

Numbers of the invasive sea lamprey are below target levels in some of the Great Lakes while up in others, the Great Lakes Fishery Commission announced at the meeting in Detroit.

Sea lamprey killed five times the commercial harvest – more than 100 million pounds of fish – before the United States and Canada teamed up more than 60 years ago to control the invasive species that feeds on fish, said Marc Gaden, the commission’s communications director. Since then, numbers have been reduced by 90 percent in most areas of the lakes.

Wisconsin Public Radio, © Copyright 2019, Board of Regents of the University of Wisconsin System and the Wisconsin Educational Communications Board.