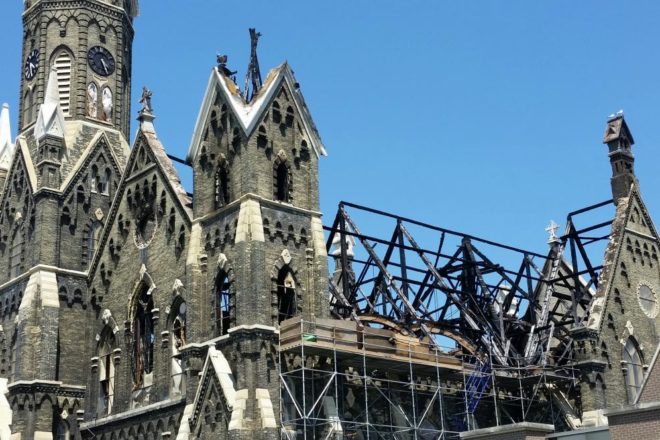 The Wisconsin Supreme Court has voted to raise the hourly rate of pay for court-appointed attorneys from $70 to $100 per hour, a move expected to cost county governments an estimated $32 million per year.

The court’s decision granted part of a petition from a coalition of lawyers and judges who say Wisconsin’s current system for public defense attorneys is so underfunded, it’s facing a constitutional crisis.

But the court’s ruling leaves the pay rate for state-funded public defenders at $40 per hour, the lowest in the nation.

In addition to raising the rate for court-appointed lawyers, Wisconsin Supreme Court spokesman Tom Sheehan said justices denied a proposal to tie future increases to the rate of inflation.

Justices also denied a request to deem the current pay rate for public defenders as “unreasonable.”

A Lutheran leader is promising that services will eventually resume on the site of a historic church that caught fire Tuesday in downtown Milwaukee. Damages to the 140-year-old Trinity Evangelical Lutheran Church were estimated at about $17 million.

Rev. Jonah Burakowski is with the South Wisconsin District of the Lutheran Church-Missouri Synod. He says the congregation is committed to repairing the current church or building a new one on the same site. “They want to gather at the place they know as home,” Burakowski said. “You know, we rebuild cities that flood all the time, because there’s a strong emotional connection and there’s an importance to that.”

Burakowski said a lot will depend on any insurance settlement, and possible fundraising. Trinity is a State Historical Landmark, and is on the National Register of Historic Places.

The University of Wisconsin-Madison’s Institute for Research on Poverty will spend the summer collecting data and trying to identify community members’ needs in an effort to raise 10,000 Dane County families’ incomes by 10 percent in two years.

It’s part of an initiative funded from Schmidt Futures, a venture capital firm. The $1.5-million grant will go to funding project proposals and research. One project will be selected to receive further funding in 2019.

The net income increase could be through a decrease in costs, like transportation or child care, or an increase in income, like wages.

Organizations must work with the university to develop plans to raise income. Ten of those will receive some funding to become full project proposals. From there, Schmidt Futures will select one project to get funding in 2019.

A bipartisan group of freshmen lawmakers in Washington, D.C., including U.S. Rep. Mike Gallagher of Wisconsin, is making a case for congressional term limits with a recent proposal.

Doing so would mean amending the U.S. Constitution – a steep fight that requiring two-thirds support from both the U.S. House and the Senate, as well as ratification by three-fourths of the states. This attempt follows many in the past that faced a stiff pushback.

The group of about half a dozen lawmakers – all less than 50 years old – say term limits will encourage younger generations, who don’t identify with the experience of having one job for decades, to go out and vote.

Wisconsin political leaders are weighing in on the latest version of the Farm Bill in Congress. The U.S. House of Representatives was slated to begin debate on the federal legislation Wednesday. The bill includes funding for farmer programs and the Supplemental Nutrition Assistance Program, or SNAP.

Madison is getting its first-ever professional men’s soccer team. While it doesn’t have a name or mascot yet, the games will be played at Breese Stevens Field.

The first season will start in March 2019.

This is the first Midwest team in the newly founded United Soccer League Division III. Madison is the fourth founding member of the league.

Division III targets cities with populations between 150,000 and 1 million.

Conor Caloia is one of the owners of Madison Pro Soccer, a division of Big Top Events, which operates Breese Stevens Field. He said since Big Top took over Breese Stevens, they needed an “anchor tenant” and Madison had the right facility for the state.

The Madison Common Council approved the venture Tuesday night along with a $1.3 million investment in Breese Stevens Field for facility improvements, like concession stands and seats.