Wisconsin’s “critical access hospitals,” as they are formally known, ranked first in the nation on 28 quality measures for the Medicare Beneficiary Quality Improvement Project. The measures include immunization levels, patient satisfaction, care in the emergency department and transfer of patients needing specialized treatment.

Wisconsin has 63 critical access hospitals, which are defined as having fewer than 25 beds, said Kelly Court, chief quality officer at the Wisconsin Hospital Association. The federal Health Resources and Services Administration assesses these facilities by analyzing data from Medicare patients before ranking them.

Across the nation, rural hospitals have faced financial difficulties, and many have closed. Court said rural hospitals in Wisconsin are faring better than their counterparts across the country.

Wisconsin lawmakers seem to agree on a sizeable increase in public school aid for the next two-year state budget. But they don’t agree on family income limits for the voucher programs that let low- to middle-income students go to private schools at taxpayer expense.

Right now, only families at less than 185 percent of the federal poverty level qualify for private school choice programs.

State Senate Republicans want to raise that to 220 percent, while Assembly Speaker Robin Vos, R-Rochester, favors 300 percent of the poverty level. That’s equivalent to a family income of $74,000 a year.

Under the Senate GOP plan, virtually all of the current $20 million in “sparsity aid” that covers the higher costs of rural school districts would be removed.

A Wisconsin senator wants to create a consortium of private investors to rebuild a dormant gas pipeline. The West Shore Pipeline is used to transport fuel from northern Indiana to Green Bay.

Rebuilding the 650-mile pipeline could cost up to $300 million, but Sen. Roger Roth, R-Appleton, says his role would be that of a “facilitator.”

Built in the early 1960s, the line was shut down in June 2016 after a 2012 leak in the village of Jackson in Washington County. The spill contaminated dozens of private wells along with portions of Cedar Creek and the Jackson Marsh.

The owners of the pipeline did repairs, but decided maintaining the line wasn’t worth the expense.

Now, gas coming to Green Bay arrives by tanker truck or ship, which Roth says drives the price of gas up by about 5 cents a gallon. Roth said he wants to put a group of private investors to rebuild the line at an estimated cost of between $200 million and $300 million.

Roth said no tax money would be involved.

The nonprofit Milwaukee Riverkeepers studied the 2012 gas spill and has concerns about reopening the line, said Cheryl Nenn, a biologist with the nonprofit. 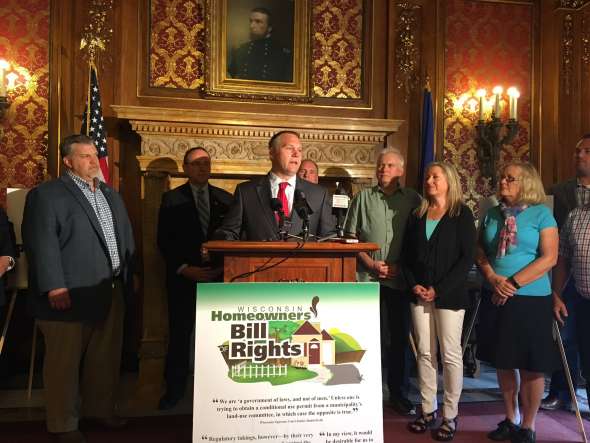 Rep. Adam Jarchow introducing the “Homeowners Bill of Rights” at a Capitol press conference on July 20. Photo by Laurel White/WPR.

Republican lawmakers have introduced a package of bills they’re calling the “Homeowners Bill of Rights.”

“I think where we’re regulating today is just too far, too much over the line,” he said. “So we’re going to, with these proposals, ratchet that back a little bit.”

Jarchow’s proposals would give landowners more power to sell or develop what are called “substandard lots.” Those are pieces of land that met zoning requirements when they were first parceled off, but don’t any more. Right now, that can make them impossible to sell or build on.

The bills have yet to be scheduled for public hearings.

Wisconsin state Superintendent Tony Evers has registered a committee that would let him run for governor as a Democrat.

Evers, who won three statewide elections as Wisconsin’s top education official, first hinted he might enter the governor’s race about two weeks ago. In a statement released July 25, he said he looked forward to making a final decision on the race in the near future.

“As I continue talking with voters about the future of our state, this is the next logical (step) for me to take,” Evers said in a written statement. “My record of public service and leadership on behalf of Wisconsin families, kids and educators brings a unique and different choice for voters. One that I believe provides a compelling alternative to the status quo.”

While Evers has always enjoyed the support of Democrats, his previous runs for office have been low-turnout, nonpartisan contests.

Still, Evers’ landslide victory in April’s election was seen as a bright spot for the Democratic Party coming on the heels of its devastating losses in the November 2016 election.

If Evers runs for governor, he would likely face at least a few opponents in a Democratic primary.

Gov. Scott Walker has not formally announced his plans to seek a third term as governor, but he’s aggressively laying the groundwork for another run. Walker’s campaign raised $3.5 million in the first half of 2017 and had $2.4 million cash on hand.