Under the new law, Wisconsin parents will be able to claim $100 for every child below 18 years old living at home as of Dec. 31, 2017. The sales tax holiday from Aug. 1 to Aug. 5 will exempt some purchases from state sales tax.

“We, at a time when we had a bigger than expected surplus, thought that this was the best, most effective, most efficient way to get those dollars back in the hands of hardworking taxpayers,” Walker said at a bill signing event in Waukesha.

The state Legislature approved the deals in March, after some disagreements over their cost between the state Senate and Assembly.

Walker used his veto power Tuesday to expand the holiday by three additional days, bumping the cost to $14.8 million.

With most of the state under several inches of snow, some Wisconsin farmers are starting to worry about a late start to this year’s growing season.

“The previous few years, people have gotten spoiled and been able to get in the field early,” Bussler said. “But if you look at the five year averages and so on, I think we really aren’t that far behind the normal.”

But Wagner said most farmers like to be able to get into the field as early as possible in the year.

“There’s a number of advantages to planting early, everything from better response to fertilizers to better dry down towards the end of the season in the fall,” Wagner said.

If conditions don’t dry up soon, Wagner said farmers could face long days trying to get crops in at the end of spring.

Marathon County is now the first in Wisconsin to pass an ordinance regulating sulfide mining, following the repeal of the state’s mining moratorium law. Counties have until July 1 to enact their own local regulations before gold and copper mining in the state becomes easier to initiate.

In two public hearings held by the Marathon County Board in March, dozens of citizens and representatives of environmental groups expressed concerns about a gold sulfide deposit in the Town of Easton near the Eau Claire River and the scenic Dells of the Eau Claire county park.

Gibbs said the ordinance was a compromise that provided protections for the environment without an outright ban of gold and copper mining in the county.

Gibbs said county attorneys did not think an outright ban of sulfide mining could survive a legal challenge.

The new ordinance requires a mining company to pay a $50,000 upfront deposit, pay a $15,000 cash bond for each and every well that could be threatened by pollution in the region, and abide by 800 foot setbacks, which Gibbs said are similar to those required for solid waste sites.

The county board unanimously passed the new ordinance 35-0 Tuesday night. 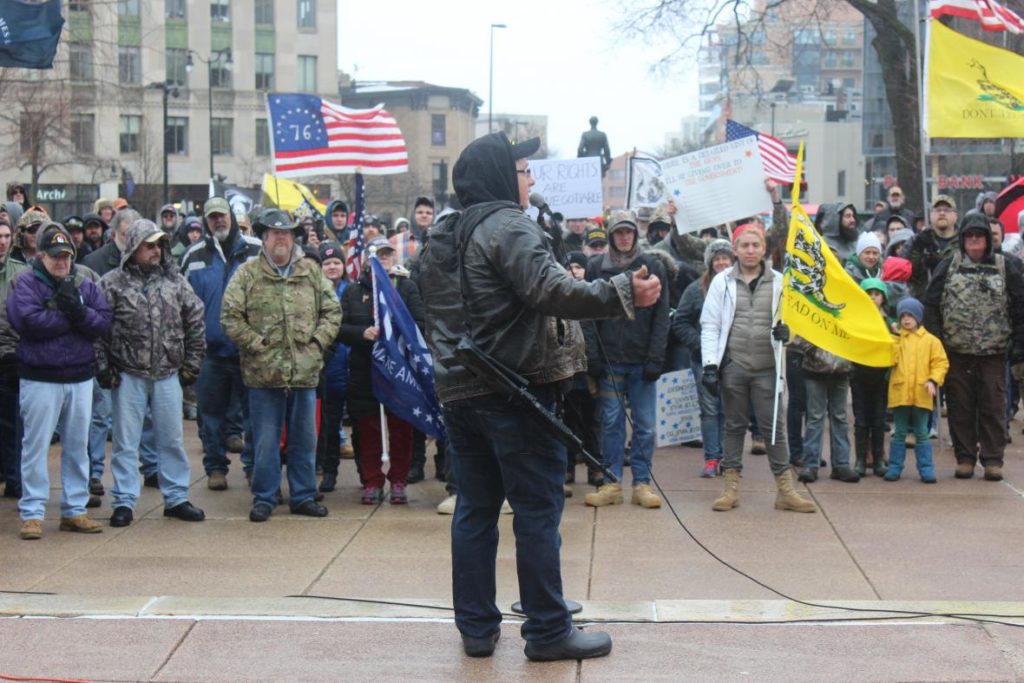 As organizers across the country encouraged gun rights supporters to bring unloaded firearms to state capitals last weekend, about 200 people gathered Saturday on the state capitol grounds in Madison.

Many of them were openly carrying guns. They spoke in support of the Second Amendment, including the right to own assault-style rifles like the AR-15.

The event was organized by the local chapter of the National Constitutional Coalition of Patriotic Americans. Rally organizer Thomas Leager said the rally was planned in response to the March for Our Lives, which drew about 2,500 people in Madison and more in other cities across the state.

“Our voices need to be heard as well in the gun discussion, especially with people who don’t necessarily own or operate guns,” he said.

Gun rights supporter Mike Waddell said he came to the rally to show his support for the Second Amendment.

“There’s been enough protesting going on to remove the Second Amendment,” he said. “I’m a constitutionalist, I believe in all the amendments, and this is just one that needs to be defended.”

Lawrence University to Pay Tuition for Students Who Can’t

Lawrence University in Appleton is joining the ranks of Ivy League schools across the nation in at least one respect: by paying tuition for students who can’t.

Lawrence University is closing in on a lofty goal: it’s nearly reached the level of endowment needed to cover tuition and fees for those who can’t afford the private, liberal arts school where tuition for the 2018-19 academic year will cost $57,816.

In 2014, Lawrence University started a fundraising campaign called “Full Speed to Full Need” with the intent of raising $85 million. The fund now has more than $74 million, and university officials hope to reach their final goal by next year.

“One of the motivations for us to start this campaign is we realized that students who have gaps in their financial aid were less likely to graduate. And that’s important to make sure we support every student and family so they can thrive academically and socially,” said Lawrence University President Mark Burstein.

About 20 percent of those enrolled at Lawrence receive Pell Grants, a federal program for students with financial needs.

Burstein said the university has received 1,000 donations ranging from $5 to $25 million. Many donations are from Lawrence alumni. One of those who gave to the fund is Tom Paulson from Kaukauna, who graduated from Lawrence as a non-traditional student at the age of 32 in 1993 thanks in part to the financial support he received from the university.

Starting this week, public school students in Green Bay will spend an extra three minutes in class every day for the rest of the school year. That’s because the district exceeded its two designated snow days for the year, leaving schools to make up instruction time before summer vacation starts on June 9.

June 11 was originally set aside as a make-up day but Lori Blakeslee, a spokeswoman for the Green Bay Area School District, said administrators opted to spread out the time instead because area summer camps are set to begin that day.

“Students really won’t notice the difference,” Blakeslee said, adding that longer days was the most convenient option from a logistics standpoint.

“We are going to hope we won’t need another snow day,” Blakeslee said.