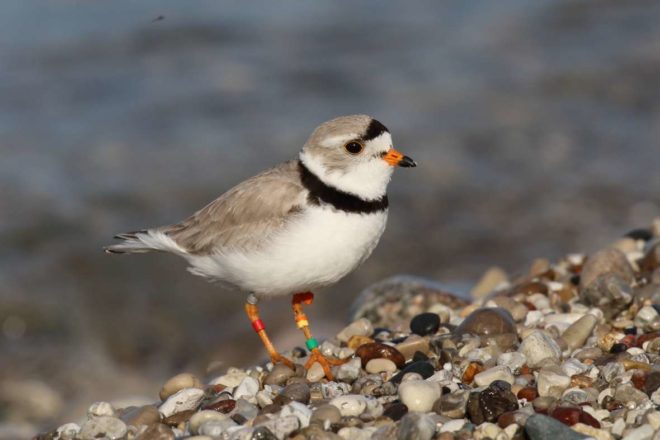 The highest number of piping plovers on the Great Lakes can be found at Sleeping Bear Dunes National Lakeshore in Michigan, where this shorebird was spotted on North Manitou Island. Photo courtesy of U.S. Fish and Wildlife Service.

Some district administrators say state education spending isn’t meeting the needs of rural school districts. While Gov. Scott Walker has pushed for an increase in sparsity aid, Assembly Speaker Robin Vos told WisPolitics last week that he won’t take up the issue when the Legislature resumes in January.

Sparsity aid is for small schools in sparsely populated areas and it’s meant to make up for the disadvantages many rural districts face.

“These are things that impact small schools in a very, very large way. So I don’t know if there’s a fair way to distribute this money, I just know what the needs of rural schools are and the sparsity aid is definitely a help,” Olsen said.

Vos and other Assembly Republicans wanted to help schools by allowing low-spending districts to collect more in property taxes. But Walker vetoed that provision in the final 2017-19 budget.

Using social media to impersonate someone would be illegal in Wisconsin under a proposal state lawmakers took up. Under the bill, online “catfishing” – a common term for using social media, like Facebook or Twitter, to pretend to be someone you’re not – would be a misdemeanor.

Current state law penalizes impersonating someone via email, but social media isn’t included in the statute.

Under the bill, someone who impersonates on social media with the intent to do things like intimidate, harass or defraud could be charged with a crime. They could be fined up to $1,000 and spend up to 90 days in jail.

A northern Wisconsin tribe is asking federal officials to investigate why an Ashland County deputy shot and killed a teen on the tribe’s reservation.

“The tribe would like to take a stand for justice in the tragedy that happened. This is a whole entire community that was affected. It was, of course, the family, but this has affected everybody,” she said. “For what happened to this boy, we don’t want to see that ever happening again here.”

The tribe is requesting the U.S. Department of Justice’s Civil Rights Division to open a criminal civil rights and police misconduct investigation into the deputy’s use of force.

“In their statement, the DOJ attempts to describe Jason as being a troubled young man that acted in a violent manner towards the deputy,” said the tribe in a press release. “The Bad River Tribal Council does not agree with this recent press release, nor the excessive use of force on a minor child.”

“This police brutality has to end, it’s an epidemic in our country and against all Native Americans,” said Holly Gauthier, mother of Jason Pero, in the tribe’s release. “Now our family is counted among them. Many of these killings are unlawful and are not properly prosecuted. Our laws about prosecuting unlawful police conduct need to change, and this has to end now.”

The state DOJ is still investigating the incident and plans to release its findings to the Ashland County District Attorney within the next month.

A shorebird that’s endangered in the Great Lakes region had a record-setting year in 2017. Wildlife officials saw the highest number of piping plovers breeding on the lakes since the bird was listed as endangered in 1985.

Cavalieri, who heads up the shorebird’s recovery on the Great Lakes, said it was the first time since 1955 that piping plovers were breeding on all five lakes.

“That was a pretty big milestone for the recovery program,” he said. “Something we’re certainly happy about, especially going from only occurring in Michigan at the time of listing to now kind of reclaiming a good chunk of their former breeding range.”

Cavalieri credits conservation efforts on the Great Lakes aimed at closing off small sections of beach and providing nesting exclosures that protect the shorebird’s eggs from predators. He said they’ve also been restoring their numbers through a captive rearing program that aims to salvage abandoned eggs.

Wisconsin set a record with eight pairs of piping plovers nesting on the Apostle Islands of Lake Superior and Cat Island chain in Green Bay in 2017.

Lawrence University, a private college in Appleton, has joined 49 other schools in signing an amicus curiae, or “friend of the court,” brief supporting a legal challenge to the proposed end of the Deferred Action for Childhood Arrivals, DACA, program.

The college is Wisconsin’s only higher education institution to sign the brief connected to a suit filed in California regarding President Donald Trump’s proposal to deport DACA recipients – commonly referred to as “Dreamers.” The program was implemented by former President Barack Obama and allows young immigrants who were brought to the country illegally to remain in the United States.

Mark Burstein, Lawrence’s president, said he isn’t legally allowed to divulge the number of Lawrence students who are DACA recipients. Burstein added that he believes deporting people who were brought to the U.S. as minors is wrong and that they should have certain exemptions from immigration rules.