Democratic Wisconsin Congressman Ron Kind says he’s concerned about the Trump administration’s approach to trade as new tariffs threaten the state’s farmers. Last week, Mexico announced 20 percent tariffs on United States cheese and cranberries, along with several other agricultural products. The move was a response to new American duties on steel and aluminum.

Mexico is the top buyer of U.S. cheese and the second biggest export market for Wisconsin dairy products.

Tim Servais is a dairy farmer near Stoddard. He said he’s worried about how the industry will plan for the future.

“Do we pursue this market? Because we don’t even know if we’re going to be dealing with this country down the road. And we have this big market lined up right here, but it might all fall through because of the trade situation,” Servais said.

Servais said domestic consumption of dairy products would not be enough to make up for a major decline in exports.

The data from the federal Bureau of Labor Statistics show Wisconsin added 213,426 private sector jobs during Walker’s first seven years in office, well shy of the 250,000 jobs the governor promised to create by the end of his first four-year term.

The numbers come from the BLS Quarterly Census of Employment and Wages, or QCEW, which economists regard as the “gold standard” of job metrics. From 2011 to 2017, private sector jobs grew by 9.4 percent in Wisconsin, which ranked 34th in the nation.

By comparison, during the same seven-year span, Michigan ranked 15th with a growth rate of 16.2 percent, Minnesota ranked 22nd at 12.7 percent, Illinois ranked 33rd, just slightly ahead of Wisconsin. Only Iowa trailed Wisconsin among its Midwest neighbors, with a growth rate of 8.1 percent, ranking 39th. Wisconsin trailed the nation as a whole from 2011 to 2017. The United States added private sector jobs at a rate of about 15 percent.

The average weekly private sector wage nationwide was $1,064 in 2017 according to the BLS.

Democrats said the numbers showed Walker had failed on the promise that was the centerpiece of his first campaign.

Two liberal groups that are using online voting as part of an endorsement process in the race for governor say they’ve narrowed the field of 10 Democratic candidates to four.

Those who rose to the top in this latest round of balloting include activist Mike McCabe, statewide firefighter union head Mahlon Mitchell, former Madison state Rep. Kelda Roys, and Alma state Sen. Kathleen Vinehout. Vote totals were not released.

Dimitrijevic said the plan now is to invite McCabe, Mitchell, Roys and Vinehout to a four-candidate debate before the next round of voting in July. 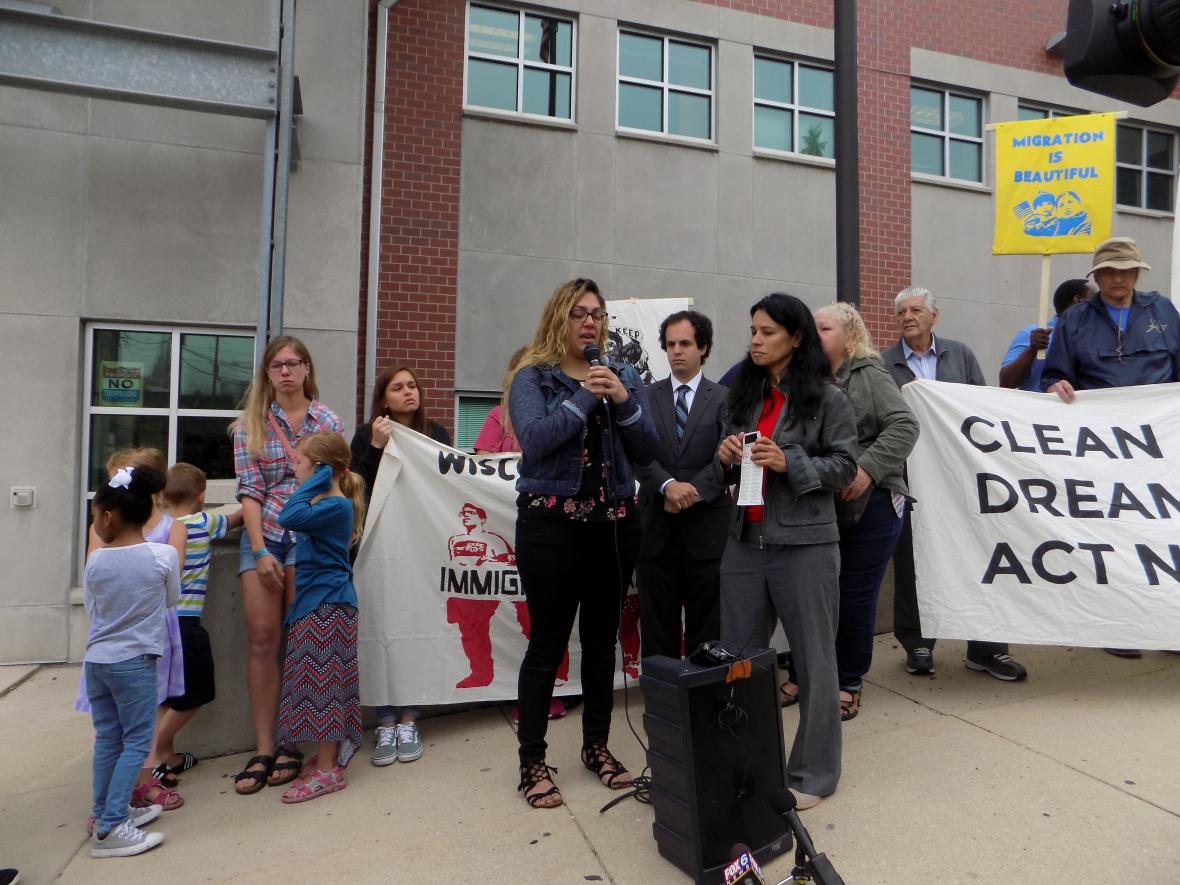 Family and supporters of Franco Ferreyra gathered Tuesday in front of Milwaukee’s office for U.S. Immigration and Customs Enforcement. Photo by Ximena Conde/WPR.

Immigrant advocates are calling for the release of a Waukesha man detained during a check-in with immigration officials in Milwaukee this week. Some attorneys say it’s unusual that the father of four drew the attention of immigration officials only months after a traffic stop. Family and supporters of Franco Ferreyra gathered Tuesday in front of Milwaukee’s office for U.S. Immigration and Customs Enforcement, where he was arrested, to demand his release from Dodge Detention Facility.

Ferreyra has been living illegally in the United States for more than 16 years, first entering the country in 2001 under the Visa Waiver Program. The program only allows people to enter the country without a visa for 90 days, after which visitors can be sent back to their native country. Ferreyra, who was 13 when he came to the U.S. from Argentina with his father and sister, married and had children since then.

Matthew Luening, Ferreyra’s attorney, said ICE officials came after his client just months after Ferreyra was cited for driving without a license.

“I’ve seen that happen quite a bit lately where there’s a rather benign encounter with law enforcement for something like driving without a license, but it turns into information being shared with Immigration and Customs Enforcement,” Luening said.

Ferreyra was working with immigration officials for months to sort out his legal status, Luening said, adding that his client would qualify for status under the Deferred Action for Childhood Arrivals program.