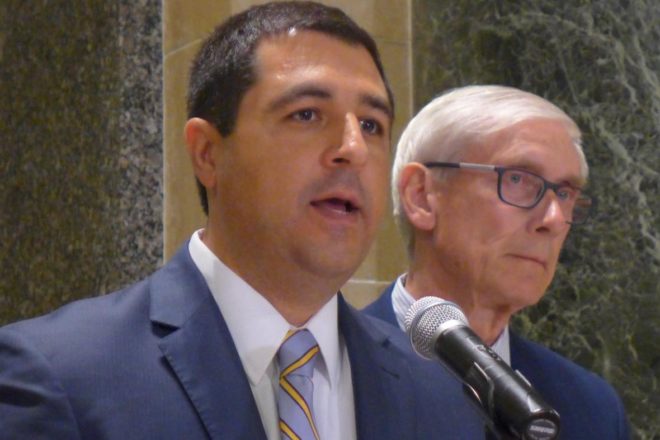 Attorney General Josh Kaul (left, with Gov. Tony Evers) said the opioid epidemic has shattered lives and strained communities across the state. On May 16, he announced a lawsuit against the maker of the powerful and addictive opioid OxyContin. Photo by Shamane Mills/WPR.

Republicans on the Legislature’s budget committee have voted to increase state tourism funding, though not by as much as Democratic Gov. Tony Evers wanted. The GOP plan would spend an additional $1.6 million on tourism marketing during the next two years, which is about a 42 percent increase over what the state spends now.

The Wisconsin Department of Tourism would not be allowed to use the funds immediately. Instead, the extra money would be set aside in a fund controlled by the Joint Finance Committee, giving lawmakers more control over how it would be spent.

The GOP plan was about $436,000 less than Evers proposed in his budget for ongoing tourism-marketing funding. Republicans also rejected Evers’ plan to spend an additional $3 million in one-time funding to market Wisconsin in connection with the 2020 Democratic National Convention in Milwaukee and the 2020 Ryder Cup at Whistling Straits Golf Course in Sheboygan.

The GOP motion passed on an 11-4 party-line vote.

The University of Wisconsin-Superior bought a facility from a Washington, D.C.-based nonprofit to conduct large-scale testing of ballast water treatment systems. It’s the only land-based facility on the Great Lakes that tests whether treatment technologies successfully prevent the spread of invasive species through ships’ ballast water.

UW-Superior reached a deal in April with the Northeast-Midwest Institute, a policy and research group that promotes economic and environmental issues across 18 states. The two parties declined to comment on the amount for which the facility was sold.

Northeast-Midwest Institute had a cooperative agreement with the Maritime Administration (MARAD) to conduct its ballast water testing program, but when that agreement ended, MARAD approached UW-Superior to operate the testing.

In 2017, UW-Superior struck up an agreement with MARAD to continue lab tests of treatment systems through its newly created Great Waters Research Collaborative, but transfer of the facility took two years.

Separate lawsuits are also being filed in Iowa, Kansas, Maryland and West Virginia. Wisconsin and the other states claim Purdue’s advertising strategy downplayed the harm of the popular and powerful opioid and that marketing was approved by the company’s former president, Richard Sackler.

“With these five states filing suit, I hope we are sending a clear message about the seriousness with which AGs and states around the country are taking these cases,” Kaul said.

Last month, the company agreed to pay Oklahoma $270 million. It was the first settlement of more than 1,600 lawsuits pending.

Wisconsin wants a permanent injunction to stop what it calls deceptive marketing practices. It’s also seeking compensation for harm to residents along with civil penalties. In 2015 alone, the opioid crisis was estimated to have cost Wisconsin $10 billion in health care, worker productivity and criminal-justice services.

While a growing number of lawsuits have been filed over a chemical in Roundup, new survey data show many Wisconsin farmers still use the herbicide.

The National Agricultural Statistics Service (NASS) found 42 percent of corn acres and 67 percent of soybean acres were treated in 2018 with a type of glyphosate, the active ingredient in Roundup.

A California court awarded more than $2 billion to a couple who claim the herbicide caused their cancer. It’s the third case decided against Bayer, the parent company of Roundup maker Monsanto.

The NASS survey found 97 percent of planted acres of corn and 98 percent of planted soybean acres in Wisconsin were treated with some type of chemical herbicides last year. The rates match the percent treated throughout an 18-state region included in the survey.

Net-Zero Carbon by 2050 Is Feasible

Madison Gas & Electric’s new goal of net-zero carbon electricity by 2050 is feasible, according to two environmental-studies researchers at UW-Madison. The utility announced it will take on what MG&E Chair, President and CEO Jeff Keebler called an “aggressive” carbon goal, requiring “technologies not yet commercially available or cost-effective.” It also said it will partner with UW-Madison to ensure it abides by the most current climate science.

Tracey Holloway, a professor in UW-Madison’s Nelson Institute for Environmental Studies, is one of the researchers who favors the plan and is lending her expertise.