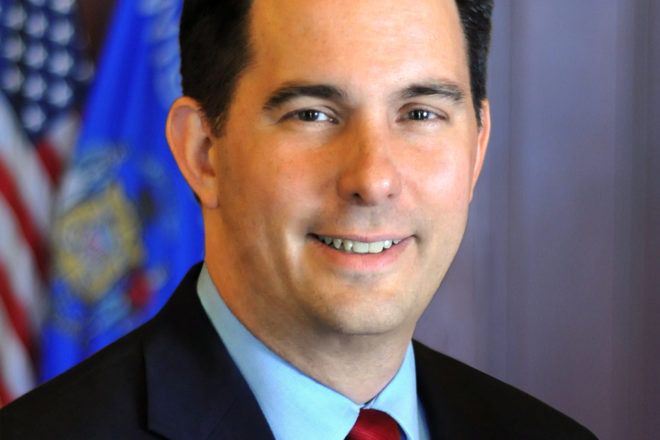 Thanks to a federal waiver from the Affordable Care Act, the state will use $200 million in state and federal funds to cover some insurer costs.

The federal waiver was approved by the Legislature in February and then approved by the federal government. It will create a reinsurance program for people on the individual market and will cover some insurer costs.

“We just wanted to fix as much as we could. The problems that people face today and so presumably five years from now, there will probably be some changes we can adapt to, but in the meantime we want to give people meaningful relief so that premiums will go down,” Walker said.

The Democratic Party of Wisconsin issued a statement, calling the move “sabotage of the health care law.” DPW claimed Walker has refused to expand BadgerCare and supports a lawsuit that would end protections for people with pre-existing conditions.

The top Republican candidates for U.S. Senate both declined to name any areas where they disagree with President Donald Trump at a debate last week, saying Trump needs to be given room to negotiate.

Marine veteran Kevin Nicholson and state Sen. Leah Vukmir were both asked repeatedly whether there were issues where they’d push back against Trump. Both declined to name any.

“The president’s done good work, and we should applaud him for it,” Nicholson said.

“He’s standing for our country,” Vukmir said of Trump. “He’s doing exactly what he promised.”

Trump has not endorsed either candidate in the race.

Walker has not formally endorsed Vukmir, but his wife, Tonette Walker, has. Their son, Alex Walker, works for Vukmir’s campaign.

Wisconsin state Superintendent of Public Instruction and Democratic gubernatorial hopeful Tony Evers is asking the state to increase special education funding by $600 million in the 2019-21 state budget. That’s a giant increase to the current base funding for special education which is less than $369 million.

The state funds special education through a reimbursement method, and according to DPI, reimbursement rates in Wisconsin have not kept up with inflation or demand. DPI and public education advocates argue local school districts have had to make cuts elsewhere in their budgets in order to meet the needs of students with disabilities.

As Gov. Scott Walker seeks re-election, he’s been campaigning as an “education governor” because of the additional funding he’s set aside for public schools and technical colleges. But critics, including Evers, have argued previous budgets have not made education a funding priority.

Communities in northern Wisconsin are working out their next steps following a recent law change that will once again give companies an easier time moving forward with plans to mine metals such as copper and gold.

A repeal of a decades-old sulfide mining moratorium took effect on July 1. The moratorium required mining companies to provide proof of a sulfide mine that had operated for 10 years and been closed for 10 years without doing environmental harm before a new permit could be issued – a bar set high enough to effectively block any new mining.

Industry advocates and other supporters of the repeal contend it will allow companies to construct mines that will bring economic prosperity to their regions, while opponents fear mining sulfide minerals will lead to contamination of surrounding water resources.

Oneida County held a series of meetings after the moratorium was lifted to review its metallic mining ordinance, which was updated in recent years after mining company Tamerlane Ventures, Inc. expressed interest in the county’s Lynne deposit in 2009. Around 5.6 million tons of zinc sulfide ore, lead and silver could be extracted from county land through an open pit mine.

The county’s zoning director Karl Jennrich said the county hired outside counsel to review its ordinance to see if it would withstand a legal challenge.

Marathon County was the first in Wisconsin to pass an ordinance regulating sulfide mining after the moratorium was lifted. Toronto-based Aquila Resources conducted exploration of Marathon County’s Reef Deposit in 2011. The Canadian company recently received its final permit with conditions from the state of Michigan to construct the Back Forty mine on the Wisconsin-Michigan border.

Aquila also conducted exploration of Taylor County’s Bend Deposit in 2011, which is estimated to contain more than 4 million tons of ore.

Other counties have been drafting ordinances now that the moratorium has been repealed.