Gov. Scott Walker has signed nine bills into law that limit the state’s welfare programs, including increasing the work requirement for food stamp recipients and imposing it on parents for the first time.

The Legislature passed the bills in February, with Democrats united against them. Walker championed the new laws he signed Tuesday as the latest examples of Wisconsin leading the nation in changing the state welfare system to put more people back to work.

Walker says the new laws will provide needed training and assistance to help people re-enter the workforce and be independent.

One of the bills signed into law Tuesday implements drug testing for people who want to live in public housing. The bills would also increase from 20 to 30 hours a week the time that able-bodied adults, and now parents of school-aged children, have to be working or in job training to receive food stamps. 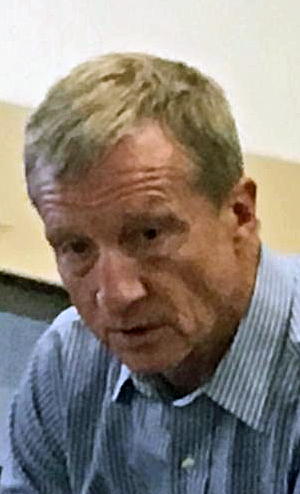 Billionaire liberal activist Tom Steyer spoke Tuesday on the University of Wisconsin-Madison campus about his multi-million dollar push for progressive candidates and causes in Wisconsin.

Steyer is a hedge fund manager who has made a name for himself by funding liberal political causes across the country, including a push for the impeachment of President Donald Trump.

Speaking to college students at UW-Madison, Steyer said he’s going to spend millions more in Wisconsin before November, because he considers it a hotbed of conservative ideas that need to be stopped.

“If there’s a state where what I would think of as radical right policies have been enacted more than Wisconsin, I’m not sure what it would be, outside maybe the deep South,” he said.

Steyer said he’s spending money across the country to flip Congress to Democratic control in 2018, but he considers his spending in Wisconsin to be about more than just control of the U.S. Capitol.

“What we see is a state which traditionally has been somewhere between purple and blue and has had famous progressives, here now is a beacon of radical right-wing thought supported by the Koch brothers,” he said. “So why do we care about Wisconsin? That’s why.”

Wisconsin residents voted overwhelmingly last week to save the state treasurer’s office – a move some are calling another sign of a building Democratic wave in 2018. To make it on the ballot, the proposal had to pass two consecutive sessions of the state Legislature, which it did with bipartisan support.

Mordecai Lee, professor of political science at the University of Wisconsin-Milwaukee, said the results show liberal voters chose to look at the referendum as a way to push back on the Republican leaders who have recently supported it, including Gov. Scott Walker.

Opponents had also argued maintaining the office preserves an important check on executive power, because the treasurer sits on the three-person state of Wisconsin Board of Commissioners of Public Lands.

Under the proposal, the treasurer’s spot would have been transferred to the lieutenant governor, a seat currently held by Republican Lt. Gov. Rebecca Kleefisch.

Lee said the strong vote against the referendum could be another sign that Republicans are in trouble leading up to November’s general election, because it shows effective organization and energy on the left.

The filing deadline for candidates to join the November election is June 1.

Two Wisconsin cities are pushing back on the federal government’s move to roll back fuel efficiency standards for cars.

Officials in Madison and La Crosse are decrying the move, announced by the Trump administration last week, as one that will hurt Wisconsin’s economy and endanger the health of Wisconsin residents.

“Why would we want to go back to a time when we are letting car emissions pollute and make people sick?” said Rep. Chris Taylor, D-Madison. “It’s really kind of mind boggling.”

The Trump administration said it will move away from clean car standards set in motion by the Obama administration in 2012. Under those rules, new cars manufactured in the United States would need to average about 54 miles per gallon by the year 2025.

The current administration argues those standards are too burdensome for auto manufacturers.

One of  Wisconsin’s largest coal-fired power plants, We Energies’ Pleasant Prairie facility in Kenosha County, has permanently shut down about a week ahead of schedule.