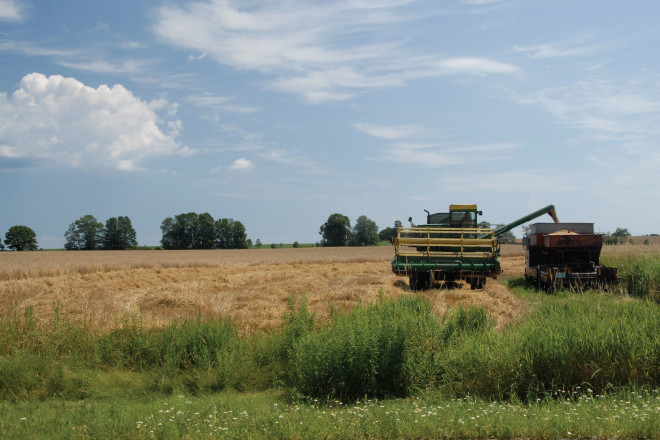 Farming remains integral to the life of Southern Door residents, but has slowly disappeared in Northern Door. Photo by Dan Eggert.

Wisconsin farmers will receive an average of $39 per acre for this year’s crop under the U.S. Department of Agriculture’s tariff-relief program. The newly announced Market Facilitation Program rates for nonspecialty crops such as corn and soybeans are based on county – a change from last year’s program, which provided payments based on total yields.

Milwaukee County had the highest payment rate in Wisconsin, at $59 per acre, with Kenosha, Racine and Rock counties right behind at $58 per acre. Ashland, Bayfield and Iron counties had the lowest, at $15 per acre.

Paul Mitchell, director of the Renk Agribusiness Institute at the University of Wisconsin-Madison, said the rates are based on the average yield of crops in each county and how much prices have been affected by increased tariffs from China and other trading partners.

“I was very surprised to see Milwaukee County at the top, and I’m not really sure why – which crop it was that had a high yield and a high price impact,” Mitchell said.

He said northern counties tend to have lower crop yields, which likely influenced those rates.

Ensuring that well users in rural Wisconsin have clean drinking water will require changes in how farmers spray and store fertilizer.

That was one of the messages from scientists who testified last week in Stevens Point before the Assembly’s Water Quality Task Force. It was one in a series of meetings of the bipartisan task force, which was convened in January in response to reports of contaminated wells across southwestern Wisconsin.

One message from multiple people who testified was that protecting Wisconsin’s groundwater from contamination could require uncomfortable changes to farming practices.

George Kraft, a UW-Stevens Point emeritus professor of water resources, said one problem is that the costs of pollution are externalized.

“It’s people with wells. It’s the waterways that become high in nitrate. It’s the dead zone in the Gulf of Mexico. And that’s disconnected from where the nitrate pollution is being applied,” Kraft said.

Milwaukee is creating its own Green New Deal, but leaders said their version will have “more teeth” than the federal version. The joint city-and-county plan aims to reduce racial and income inequality by creating a new labor market of green jobs.

During a July 25 press conference at the Milwaukee County Courthouse, Milwaukee County Supervisor Supreme Moore Omokunde said one of the criticisms of the federal proposal is the structural details.

“Local government is where things need to take place,” Omokunde said. “This is our attempt at looking at how jobs and economic equity and climate change can meet and be tackled at the same time.”

The Milwaukee City-County Joint Taskforce on Climate and Economic Equity will lead the way in mapping out the city’s Green New Deal. The group will convene area leaders during the next six months to make recommendations to achieve net greenhouse-gas emission reductions of 45 percent of 2010 levels by 2030 and achieve net-zero greenhouse-gas emissions by 2050 or sooner.

“We have about 11 years to dramatically change our whole economy – that is a massive undertaking,” said Robert Kraig, executive director of Citizen Action Wisconsin. “At a national level, we are taking no action whatsoever. In Wisconsin, half of the government will not act either, so local governments have stepped up to the plate.”

Democratic lawmakers are renewing a push to allow felons to vote immediately after they are released from prison. Wisconsin Democrats have backed the idea for more than a decade, saying that state law that prevents those on probation or parole from voting disproportionately affects African Americans.

Sen. Lena Taylor (D-Milwaukee), one of the bill’s sponsors, said about 65,000 Wisconsin residents are temporarily barred from voting because of a past conviction.

“These same people work, pay taxes, pay rent, own homes … They are impacted in the same manner and deserve the same voice,” Taylor said. “But in Wisconsin, those persons, those residents, are treated like the walking dead.”

According to the National Council of State Legislatures, 14 states and the District of Columbia restore voting rights to felons immediately upon release.