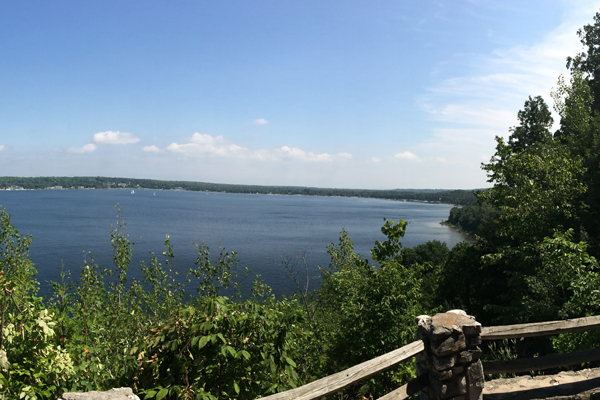 The view from Eagle Terrace, overlooking Ephraim Harbor. The stone overlook was constructed by members of the Civilian Conservation Corps in 1935. Photo by Myles Dannhausen Jr.

Almost 75 years after the enormous labor of the Civilian Conservation Corps (CCC) finished, their efforts still provide the base of some of Wisconsin’s most cherished attractions.

Peninsula State Park was just 23 years old in 1933, when President Franklin D. Roosevelt created the CCC as one of the first New Deal programs. As the Great Depression dragged on, nearly a quarter of the labor force was unemployed, and rural areas were hit especially hard. Roosevelt saw the CCC as a way to combine his interests in conservation and job creation.

Government projects moved quickly in those days. Congress approved the program in just four days, and from the president’s inauguration on March 4, 1933, to the induction of the first CCC enrollee, only 37 days had elapsed.

The CCC existed for just eight years but made an indelible impact. Nearly three million young men built more than 800 parks and planted nearly three billion trees nationwide. Chosen from families on welfare rolls, only 11 percent were high school graduates, and three percent were functionally illiterate. The camps operated under military authority and were often referred to as “the peacetime army” or “the tree army.” The men lived in tents or rough wooden barracks, did hard physical labor in the outdoors and earned $30 a month – $25 of which went directly to their families back home. Most of the participants stayed from six months to a year, with a two-year maximum allowed.

Camp Peninsular, located just northwest of Gibraltar High School in Peninsula State Park, was one of about 100 CCC camps in Wisconsin. It began operation on Aug. 12, 1935, and soon had a complement of 200 workers. They put in 44 hours a week of hard physical labor. Local contractors and carpenters created a 16-building campus, including tarpaper-covered barracks, a mess hall and kitchen, latrines, quarters for officers and foresters, an army office and orderly building, a medical facility, a bathhouse and a warehouse.

In Door County’s Emerald Treasure, William H. Tishler’s excellent 2006 history of Peninsula State Park, he wrote, “The men completed two and three-quarters miles of park roads and thirteen and a half miles of foot and pony trails, a large stone and frame bathhouse at Nicolet Bay and four comfort stations, three parking areas of about one and a half acres each, erected new speed limit and directional signs, established eight acres of picnic grounds, modernized 40 campsites for tents and trailers, many with individual fireplaces, improved 1,500 feet of beach at Nicolet Bay, constructed 40 combination tables and benches for picnic areas.”

They also cleared an acre of land and erected a ski slide and toboggan run between Skyline Drive and Hidden Bluff Road, cleared 200 acres of poison ivy and spent thousands of hours fighting fires locally and elsewhere.

All this was accomplished in just 22 months. In April 1937, hundreds of county residents attended a celebration of the fourth anniversary of the founding of the CCC, and the Sturgeon Bay Postmaster Harry Jones said the young men “had won the respect of all with whom they came in contact.”

Yet, just two months later, on June 30, 1937, Camp Peninsular was disbanded. Likely, it might have continued until the CCC program ended in June 1943 – a casualty of WWII – but the camp had been a source of controversy from the beginning. Ephraim and Fish Creek residents had expressed concerns about its location. There was concern about the safety of the young women at Camp Meenahga that had been established in the park in 1916. Some local organizations, at times both the Door County News and the Door County Advocate, and especially Jens Jensen, founder of The Clearing, and Park Superintendent A. E. Doolittle voiced strong (and generally unfounded) criticism.

Some of the opposition was based on fear that the park might end up under federal control. Doolittle, upset by the loss of authority, was bitterly opposed to many of the CCC projects. Although praised by many for what it had accomplished, the CCC Camp was given just two-weeks’ notice in mid-June 1937 to become the first in Wisconsin to shut down.

Kathleen Harris, Peninsula Park’s naturalist since 1998, enjoys pointing out remnants of the CCC work still in the park. The most notable are the stone walls and the Panorama, a stone overlook near Eagle Bluff, with views of Eagle Harbor and the islands in the bay.

Remains of the old toboggan run are visible near the nature center and foundations of some camp buildings remain behind Gibraltar High School. Although they are quite overgrown, Harris points them out when conducting tours there. The red pine tree plantation behind Gibraltar was planted by CCC workers. The concession building at the beach was also a CCC project. Although the outside has been sided over, visitors can see the original fireplace inside.

The most beautiful building remaining, Harris said, is the stone garage in the maintenance area of the park, not open to the public. Its original plans by William Bernhard, the architect who also designed the Ephraim Village Hall and the Door County Historical Museum in Sturgeon Bay, were just recently discovered in park archives.

Harris said one of the major accomplishments of the CCC program was less tangible. “In the late afternoon and after supper, the men were offered a wide range of academic classes – some even on the college level. They were taught by the camp administrators and community residents, including Michael Madden, John Pivonka and Mildred Carlson. Those who completed the requirements received a GED. And if they were later drafted or enlisted, they went in as corporals.

“The CCC educated a whole generation of men!” Harris said.