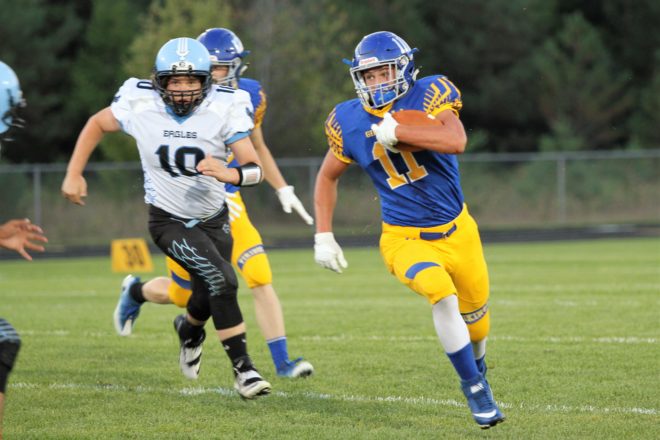 Alex Laughlin has powered the Vikings with 802 yards receiving and 10 touchdowns. Photo from a 2018 game by Deanna Reinhardt.

Just four quarters – one game – into the season, the Gibraltar football team had some tough decisions to make. Although it may seem absurd to be at a crossroad so early in the season, a 54-6 loss to Florence to open the season left the Vikings wondering about their identity.

“They had to determine what type of team they wanted to be,” Coach Mike Peck said. “After that game, they decided they were done just taking punches. They have now decided that for every punch we take, we want to punch back twice as hard.”

The Vikings have responded with five consecutive victories, including a 38-14 win over St. Thomas Aquinas on Sept. 27. And although the Vikings have improved all facets of the game, it’s quarterback Luke Steebs and wide receiver Alex Laughlin who have sparked an offense that has averaged more than 45 points per game since the opener.

Steebs has thrown for 1,118 yards, 14 touchdowns and only five interceptions. After throwing for 111 yards and an interception in the opener, Steebs has averaged 218 yards during the Vikings’ winning surge. Steebs, a junior, has also scored four running touchdowns.

“Luke is very good at extending plays, which gives me more time to find an open spot down field,” Laughlin said. “We grew up together, played every sport together and basically [have] been through everything together. Having this natural chemistry made it a very easy transition, moving on from having Trevor Reinhardt as my quarterback last year.”

After grabbing only one catch for 10 yards against Florence, Laughlin produced four consecutive games of more than 100 yards. Laughlin has caught 31 balls for 802 yards and 10 touchdowns. Laughlin, a junior, has also scored five running touchdowns and turned in 68 tackles on defense.

“His ability to play the ball in the air makes him very tough to stop,” Steebs said. “Also, his route running makes him hard to stay with one on one.”

And solid performances have not been limited to Steebs and Laughlin. Brandon Stillman and Connor Duffy led the Vikings in tackles with 85 and 50, respectively. Stillman has 290 yards rushing and three scores, plus 242 yards receiving and two scores. Marcus Reinhardt has 105 receiving yards and two touchdowns.

“Our offensive and defensive lines have made tremendous strides since week one,” Steebs said. “We lost a lot of seniors last year, and it took a little bit to get into the swing of things. Our team chemistry has come a long way.”

Gibraltar sits in a first-place tie with Suring in the MONLPC-8 standings with a 5-1 mark, and Wabeno-Laona is a game behind at 4-2. The Vikings stopped Suring 43-24 and defeated Wabeno-Laona 28-24.

The Vikings travel to Algoma Oct. 4 before they finish the season at home against local rival Sevastopol and on the road against Wausakee.

“This team will continue to strive to be better tomorrow than we were today,” Peck said. “With that mantra, the sky just may be the limit for this group of kids.”