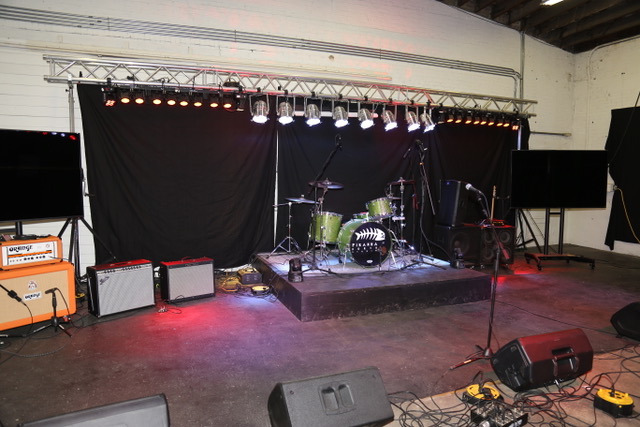 Sturgeon Bay has long hosted a thriving arts and performance scene and has been a perfect place for cross-genre collaboration, all of which has lent itself to forming the Sturgeon Bay Creative District.

“The mission of the Creative District is to collaborate and cross-pollinate mediums,” said Stephanie Trenchard, who creates works in glass at Popelka Trenchard Glass gallery and studio, and has a painting studio at the Tambourine Lounge, next to the Holiday Music Motel.

“It has performance spaces and studios, office space, and audio and video recording facilities,” she said.

The city’s Creative District is newly marked by signs that are a part of the new Wayfinding sign system the city began installing last year. Centered on 2nd Avenue, it began to come together several years ago when the Popelka Trenchard Gallery, the Lockwood Gallery and the Holiday Music Motel group got together, said Margaret Lockwood, whose gallery is on the corner of 2nd Avenue and Michigan Avenue.

On the lower level of Lockwood’s gallery is a small theater space and performance incubator called Inside/Out started by Lockwood’s husband, Allin Walker.

“It invites people to come and do performance things that they have always wanted to do but never had a safe space to do it,” Walker said.

The incubator has been the venue for poetry readings and musical performances. It also serves as Isadoora Theater’s rehearsal and performance space, and provides a home for the Door Knockers, an improv group.

True to his desire to provide a safe space for trying new things, Walker created a puppet play about Robert Kennedy’s appearance on the Johnny Carson Show during a week when Henry Belafonte hosted. Some say this run on the Carson show was one of the most historically important in the show’s history, but very little record of it remains because the network had a habit of recording over old tapes – and thus the puppet show was born.

“I am not a screenwriter or puppeteer, but I just thought, how badly could it go?” Walker asked. “It turned out okay.”

The back wall of the studio is painted with blackboard paint so that Isadoora can draw the set – an airport terminal in one play – and stick a table and chairs for actors in front of it.

“Next summer, the performance space could spill onto the terraced backyard and accommodate attendees with blankets or lawn chairs while keeping to safe distancing,” Walker said.

Musicians and audio-recording professionals work together all the time, and in Sturgeon Bay, this collaboration is especially evident during three annual songwriting marathons: the summer Steel Bridge Songfest, Dark Songs around Halloween, and Love on Holiday near Valentine’s Day.

Every year, for a bit more than a week, the Holiday Music Motel is closed to paying guests and reserved for musicians, who are lodged and fed at no cost. Over the years, the guest musicians have written more than 1,400 songs.

Across Nebraska Street, Popelka Trenchard Glass has started Project Launch: a “perpetual work in progress” that’s an art incubator, classroom, performance space, gallery and a large room that’s available for in-house artisans and the community to use short term for projects, exhibits and performances. Right now, it’s home to Piranha North, where Mark Theide is doing large audio and video productions, complete with concert lighting, foggers and up to 20 cameras controlled by a custom-built computer.

“It gives a performance feel when we put it on a stream,” Theide said.

The studio has streamed performances that otherwise would have been live, such as Harmony by the Bay at Martin Park; and it’s currently doing a Jeff Miller production to benefit the Art Garage and Angels of Mercy, with national and international acts performing over three days starting Jan. 15. Post-pandemic indoor music performances may also be possible.

Another recording studio is coming across the street from Popelka Trenchard Glass. Marcus Thana, a musician from Norway who used to operate the Nistebox food truck with his wife, Charlotte, has recently received the permits needed to build a recording studio that will open onto the backyard of their house for summer concerts. He had been at the Tambourine Lounge for five years, but he said he needed more room.

All that’s happening in the Creative District proves the pandemic may have halted public performances, but it has encouraged artists to collaborate in new ways and to invest in new venues that will serve them – and their audiences – well into the future.