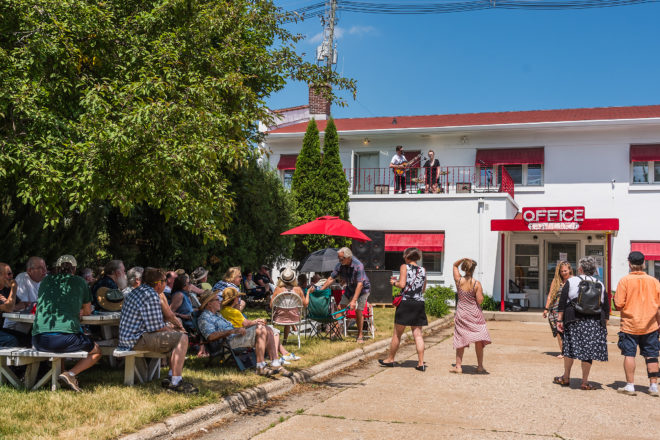 Adaptability and spontaneity has been baked into the DNA of Steel Bridge Songfest since its inception in 2007. Each event has been drastically different from the one before, which is, in fact, a large part of its appeal. The Songfest has inhabited many venues throughout the years – a yacht club, a parking lot and a theater, to name a few – and each physical transition has caused the event to adapt. This year, the Songfest has transitioned yet again – this time, to virtual space.

“Really for us, when a wrench is thrown in the works, we really embrace it because it sends us in a direction we didn’t even expect and forces us to take steps in directions we’ve never taken before,” said melaniejane, key Steel Bridge Songfest organizer.

In many ways, this year’s Songfest will be very different from those of years past. It will be held entirely online June 12-13, when artists will perform their original music using a mix of live and prerecorded videos. Participants from around the country will provide live introductions and color commentary throughout.

Although many technical elements have had to change, the Songfest’s most essential elements will remain the same: passionate artists performing awesome music. Every year the Steel Bridge Songfest brings a special blend of artists and perspectives together for a week to create and perform original music inspired by Sturgeon Bay’s historic Michigan Street Bridge.

According to a tried-and-true formula, the Songfest occurs every year during the week that includes the second Thursday in June. With so many changes already, it was important to Steel Bridge Songfest co-founder pat mAcdonald that the scheduling remain consistent.

“We want people to know and get in the habit of knowing when Steel Bridge happens,” mAcdonald said. “We’ve built a connection with that particular weekend in people’s minds.”

At the beginning of the week, artists are randomly paired through a bottle-spinning process. The bottle spinning was held this year during a videoconference, with artists calling in from their homes all over the country and mAcdonald spinning the bottle at the Tambourine Lounge in Sturgeon Bay.

After the bottle spinning, the new songwriting partnerships begin to create and perform original music inspired by Sturgeon Bay’s historic Michigan Street Bridge. In years past, all artists would stay at Sturgeon Bay’s Holiday Music Motel for the week, sharing meals and having impromptu conversations throughout the songwriting process. This year, collaborations are taking place during scheduled conference calls.

Although the level of energy that’s normally exchanged between an artist and an audience during a live show cannot be replicated virtually, there have been some unexpected benefits of virtual collaboration and performance: Artists and organizers have noticed that video recordings have the potential to give audiences a more intimate glimpse into the music and music-making process, and many artists have been more inclined to record stripped-down, personal versions of new songs and works from past Songfests.

Additionally, the experience of virtual collaboration has drawn artists closer to each other. melaniejane has been organizing biweekly check-ins with Steel Bridge participants past and present.

“It has been really nice to be able to see all these people we wouldn’t necessarily be able to see otherwise,” she said, “and it has been fun to see their homes and see where they live and meet their kids – all that. It’s kind of cool.”

The transition to virtual space has also prompted many participants to hone their technical abilities. For some, the transition comes as an unexpected opportunity to learn about producing videos and promoting original music on online platforms – skills that have become increasingly necessary for artists to master in recent years.

In addition to the shift from live to virtual, this year’s Steel Bridge Songfest has also undergone a conceptual transition that has little to do with going virtual.

To learn more, visit Steel Bridge Songfest on Facebook or at steelbridgesongfest.org.