Worth Noting:  Davidson toured the U.S. in 2008 with Holly Golightly and the Broke Offs, attracting rave reviews. 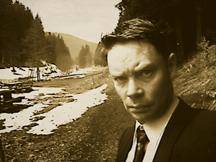 Home is:  “My suitcase, sounds corny but it’s true. I feel at home in Europe, Australia and New Zealand. Working on the States now.”

Intro to music:  “A magical musical thing, a horrible piece of shrieking plastic that drove the neighbors berserk. That and fiddler on the roof.”

Influences:  “I am always amazed at where influence shows its head. Sometimes Dusty Springfield turns up and I never even listened to her, sometimes the Beach Boys, sometimes The Beatles, Hank Williams – its all the beautiful world of music. Tom Waits blew my teenage mind with his unabashed sentimentality, then later with his dark vision, and still later with his lifestyle. He seems to manage it well. But mostly the musicians I know personally have the biggest effect.”

You’re coming a long way to play here. How did you get connected to Steel Bridge and what made you decide to come so far?  “Played support for pat mAcdonald in Switzerland and managed to keep in contact somehow. He came to see me in Madison when I toured last year, and we both thought it would be great. I love the idea of the construction zone – musicians meeting and working together under a deadline.”

Summer plans:  “I have been asked to play a show August 1st in Minneapolis, and plan on a West Coast tour with the Reverend Beat-man and the Voodoo Rhythm showcase from Switzerland July 2 – 17. Apart from that I am open to suggestions. I would love to play some shows.”