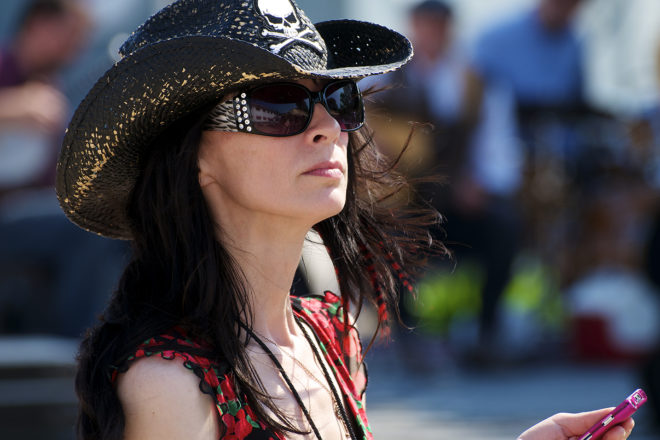 This weekend, more than 130 musicians from across the country will fill venue stages and parking lots throughout Sturgeon Bay’s historic downtown in celebration of the weeklong songwriting festival that commenced Sunday night at the Holiday Music Motel.

For the past several days, these Steel Bridge Songfest musicians have been fully immersed in the “Construction Zone” – a collaborative songwriting intensive for professional and aspiring songwriters here by invitation. Every day, these songwriters are linked up with others (their fate determined by spin-the-bottle) to write and record original songs for performance and an annual compilation album.

If you ask a newbie what it takes to meet the week’s demands, you’ll likely get a few responses: sleep, caffeine, good meals and a good songwriting team. But if you ask Steel Bridge Songfest veterans what really makes it possible to crank out song after song in the studios of the Holiday Music Motel, they will give you one answer: melaniejane.

This petite, raven-haired manager of the Holiday Music Motel has been a fixture of Steel Bridge Songfest since 2007 and a manager of the motel where the musical magic happens since 2011. Year round, she wears many hats: manager, front desk worker, housekeeper, overseer of finances and Ms. Fix-It. When the motel greets an influx of new and returning musicians for its three annual songwriting festivals – Steel Bridge, October’s Dark Songs and February’s Love on Holiday – that hat becomes an all-encompassing costume that has earned her the affectionate nicknames of “den mother” and “air traffic control” by her friend and fellow musician Ruby James.

Making the festival experience the best it can be has been melaniejane’s main motivation since she earned a life-changing invitation to Steel Bridge Songfest 2007 by festival co-creator and Holiday Music Motel co-founder pat mAcdonald. A classically trained cellist with an indie rock-Americana bent, melaniejane’s resume included a seat with the Racine Symphony Orchestra and a gig teaching at the University of Wisconsin – Milwaukee School of Music. She was a regular performer throughout Milwaukee and the U.S., sharing stages with the likes of Sam Llanas (formerly of The BoDeans) and Victor DeLorenzo of the Violent Femmes.

But when she experienced Steel Bridge Songfest in 2007, it changed everything. By fall 2008, she was living in Sturgeon Bay and giving the bulk of her energy to organizing and growing the festival, telling On Milwaukee in a 2009 interview, “it was such a life-changing experience, I have been dedicated to it ever since so that others can come and share the same experience.”

Those running the show at the time, including motel co-founder, former manager and current part owner Anna Sacks, immediately recognized melaniejane’s musical and management talents. After a revolving door of managers, she took the reins in 2011 and is credited with not only keeping the motel afloat but helping it thrive with a knack for DIY tasks and thrift shopping to honor the motel’s 1950s-era vibe.

“melaniejane does everything,” Sacks said. “Before she calls anybody to fix anything, she Googles it and sees if she can learn to do it herself. Anything, from plumbing to plastering, any kind of construction stuff…we got new TVs a couple months ago, she installed them all by herself in the rooms, hung them on the walls. Eighteen. She’s a force of nature.

Steve Hamilton, chief engineer and part owner of the Holiday Music Motel (and operator of Makin’ Sausage Music in Milwaukee), credits a confluence of rare personality traits for melaniejane’s ability to keep the chaos manageable and the motel and festivals running smoothly.

“Without her, the motel would have been closed,” Hamilton said. “We wouldn’t have been able to survive without her. She’s a really good manager, a smart girl, takes no prisoners, says it the way it is, straightforward and honest, doesn’t beat around the bush with stuff…I hesitate to think of what her to-do list looks like.”

mAcdonald echoed those sentiments, crediting melaniejane for keeping the festival alive and growing.

“She took on so much of the work of helping do all these things – the motel, the festivals, everything – she took on so much, it kind of enabled me to keep doing it otherwise I would have had to stop,” mAcdonald said. “It would’ve killed me. I would have had to stop. If I didn’t have somebody so passionate, pleasant and devoted and organized in the middle of all of this, I couldn’t have kept doing it.”

For those closest to her, it’s no secret what they hope to see more of on her to-do list: live gigs, which she has largely given up in favor of turning the spotlight on established and emerging artists who come to the Holiday.

Ruby James plans to help her along the way, adding melaniejane to a few of her summer shows with the hope of treating Door County audiences to the talented multi-instrumentalist who, for so long, has given her time and energy to the growth of the business, festivals and musicians she holds so dear.

But from now through Sunday, she’ll be keeping the beat of this songwriting collective at more than a few places.

“She will be at every venue every night, likely, and then holding down the fort at the motel during day shows on Saturday and Sunday,” Sacks said. “She’s just everywhere at once.”