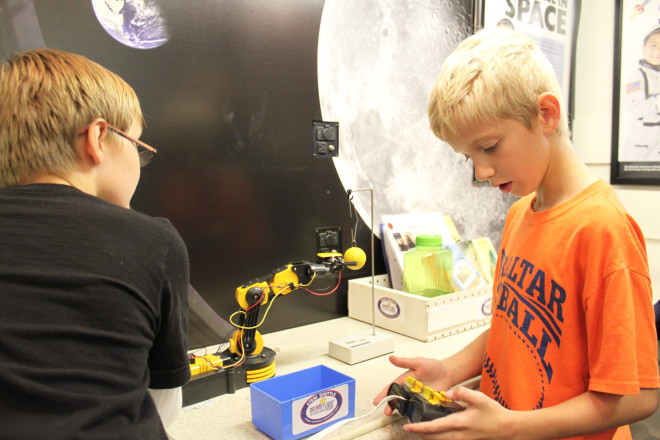 The STEM Shuttle, a mobile museum featuring hands-on experiments for fourth through eighth graders, visited Gibraltar and Southern Door schools this week with the goal of exposing kids to things they might not see in their own classrooms.

“There are four main areas that they are finding out kids are a little weak in when they’re coming into our universities,” said Sharon Ryan, shuttle coordinator, about Science, Technology, Engineering and Mathematics (STEM). “In some cases they’re starting to teach remedial classes at the university level. We need kids to be more exposed to these types of things and have a little more background coming in.”

The program accomplishes this by receiving invitations to visit schools for a day, loading a bus with instructors and hands-on experiments and parking outside the school like an in-house field trip. Based in Wausau, the shuttle primarily travels through Wisconsin, but has made trips to Illinois, Iowa and Minnesota. 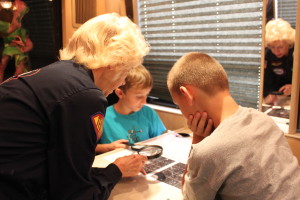 “As a teacher, I found the hands-on experience becoming more important,” said Ryan. “You study the ideas and the concepts in the classroom and then we go on to the next chapter but they need to do something with what they learn. They need to make those connections.”

Ryan feels this is especially important in rural areas where the access to resources and funding for practical experiments may be strained.

“They’re not exposed to things like this a lot in this area,” said Ryan. “Bringing something like this here kind of opens their eyes. More than most schools I’ve been to, these kids just had so many questions. The other kids, they’ve been exposed, they’ve been to museums where they had that little bit of background.”

In the end, the STEM shuttle aims to provide young kids with an insight on what they may want to pursue when they get older. It is a way for children to explore possibilities that they might not have known were available.

“Kids see this and it creates an awareness of jobs out there and to get them interested in thinking about something at that age level,” said Ryan. “We’re introducing them to many concepts and trying to get them thinking about what they want to do.”

The shuttle visited Gibraltar on Oct. 6 and Southern Door on Oct. 7. It visited Southern Door last year and has even made its way across Death’s Door to Washington Island in the past.