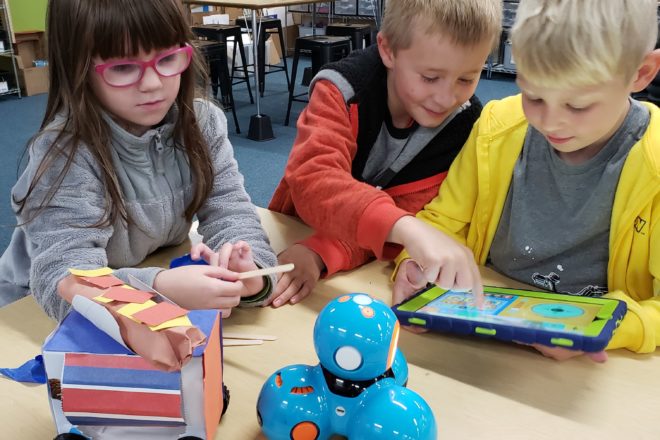 STEAM students work on their food-truck business and prototypes. Submitted.

Is there a difference?

The comment encouraged an exploration of the differences between STEM and STEAM and the possible shift in viewpoints that arrives with the addition of the “A.” But it turns out they’re really not that different.

STEM stands for “science, technology, engineering and math.” Its goal is to encourage students to work collaboratively on projects tied to real-world situations: They face a challenge and are expected to come up with a solution.

Speaking with Southern Door elementary STEAM teacher Jessica Meacham, who’s in her second year of teaching STEAM, revealed that art is an inherent, organic component of STEM. She’s never felt the need to defend why the arts are included, she said, and she wasn’t sure whether it’s really an argument at all.

While creating projects or prototypes, students apply art principles such as texture, color, mood, balance and light to their designs. Science, math and function are the main components, but the combination needs to be there, Meacham said.

That’s the most common way educators integrate the arts into their STEAM program at Southern Door, Meacham said.

“If we were to take the arts out and strictly stick to science, technology, engineering and math, it would feel strange,” she said. “I know there would be many, many kids who would want to add that element just because it happens naturally in their quest for finding a solution to the problem.”

STEM arrived first, but she believes art has been present since the beginning. She uses the terms interchangeably, but the school decided to officially call it STEAM in spring 2019 to create consistency.

“Our students and our staff really are adding all of these different artistic elements into their inquiry and design and into their research and activity, so why not acknowledge it?” Meacham said.

But just because art is included in the name, that doesn’t mean science is any less the point of it. There needs to be a combination of science, math, engineering and technology to call it STEAM, Meacham said.

She’s even heard the term “STREAM,” which stands for science, technology, reading or research, and so on. To her, that would shift more toward the literacy arts.

STEM made its way to Southern Door when high school science teacher Tony Kiszonas started incorporating it into his classes. From there, it trickled down into the middle and elementary levels.

It looks slightly different at the elementary level. STEAM is implemented into all classrooms, but students have a weekly class dedicated to it during which they work on things such as constructing a golf-course hole or creating a food-truck business. They often use technology such as iPads to help them plan and visualize their projects.

“Empathy comes into play,” Meacham said. “We want our students to buy in to what problem needs to be solved and be motivated to work as a team to find a solution that meets the need.”

When asked about her favorite part of being a STEAM teacher, Meacham said, “I love to see how each team approaches a challenge. I like to see the similarities in their outcomes, but also the differences.”