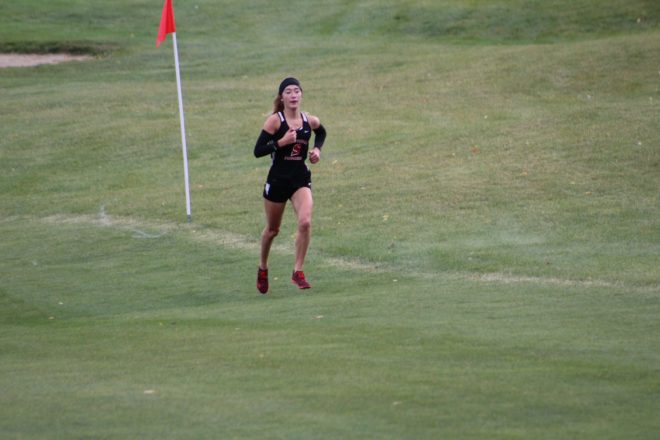 Olivia Stenzel finally got her medal.

Three times the Sevastopol senior had run her way to the state girls cross-country meet, and three times she had gone home disappointed. On Oct. 31, she wrote a new chapter in a stellar high school career.

Stenzel finished in 19:36.11, just a hair behind Jenna Anders of Fall Creek (19:36.01), which was good for seventh overall and a place on the podium. Brooklyn Luebke of Manitowoc Lutheran took first in 18:55.

Coach Annie Kapolnek praised Stenzel’s work ethic, which paid off with the best race of her career during her final performance.

“Her career speaks for itself,” Kapolnek said. “Olivia is humble and willing to put in the time and training. She’s been working hard since her freshman year, and that shines through.”

Stenzel had company at state this year because her Pioneer teammates made a surprise state run, finishing fifth overall.

Kapolnek credited her seniors with guiding the younger team members throughout the season. Dramm and Luedtke “came out of nowhere and were a pleasant surprise.”

The meet was a new challenge for the runners becauses the race was run in waves to keep athletes more physically separated. That meant they were running against the clock, not the leaders, without knowledge of how earlier waves had performed. Kapolnek said she was proud of how the girls adapted.

“They were in the third and final wave at 3:30 pm, so mentally, they went into it knowing that they had to run hard for every place. Four of the girls ran career personal bests.”

With the pandemic lingering over the season, the team’s coaches and athletes knew the rug could be pulled out from under them at any time. In Kopelnek’s eyes, that made the team’s persistence even more special.

“They’re definitely writing history for themselves,” she said. “Each runner will be able to look back at what they achieved when there was a huge chance of having no season at all and have fulfillment in that.”