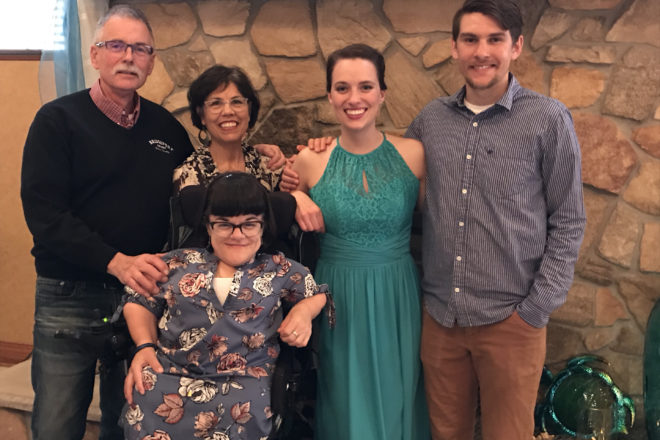 From Sturgeon Bay, to our nation’s capital, to the Windy City of Chicago — with stops in Ireland and Costa Rica, and nearer to home in Green Bay — Stephanie Birmingham seizes opportunities wherever she ventures.

What’s more, these opportunities have not been merely for personal gain or enriching experience, but instead, for the benefit of those who, she said, “live on the margins.” Through advocating for mental health and for those with disabilities, counseling, working with inmates, providing opportunities for people without homes, and serving as a bedside volunteer at a children’s hospital, Birmingham has reached a great number and great diversity of individuals.

“This component of my identity has greatly shaped and influenced the work I have done over the years,” she said. But she doesn’t allow it to limit her.

“What was great about my parents and how they raised me was that they didn’t look at my dreams as unattainable,” Birmingham said. “Instead, they let me figure out my life on my own and be who I wanted to be. They have always been the biggest supporters of my dreams and wild ambition for trying new things.”

As a young girl, it was hopes of becoming a ballerina or a doctor that captivated her mind. Birmingham reminisced with gratitude about the “many wonderful memories” that she and her younger sister, Meredith, made together.

“We got along so well,” Birmingham said. “As we’ve grown into adult women, I am appreciative of the value in our continued close relationship with one another. She is not only my sister, but also my best friend.”

Along with the positive influence of her parents and sister, Birmingham credits her maternal grandmother, Dorothy Gerl, with teaching her the importance and value of gratitude.

“Grandma showed me how to be grateful for what you have,” Birmingham said.

After graduating from Sturgeon Bay High School in 2005, she attended St. Norbert College in De Pere and majored in political science, with a minor in peace and justice. There, she co-founded an advocacy group called Friends for Wheels to advocate for those with disabilities and raise awareness about disability-related issues on campus.

During the spring semester of her sophomore year, Birmingham participated in the Washington Semester Program’s Justice Program through American University in Washington, D.C. There she met with professionals in various fields, visited the Supreme Court, Pentagon, FBI Training Academy, NRA and other organizations.

“We covered the whole political spectrum,” she said. “At the time, I had no idea how impactful the experience would be for me later on in my career.”

After graduating from St. Norbert College in 2009, Birmingham boarded a plane with professors and students for a weeklong journey to Ireland — the impetus for which she credits to her trip to Costa Rica during the summer of 2008. The Costa Rica excursion was part of a cultural-exchange program through Mobility International USA for young adults with various types of disabilities.

“We all were paired with a host family who we lived with for the two-week duration of our trip,” Birmingham said. While there, she learned about disability rights and advocacy efforts in Costa Rica.

In her first job in Rockville, Maryland, she worked to improve disability employment policy.

Birmingham later headed back to Wisconsin, ending up in Green Bay. For a year and a half, she lived in the faith-based Norbertine Volunteer Community. During that time, she was a full-time volunteer intern in the chaplain’s office of the Brown County Jail, where she worked one to one with male and female inmates and juveniles.

In 2012, Birmingham moved to Chicago to earn her master of arts degree in pastoral counseling at Loyola University Chicago. As a graduate student, she continued to immerse herself in volunteer work and developed relationships with many of the individuals who were living on the streets.

Birmingham completed her master’s degree in 2015 and began providing counseling through her own practice, Birmingham Counseling; and she started working at Options for Independent Living, where she’s the advocacy coordinator.

“My focus at Options has been advocacy work related to the topics of homelessness and housing, and mental health along with disabilities,” she said.

One constant in Birmingham’s life has been her desire to be with people.

“I am much more of someone who wants to be with people and ‘on the streets,’ so to speak,” she said. “I think that’s where we see the complexity of humanity.”