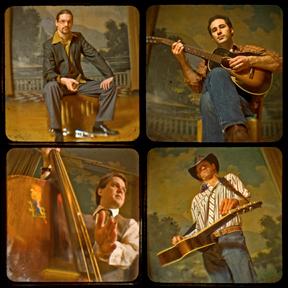 Steppin’ In It, one of America’s most prestigious American roots bands, will take the stage at Egg Harbor’s Peg Egan Performing Art Center on Sunday, August 2 at 7 pm as part of the Sunset Concert Series.

With a rigorous touring schedule, an ample supply of vintage instruments and a sound that brings listeners back to the days of old-time radio, these Michigan roots artists have performed on some of the most prestigious stages in the nation this summer.

While playing over 200 shows a year, the band took a break last fall to work on their most recent CD release, Hidden in the Lowlands. Released in July, Lowlands captures the energy of their fierce touring schedule and the diversity of old-time American music. These young men hammer out their own brand of roots music combining old-time country, swing and blues, achieving the seemingly impossible task of making the most of traditional sounds contemporary. The album features four covers spanning the history of American roots music along with nine originals showcasing the strong songwriting talents of singer/songwriter Josh Davis, whose vocals paint a picture of rural and urban Michigan.