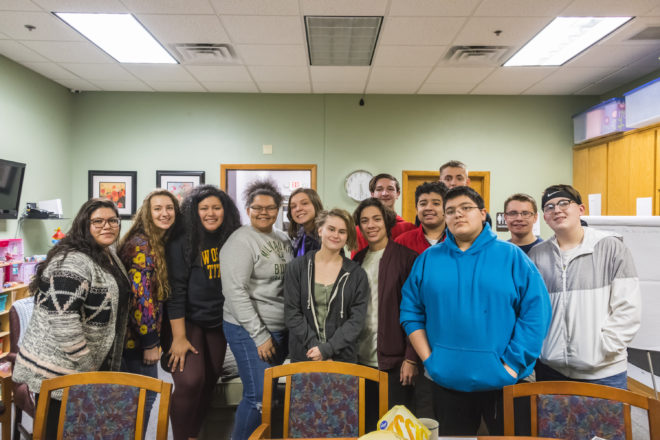 Local high school students gather to brainstorm ways to combat domestic violence in their generation. The Youth Advisor at HELP, Karla Romero (left), lets the students take charge of their own meetings. Photo by Len Villano.

When a church friend mentioned to Ava Carmody in 2018 that she might enjoy volunteering at HELP of Door County, she jumped in with both feet.

The group came about after Carmody, Alysha Nelson, Emilio Gonzales and Alejandro Gonzales attended the February 2019 Teen Summit. All of the students realized that something needed to be done, and they wanted to take their newfound knowledge back to their community.

After school on Mondays, 15 to 20 other teenagers from Sturgeon Bay and Southern Door high schools meet at HELP for dinner and peer-led programs about how to take leadership roles in recognizing and preventing teen dating violence, bullying, racism and sexism. As the senior leader, Carmody takes on a bit more responsibility and will pass her knowledge to the junior leader, who will take her spot next year.

“We deal with topics that are very relevant to us,” Carmody said, “discussing things we’ve seen or heard. We know HELP is a safe place to talk with our peers about things we might not feel free to say at school. And, we know that everything that’s said here will not leave the room. Confidentiality is important.”

Forty years ago, there were no emergency numbers for police or fire assistance, no agencies to call for help to find housing or pay for utilities. But there was HELPline, established in 1979 to aid victims of domestic violence.

Since then, HELP of Door County’s services have grown. Resources for adults include immediate safety for victims of abuse; assistance with personal legal, advocacy and support services; crisis counseling; and educational groups. There is also help specifically for older adults who are experiencing abuse, as well as a prevention program.

Because witnessing domestic abuse can cause emotional, behavioral and cognitive problems for children and youth, HELP provides group and individual support with safety planning. Teen services include dating-violence awareness and prevention and education about healthy relationships.

The four members of the FYRE leadership council — one from each high school class — have all, voluntarily, taken the 40-hour professional domestic violence advocate training course. They do not serve as advocates for HELP clients, but they do use what they have learned to serve as “listening ears” for fellow students and as ambassadors at school and in the community, letting teens know that help is available for young people who are experiencing any kind of unacceptable behavior.

Recently, the council members have focused their group discussions on models created by the Domestic Abuse Intervention Programs organization in Duluth, Minnesota, talking about power and control in physical and sexual violence, and the circles of nonviolence equality.

Steve Vickman, HELP’s executive director until he retired at the end of 2019, said that Carmody and the three other members of the FYRE leadership council “understand all the aspects of domestic violence. Their training was a big investment of our time, but they’re our ambassadors in the community.”

Already these teens have made a large impact.

“We went as observers,” Carmody said, “but we found that others in the crowd of more than 800 were interested in what we were doing in Door County.”

FYRE has since become known around the state. On Feb. 24, 2020, about 20 members attended the Teen Summit at the Chula Vista Resort. They were invited to lead breakout discussions during which they discussed teen dating and violence. They also conducted a roundtable session on toxic masculinity: the assumption among many males, especially white men, that they are superior to women, that they are smarter, that what they have to say is more important and that women should be subservient to them.

Interestingly, FYRE has more male than female members. “That wasn’t what I expected,” Vickman said.

“I was surprised, but tremendously pleased.”

For several years, Vickman has attended the Fox Valley Voices of Men breakfast and call-to-action program that’s focused on the prevention of sexual assault, rape and domestic violence. Although the event is primarily directed toward men and male youth, it always stresses that women’s voices are equally important.

For the first time, eight FYRE members, both young men and women — accompanied by HELP youth advocate Karla Romero — attended the Nov. 21 Voices of Men event, where Janine Latus, a nationally known speaker and author, spoke of the abuse she suffered in her outwardly perfect marriage and how her younger sister was abused and murdered by her boyfriend after leaving a note titled, “If I am missing or dead.”

“Kids want to do something,” Carmody said. “We want to get our peers involved and help them learn what we are learning about sexual violence, dating violence, racism, sexism and bullying. We make daily announcements at school. We post posters, and we march in parades to support groups that are often victimized. Although transportation is a problem, we hope to get students from Sevastopol and Gibraltar involved in FYRE. We want to end abuse and violence with our generation.”

“The number of calls on our hotline goes up every year,” Vickman said. “And the number of clients HELP is dealing with has doubled during the past three years. Since 2016, our number has gone from 149 to 311. I’m sure #MeToo has had an impact. Eighty percent of our clients are women.

“Research tells us that it takes seven or eight instances of abuse before the abused person will leave the situation. Our youngest client in 2019 was a year old; the oldest was 85.

“People who come to us know that our first priority is to make sure they are safe. We do not provide counseling, but we listen without judgment, support without blaming and empower victims through advocacy and information. We always believe what clients tell us. We provide options. We empower them, but we never tell them what they should do. Our services are always confidential and, due to the generosity of our community, all victim services are free.”

HELP has initiated many programs during the past 40 years, including Alternatives to Violence, an educational program for male batterers; a Violence-Free Relationships for Teens curriculum; an Alcohol and Other Drug Abuse Prevention program; a Women Ending Abuse and Violence program; and the Walk in Her Shoes annual event.

Through their programming, FYRE members hope to instill a new, positive sense of normal in younger generations — starting with themselves.

“Looking back on it, I was really ignorant on big issues that I thought I knew about,” said Jake Bretl, the youngest FYRE member.

Despite being told by some adults that teens are not capable of talking about these kinds of topics, FYRE wants to give younger generations the tools to address these problems once they’re out on their own.

“Sometimes adults don’t really give youth the chance to speak their minds,” Romero said. “If I were their age, I would have wanted a group like this. So seeing this group flourish to bigger and bigger things,

I think it’s huge … These kids are our future, and we are not giving them the opportunity to verbalize their concerns.”

Although these students face many obstacles in society, they have the passion — and FYRE — to make an important difference in the lives of those around them.

A powerful program that began with HELP of Door County and is now shared with all local police and sheriff’s departments is LAP: the Lethality Assessment Program. It consists of 11 questions that are asked whenever a law-enforcement officer or domestic-violence advocate talks with someone who is in a potentially abusive situation.

The first four questions are: Have you ever been strangled? Have you been threatened with a weapon? Has the abuser threatened to kill you? Has the abuser threatened to kill a child? If any one of these is answered yes, the person in danger is removed, and HELP is called immediately. If three of the remaining seven questions are answered yes, it’s a sign of high danger, and immediate action is taken.

National research indicates that if an abused person is put in touch with an advocate immediately, the chance of a situation becoming deadly decreases by 64 percent.

Advocates meet regularly with clients at HELP’s office, 219 Green Bay Road in Sturgeon Bay; and at Shepherd of the Bay Lutheran Church, 11832 Hwy 42 in Ellison Bay. They can also meet at other locations that are convenient for clients.