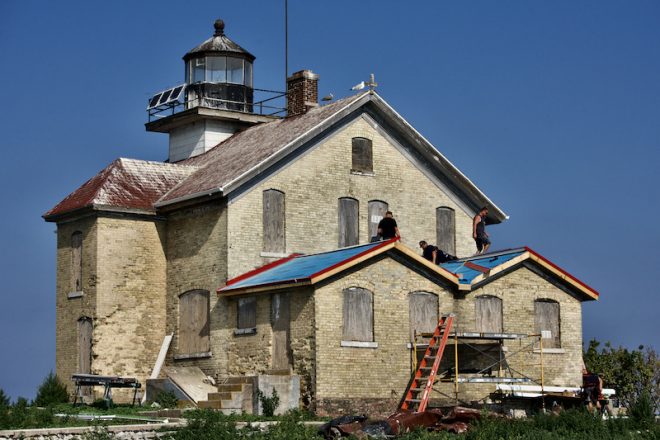 story and photos by Tim Sweet

Some people are destined to make a positive difference during their lifetime, and Paul Schumacher is one of those special individuals. Schumacher, 70, serves as the volunteer leader for the Friends of Plum and Pilot Islands’ (FOPPI) historic preservation committee. A retired engineer, he devotes seemingly countless hours to writing out scopes of work for the buildings and waterside structures on Plum and Pilot Islands in the Death’s Door region of northern Door County.

Then, with the help of a dedicated team of passionate preservationists, Schumacher does much of the legwork to track down contractors, materials and transportation to put the plans into action.

I caught up with him on Aug. 26 when he was on his way to Pilot Island with Frank Gercz of the U.S. Fish and Wildlife Service (USFWS) to check progress on the restoration work being done on the 1858 lighthouse there.

Moore Quality Exteriors in Sheboygan, Wisconsin, had a six-person crew on the island fabricating gutters and downspouts to minimize the water damage that’s being done to the building’s Cream City bricks. The workers were also installing a new metal roof over the summer kitchen on the east side of the lighthouse. FOPPI is funding the work.

“We really appreciate the opportunity to work on a project like this,” said Chad Moore, the company’s president. He’s a craftsperson whose skill is evident in the quality results that he and his team produce.

Tiny Pilot Island, part of the Green Bay National Wildlife Refuge, is currently a bird sanctuary that the USFWS manages. It is not open to the public to visit, and there is only a short period after the cormorants, gulls and pelicans finish nesting and their young have fledged when the USFWS will allow contractors access to the island.

In addition, the lighthouse and neighboring fog-signal building have been left to fend for themselves since the last of the keepers left more than 60 years ago.

During that time, the fog-signal building has collapsed. The lighthouse received a new roof in 2009, but the interior had already suffered major water damage prior to the installation of the asphalt shingles over the main part of the dwelling.

“It’s a shame to see lighthouses neglected,” Schumacher said. “These are a part of our heritage. If we don’t work to save them, they won’t be around for our children to see.”

Schumacher plans to begin creating a scope of work for the damaged bricks on the exterior of the Pilot Island lighthouse in hopes that next August, workers will be able to stop the walls from crumbling further.

Keep an eye out for additional preservation work on Plum Island in 2022. Read more about FOPPI at plumandpilot.org and the Green Bay National Wildlife Refuge at fws.gov/refuge/green_bay.