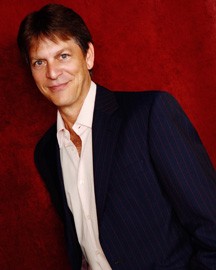 Noted jazz/pop singer and television and radio host Steve March Tormé will be singing his “Tormé Sings Tormé” program at the Door Community Auditorium (DCA) in Fish Creek on Dec. 30 at 7 pm. Accompanied by his jazz trio, the show will include Tormé’s version of his father’s hit “The Christmas Song,” the most played Christmas song in the history of broadcast radio.

Steve March Tormé is the son of legendary jazz singer Mel Tormé. He grew up in Beverly Hills, where his childhood friends included Liza Minnelli, Carrie Fisher, Chastity Bono, and Dean Martin, Jr. In fact, his first composition was sung by Desi Arnaz, Jr. on an episode of the Here’s Lucy television show. Tormé would later go on to produce and to perform on the Tropical Nights album with Liza Minnelli and to perform on an album with Chastity Bono’s band.

Tormé reached prominence in the early ‘80s, first as the co-host and vocalist for the successful television revival of Name That Tune, and as a member of the jazz vocal group Full Swing. In the last ten years, he has continued to record for a variety of independent labels, releasing the award-winning Tormé Sings Tormé, in addition to pursuing an active touring career, including performances with his jazz trio, big band and symphony orchestras. To learn more about Tormé visit http://www.stevemarchtorme.com.