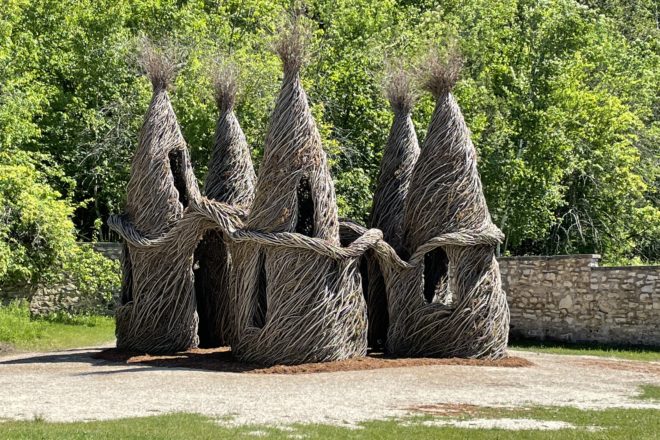 If you’ve driven past Horseshoe Bay Farms in Egg Harbor lately, you may have noticed a new group of sculptures towering 25 feet in the air near the back of the lot. The sculptures’ presence is large enough to be seen from the road, but set back far enough that people must get out of their cars and walk into the property to get a good photo.

“We want folks to enter the property, be greeted by a volunteer and then go and experience it,” said Drew Richmond, executive director.

If you’ve caught a glimpse of the sculptures in process, you understand why people want to get a closer look. They’re made entirely of willow branches and saplings.

Tentatively titled “Happy Go Lucky,” this is the creation of world-renowned sculptor Patrick Dougherty, his son Sam, and about 30 volunteers who helped to collect the materials and then helped to weave them into the shape that the sculptor had designed.

Dougherty, who was commissioned by Horseshoe Bay Farms, creates 10 of these sculpture structures a year, working for three weeks on each, whatever the weather. Four volunteers on four-hour shifts in the mornings and afternoons assist him.

“As we work on it, we get the feel. Patrick can redirect us if we aren’t getting the flow,” said Rebecca Carlton, a sculptor at Juddville Clay. Along with her husband, Tony Staroska, she volunteered to help with the project.

Carlton has loved Dougherty’s work for many years, so when she learned he was coming to Door County, she signed up to work over 10 days.

“One can see him looking over the piece and moving sticks into just the right place in order to capture the essence of his intention,” she said.

The building process begins by boring holes two feet deep in the ground every three feet around the footprint of the structure, then inserting strong, hardwood poles to provide the structural support. Under guidance from Dougherty, the crews then weave the willow branches they’ve harvested from local properties whose owners have offered access to the volunteers.

“We do 14 days of intense work to convince the sponsors that something is really happening,” Dougherty said. “We have to prove each time that things will work out.”

Then the group takes a weekend off and finishes the following week.

Dougherty came to Door County after a project in Kansas and will be heading to Montana for his next one – and he’s booked at least two years out.

He has worked with stick sculptures for 40 years as a second-act career after he grew tired of working in health administration. During that time, he said his style has matured and become looser, more expressive and more self-confident. His works typically consist of several structures with walkways and windows so that visitors never feel trapped, and often there’s a center room for reading, contemplation or just visiting.

Horseshoe Bay Farms is more isolated than many of Dougherty’s project sites, which are often on college campuses, in city parks or in sculpture gardens where he’s able to interact with passersby who stop to watch, inquire and comment. On college campuses, students like to sit inside and read, and in park settings, kids love to play hide-and-seek throughout the spaces.

“Kids know all about sticks,” Dougherty said. “Everyone has a childhood experience of playing with sticks, and it doesn’t take much to tap back into it.”

Before beginning a project, he sketches out a view of the work he wants to make and then ad-libs a bit.

“I know the outline, and then we are opportunistic and capitalize on what we see. We try to maximize the view so it turns out in an interesting way,” he said, pointing to a part of the Horseshoe Bay work. “This hallway was so vertical, but now it flows and it feels like it is moving.”

That’s one of the charms of willow: It bends easily. Leaves stay on some of the small branches and then eventually dry and fall off. Dougherty thinks of the branches as lines that he draws with. On the penultimate day, for instance, he was weaving a band through the interior to echo the band woven around the outside.

“Lines look like they are moving a bit,” he said. “The final phase is cosmetic, using small sticks to hide a flaw, or larger sticks to add rigidity and provide support for someone to lean against. The structures are strong, and their cone shape means they shed snow in the winter.”

But they don’t last forever, and their ephemeral nature is part of both the plan and the appeal. The artwork is expected to last two, maybe three years before it begins to fall apart, intensifying people’s desire to see it while they can.

You can see it for yourself at Horseshoe Bay Farms, 7212 Horseshoe Bay Road in Egg Harbor, which is open Tuesday-Saturday, 10 am – 3 pm. Learn more about this memorable commissioned piece at horseshoebayfarms.org/stickwork.