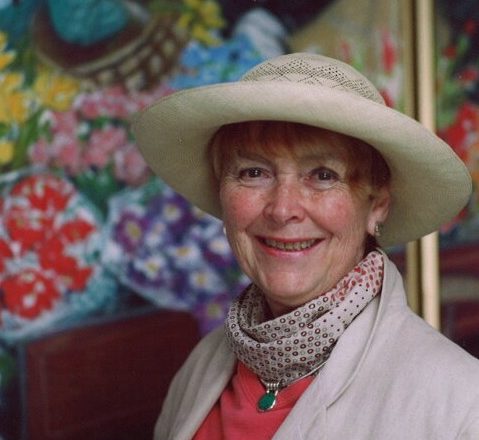 Artist, supporter of the arts, teacher, author. A woman so strong in family, friends and faith. An inspiration to those who knew her, the heart and soul of local artists – all of these accomplishments, qualities and personalities were bundled together in Frances “Franne” Dickinson, née Harrison, 94, formerly of Ephraim, who died Oct. 7.

Those who knew her well knew her family, too, and saw the love that existed between her and her late husband, Duane; their children, Jeff, Jane and Kent; grandchildren, Jennifer, Alix and Erik; and great-granddaughter, Elizabeth, whom Catherine Davidson, owner of an art advisory company, described as the “spitting image of Franne.”

Jennifer Berns, a longtime caregiver and personal assistant for Duane and Franne, said, “I watched the beautiful love affair between them every day. They were so gentle and wonderful with each other.”

And everyone, of course, remembers Dickinson the artist.

“One day she was showing me her artwork. I looked at what she had done and was just awed by [it]. This woman is an artist, really something special. I’ll never forget that moment,” said eminent portraitist Emmett Johns, her first formal teacher. “Right off the bat, I saw that she was a natural artist. The only things she learned from me were watching my demos and listening to the things I said in class. She had the makings of an artist, and she went after it with all her might. She was an inspiration for me, too.”

Dickinson later taught at Peninsula School of Art and was an inspiration to many.

“Initially, I think of Franne as a wonderful artist, but she was also relentless in supporting the arts and getting out to exhibits,” said Cheryl Stidwell Parker, one of Dickinson’s many artist friends. “I remember one time she called me during a snowstorm to drive her to an art show. And she was a wonderful influence on and supporter of other artists – especially women who had just come here.”

Others echoed that thought.

“She was the heart and soul of women artists in Door County,” said Margaret Lockwood. “When I first opened my gallery in 1994, I didn’t know anybody at all. I entered a show at the Miller and got the Juror’s Choice Award from Emmett Johns, who was asking people, ‘Who is she?’ Sometime later, I met Franne at another event, and she said, ‘Oh, you’re Margaret Lockwood!,’ and we’ve been excellent friends ever since.”

Artist and musician Jeanne Kuhns had a similar experience.

“Franne was one of my first contacts in the art community,” she said. “I had a painting at the Hardy, and I was kind of lost, didn’t know anyone. Franne walked up to me, dressed to the nines, looking like she’d just stepped out of Vogue, and said, ‘I love your painting!’ And I said, ‘Thank you, and who are you?’ She said, ‘Franne Dickinson,’ and I thought, ‘Oh, I’ve heard that name.’”

“She just had that flair,” Lockwood said, “even when she was at Scandia. Whenever you dropped by, she was always beautifully dressed, with her red hair and jewelry. And she never looked tired.”

There are fond tales about the Navajo coat she wore every winter, the garments she found and declared to be “marvelous” in kooky little shops no one else her age would even consider entering, and the beautiful scarf that longtime friend Kevin Free brought her from St. Lucia. If Dickinson wasn’t wearing it, it served as a wall hanging outside her door.

“She was more than an artist; she was an institution,” Free observed. And so much of that institution was her eternally positive spirit, her joie de vivre.

“She was just so positive and effervescent,” Kuhns said. “Her face was like the flowers she painted. That color and spirit showed there.”

“Every little thing was always ‘the most’ for Franne,” said Joan Fitzpatrick, a longtime Ephraim neighbor and friend. “It was the most wonderful book she’d ever read, the most fantastic conversation, the best meal she’d ever eaten.”

Free agreed. “Nothing bored her,” he said. “She was interested in everybody and everything.”

Fitzpatrick recalled Dickinson’s Friday-afternoon teas, which began at her Ephraim home and continued after she moved to Scandia Village in Sister Bay.

“She was, of course, the perfect hostess, with refreshments by Jennifer Berns,” Fitzpatrick said. “The number of guests varied, and at Scandia, Franne would invite in anyone she saw passing her door, and we’d drag in extra chairs from the hall. The conversations ranged from frivolous to really deep. It was a pretty close little band of women.”

“When I first met Franne,” Kuhns said, “she invited me to stop by her house for lunch sometime. So, one day I did, and they just put another plate on the table. Whoever she was talking to, she made you feel like you were the most important thing in that moment.”

“She was a magnet for joy and my ‘joy teacher,’” Fitzpatrick said. “She knew all kinds of people, and there was always a crowd around her, but you never felt you were just part of the crowd. It was a special gift she had.”

And it was completely spontaneous. In her 2014 book, Stay at the Party Long: At Play in the ARTS, Dickinson wrote, “One of my proudest moments as an artist was when a French woman with a limited grasp of English said, ‘Your paintings are so glad!’ Not until then did I know why I painted.”

“My friendship with Franne began the day Emmett Johns was painting my portrait, and he stopped for a moment, picked up the phone and called Franne,” Davidson said. “Emmett said, ‘There’s someone here I need you to meet.’ So, I walked across Toe Path to her home, and this charming woman opened the door. Four hours later, over tea, we realized we had so much in common. I loved her art, but I particularly loved her creative, loving spirit. Talk about someone who was just filled with unconditional love. That, to me, was Franne.”

Mynn Lanphier, another artist friend, recalled that Dickinson was part of a group called the Liberal Ladies of Door County, which met once a month to discuss politics.

“We’d bring articles and talk about them,” Lanphier said, “but Franne always wanted to do something. Several years ago, when she was affected by a newspaper photo of desperate women in Darfur, she painted them and sold prints to raise money to send.”

Free accompanied Dickinson to the Milwaukee Art Museum for a book signing after the 2014 publication of her book.

“It was really quite perfect and unique,” he said, “because she was set up among beautiful displays of flowers and designer dresses, colors so in tune with her work. Franne was so humble. She was more interested in marveling over those displays than in signing books for the enormous number of people who had turned out to see her.”

Dickinson loved to talk – to anyone, about anything. Lockwood told a story about her early days here, when she had a studio in the old Juddville School.

“Jeanne [Kuhns] asked if she could paint there, too, and I said, ‘Sure, but no talking. It has to be quiet.’ Then Franne came by and said she needed a space for a while to work on a large project, and I said, ‘Yes, just one rule: No talking.’ And, of course,” Lockwood said with a laugh, “she talked all day long.”

One thing Dickinson did not love was cooking. In dedicating her book to her mother, she said, “Momma schooled me well in a ‘play ethic’ – certainly not a ‘work ethic.’ She lamented that later, commenting with a laugh, ‘Frances never walked through the kitchen.’”

Yet, she entertained beautifully. Fitzpatrick recalled that there was always a delightful spread of hors d’oeuvres that Dickinson claimed to have picked up at Piggly Wiggly.

“Things none of the rest of us ever noticed there,” Fitzpatrick said, laughing.

“I loved to cook,” Davidson said, “so whenever I was at Franne and Duane’s house, I was in charge of meals, which Duane loved.”

Along with her belief that life was meant for fun, Dickinson was deeply spiritual.

“I described to her some of my ideas about a book I was reading,” Johns said. “I drew a little diagram of it. Then Franne took the pencil, drew a circle around it and said, ‘That’s the sustaining love of God.’ That was a turning point for me, so then we not only had art to discuss, but spirituality.”

“We often shared books like Letters of the Scattered Brotherhood,” she said, “reading pages or phrases to each other and talking about what our beliefs were.”

“We were meant to be together, and we both knew it,” Berns said. “She loved the Lord, and I loved the Lord, and we capitalized on our mutual faith. We sang and prayed together every single day and started each morning with the 118th Psalm, ‘This is the day the Lord has made; we will rejoice and be glad in it.’”

The Dickinsons had been married for 65 years when Duane died in July 2016 at their home in Ephraim. Moving to Scandia Village a few months later was very hard for Dickinson, but her faith and positive nature carried her through.

“She adjusted well,” Parker said, “because that’s what she did.”

“COVID was especially terrible for her,” Free recalled, “not because she was ill, but because she was the ultimate people person, totally isolated. We talked and talked and talked, and she got over it. We called her apartment her ‘wee house’ and turned her kitchen into an art studio.” Johns noted, “She was stranded in that small space all alone during COVID, but she kept painting.”

When the Miller Art Museum announced an exhibit of Dickinson’s paintings just a few months before her death, people assumed it would be a retrospective – but no. It was recent work. Assuming she wasn’t able to attend, Johns called to congratulate her.

And there she was, in her wheelchair.

Toward the end of September, she began to fade, and close friends were told they should visit soon. “We streamed to the cozy, little nest she’d created,” Fitzpatrick said. “We thought she’d be gone by the weekend, but it was just like the title of her book, Stay at the Party Long. She wasn’t ready to leave the party, and by force of will, she lived two more weeks.”

Lanphier, one of those who visited during that time, said Dickinson greeted the group with, “This is marvelous! You’ve all come to say goodbye, and it’s so wonderful to see all of you.” Her caregiver recalled that when Dickinson was preparing for bed that night, she said, “This was the best day of my life!”

“She was not sad,” Berns said. “Her body was giving up, but she was able minded and very ready to go to heaven. The last two days, 20 people she loved so much were with her; great-granddaughter Elizabeth sang and danced for her; and they even painted a picture and signed it together. It was a beautiful transition.”