Fifty years ago, the late Earl “The Pearl” Willems decided that folks in Sister Bay needed a winter attraction, so he spent $75,000 converting a dance hall into a bowling alley. 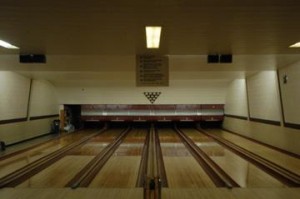 Four of the six lanes at the Sister Bay Bowl are still the original ones that Earl Willems installed 50 years ago.

“Everybody thought he was nuts!” recalls his son-in-law, Dick Daubner. 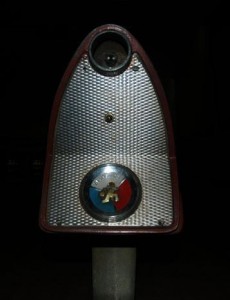 The battered ball returns at the Bowl still sport the old Brunswick logos.

Everybody changed their minds when the lanes filled up with bowling leagues in 1959. Five nights a week the Sister Bay Bowl filled six lanes with men’s and women’s leagues, some nights running two shifts. 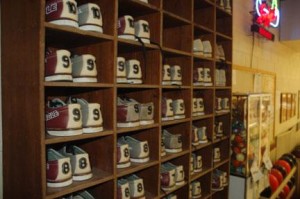 Earl didn’t have automatic pin-setting machines that first year. Instead, local boys were hired to manually load and drop the pins by pulling a string. Each boy was responsible for two lanes – and the care of his own shins. 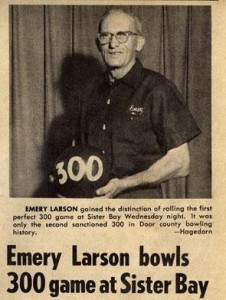 “You had a space where you could swing your feet,” Dick remembers. “You had to keep an eye on the lanes, and if both guys were throwing at about the same time, you had to jump up, otherwise the pins would slam into your shins.” Dick instinctively rubbed his shins at the memory as he talked. “Boy did that hurt. And the heat! Oh was it hot back there.”

For the third year, Earl installed automatic pinsetters, much to the relief of Sister Bay’s young male population. Half a century later, those machines (which Earl bought used) are still setting ‘em up for local rollers to knock back down. Lanes 1 – 4 remain the original lanes, while 5 and 6 have been replaced once.

By the mid-1960s, bowling was entrenched in Northern Door, going strong through the 1970s, but things began to change in the 1980s. 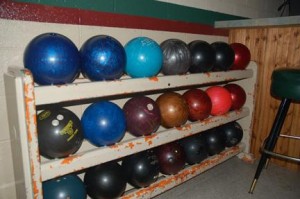 “When the drinking age went from 18 to 21, things changed a lot,” Dick says. Softball leagues dwindled and disappeared, and bowling tailed off. Three years worth of young men and women couldn’t hang out in the bars anymore.

But it wasn’t just the drinking age. Tourism was booming, and the locals were getting busier. After a long summer of work, fewer people would commit to bowling leagues when September arrived.

At the same time, Gibraltar School was consolidating the old village schools and adding activities. Girls sports, youth feeder programs, and new extra-curriculars were born, and suddenly parents had a lot more games to attend and practices to ferry kids to. There was a lot less room in the schedule for a night or two each week in the bowling alley.

Today the bowling season is 25 weeks long, down from 33, and it doesn’t start until after Fall Fest. Sanctioned league play is down to five women’s teams on Tuesdays, and one shift of men on Thursday nights.

Though the leagues aren’t as full as they once were, Sharon says the lanes still serve a nostalgic purpose for thousands of visitors.

“They come in and decide to roll a game before dinner, or maybe after,” she says. “Or they take their kids out. We probably have more open bowling than most bowling centers.”

After 50 years, the old lanes are cracked, chipped, and stubborn, but as long as they can keep them functioning, Sister Bay can thank “Earl the Pearl” for giving them something to do.

When Emery Larson bowled the first perfect 300 game at the Sister Bay Bowl on Dec. 15, 1966, it was front-page news in the Door County Advocate. Larson “employs a sharp breaking hook in his game,” the story said.

Larsen had an inside advantage – he was the keeper of the lanes. As Earl Willems right-hand man he maintained the alley for 16 years, working after league play ever night. He actually learned how to take care of the lanes from his whip-smart son, John, whom Earl sent to the Brunswick Mechanics School in 1960. John was one of the Bowl’s original pinsetters, and he came back and showed his dad how they worked.

In 50 years, the lanes at the Sister Bay Bowl have been the responsibility of just three men, Emery Larson, Dick Daubner, and now Mike Daubner. Emery taught Dick, and Dick taught his son, Mike.

In a testament to the early popularity of bowling, Emery’s death in 1975 also merited front-page headlines in the Advocate. “300 bowler dead at 67,” read the headline. Emery’s claim to fame was sealed.

His ghost is still purported to frequent the lanes he cared for.

Modern equipment has made a huge difference in bowling scores. A good ball once cost about $30, but Lief Mickelson says some bowlers will spend $300 – $400 on a ball today. Many bowlers have multiple balls for different situations, such as a spare ball for picking up a hanging 10-pin.

Equipment makes it difficult to compare bowlers today to those 30 years ago, so Dick and Mike Daubner say it’s difficult to make a definitive list of the best regular bowlers to grace the lanes. A 192 average would have led the league two decades ago, Dick says, but today that score wouldn’t even put you in the top 10. But an un-scientific poll of random bar patrons drinking cocktails and beer prodded by a reporter who likes lists produced the following names, in no particular order: