For the last five years, Gibraltar Middle School Social Studies teacher Lauren Mittermann has been the ringleader of an underground movement. Known as “Mitter’s Knitters,” the informal club now consists of about 40 seventh and eighth grade students who usually get together during lunch or after school to chat and piece together hats, socks, scarves, or blankets.

“But this year I had one student ask me if he could knit during a class,” said Mittermann. “And I didn’t know what to say about that, so I started doing some more research.” 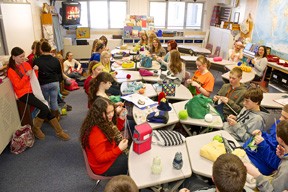 Some poking around on the internet led Mittermann to a number of articles that suggested knitting in class helped a lot of students, especially the easily distracted ones, and gave them better focus during lectures or activities. The repetitive motions and sense of purpose keep students “in the zone,” allowing them to truly hear their teacher and actively participate in class.

“So I made a deal with this one student and said I’d try it, but grades have to stay the same or go up,” said Mittermann. “And they went up. I would say he was a struggling C student and now he’s a B- or A student.”

And just like that, “Mitter’s Knitters” came into the light. Mittermann now allows all of her knitters to knit during class, provided they prove they’re paying attention and their grades don’t falter, and a number of Gibraltar’s other teachers are also letting kids make scarves while they listen to lectures.

“I definitely like knitting in class because my hands are fidgety,” said student Bailey Stark during a lunchtime “Mitter’s Knitters” meeting. “For me, it’s a stress reliever.”

“It’s just really relaxing,” said Seth Johnson, who is one of a number of eighth grade boys who took up knitting after their classmate, Bo Johnson, passed away late last year.

He said the knitting gave the group something else to focus on, and they’ve knitted some orange scarves and hats in memory of Bo. “And apparently it’s good for your brain or something, too,” he finishes.

But for the students, knitting is far more than just a way to sit still and get good grades. A lot of them use it as a form of artistic expression, carefully choosing the colors of their yarn and the projects they’re going to take on. It’s also a way to challenge themselves, as they look online for new patterns or YouTube videos explaining how to undertake complex projects.

“I was kinda nervous, because I was thinking ‘What are parents going to think about this?’ Because suddenly everyone was going home asking their parents to take them to ShopKo or Jo-Ann Fabric to buy yarn,” said Mittermann. “But the parents were thrilled. They’ll check [their kids’] rooms expecting them to be playing video games, and they’re knitting.”

While putting the finishing touches on his first knitted hat, eighth grader Nate Surges said his basketball team has taken up knitting on the way to away games, a habit that’s apparently not universally beloved.

“Our coach hated it so much. He wanted us to put our headphones on and listen to rap music, but we just knitted,” said Surges.

Knitting, it seems, is cool again, and Mittermann is hopeful that the group will continue to grow through word of mouth as more students catch the bug.

“In a middle school classroom, all this stuff is going on, and it’s normal because we’re human beings. But how do you give somebody a constructive outlet for that?” said Mittermann. “And not for everybody, but for some kids, knitting has been the thing that does that for them.”