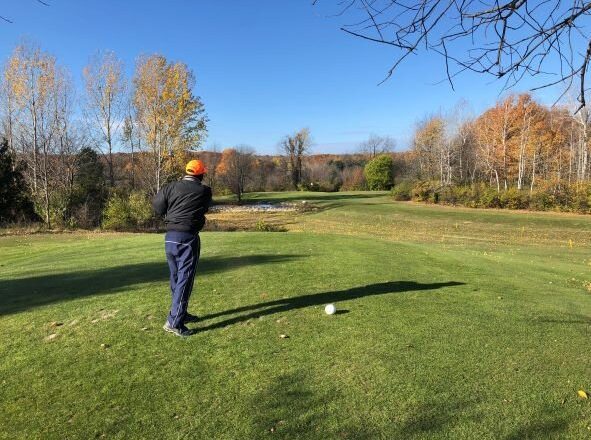 Popular whenever not covered in snow, Stonehedge has filled a niche for Door County golfers since 1993. Owner Jon Oswald listed the course for sale this month and immediately received an offer he liked. Photo by Craig Sterrett.

Jon Oswald listed his property on Nov. 9 and had a suitable offer for Stonehedge Golf Course by Nov. 10.

Oswald, a former cable-television project contractor, bought the Egg Harbor course and restaurant/bar in 2009. He said he “couldn’t ask for a better job” than operating his business and practicing golf shots in the evenings while working on irrigation, and that the year-round course stayed busy throughout 2020 and 2021.

However, some personal tragedies made him decide to sell. Oswald’s wife, Laurie, died during the summer of 2020, and his best friend – who was also his equipment mechanic and computer expert – died earlier this month. Oswald had closed the restaurant and bar in 2020 for a variety of reasons, including the onset of the COVID-19 pandemic.

The potential buyer has strong Door County ties, wants to keep the course running and will potentially reopen the restaurant. Oswald said he disregarded a proposal this summer from a developer who was interested in using the 41-acre site east of Egg Harbor as a solar farm.

“I threw that right into the garbage,” he said.

Designed by John Cole and opened in 1993 by Cole and his sons, Stonehedge fills a niche in northern Door County as a family-friendly, par-31 executive course. At 2,100 yards, experienced golfers have no problem reaching greens in regulation, but tiny, undulating putting surfaces make approach shots and chips challenging for both beginners and low-handicappers.

Oswald said his plan is to live closer to his grandchildren in the Appleton area.