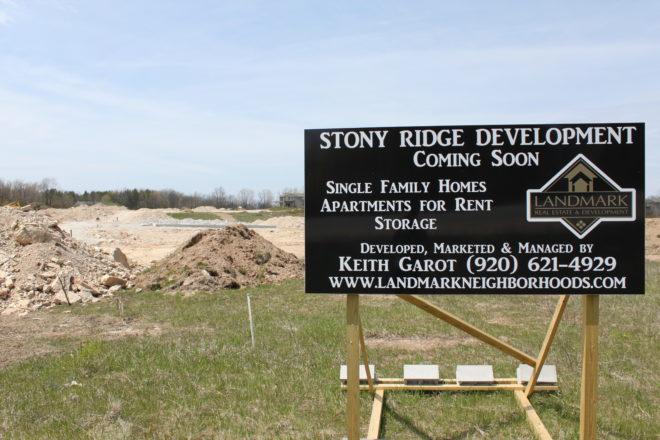 Village officials are expecting nearly $10 million in construction of new residential projects within Sister Bay’s Tax Increment Finance (TIF) district this year, but those projects have already been delayed and their future remains uncertain. The $6.2 million Stony Ridge apartment, garage and single-family home project has been delayed for two years, leaving the village awaiting promised tax revenue to begin paying back the village’s debt.

An audit of the village’s 2016 finances and the TIF (often called TID for Tax Incremental District) determined that the $8.8 million TIF debt will not be paid back by the time the district expires in 2028. The village can close that deficit without putting massive debt on the tax rolls by selling village owned property and through increased new development within the district.

The village has attempted to encourage Keith Garot’s Stony Ridge development with a $590,000 infrastructure development loan, and has extended development deadlines multiple times.

“The first thing a developer who’s going to spend $1 million in your community doesn’t want to hear is ‘no,’” said Village Administrator Zeke Jackson at a May 16 Finance Committee meeting.

Much of the $10 million in expected development is tied up in Garot’s project, as well as Al Gokey’s condo developments on Mill Road across from the beach, and his Harbor View Estates projects on the Old School property.

Garot’s plans were originally approved in July 2014, with an expected completion date of Oct. 31, 2015. Few large projects meet their original completion date, but Garot’s has yet to make significant progress. Today, there is little more than an unfinished road and piles of dirt at the site of a proposed $6 million development.

The village has modified the development agreement with Garot to offer him an extension and provide a $590,000 village loan to build infrastructure at the site that would then be given back to the village.

Those stormwater costs are part of the infrastructure that Garot is building with the loan from the village through the Bank of Luxemburg. It includes a new road and utilities to the proposed sites. Under the terms of the current agreement, Garot was required to complete the road, utility and landscaping by May 25, 2017.

“The tools we have at our disposal are, we issue a notice of violation which is effectively a statutory requirement which says, ‘Hey you’re in violation of this development agreement and you have some time period to remedy it,’” said Jackson. “Ultimately what I believe Keith will do is to come in and say, well I need more time.”

Garot has asked for more time before and some village board members have been reluctant to give it to him.

Village Trustee Pat Duffy expressed concern about deadlines in 2014 while board member John Clove responded to Garot’s claim on Feb. 16, 2016, that construction would start soon by saying, “I’ve heard that before.”

“If Keith is the developer, Keith goes bust, how do we get paid back?” said Jackson at the meeting. At that meeting, Garot indicated he was ready to start work immediately.

“We’ve been waiting for this, we’re ready to go,” said Garot, stating his project will bring $6.5 million worth of taxable property into the TIF. 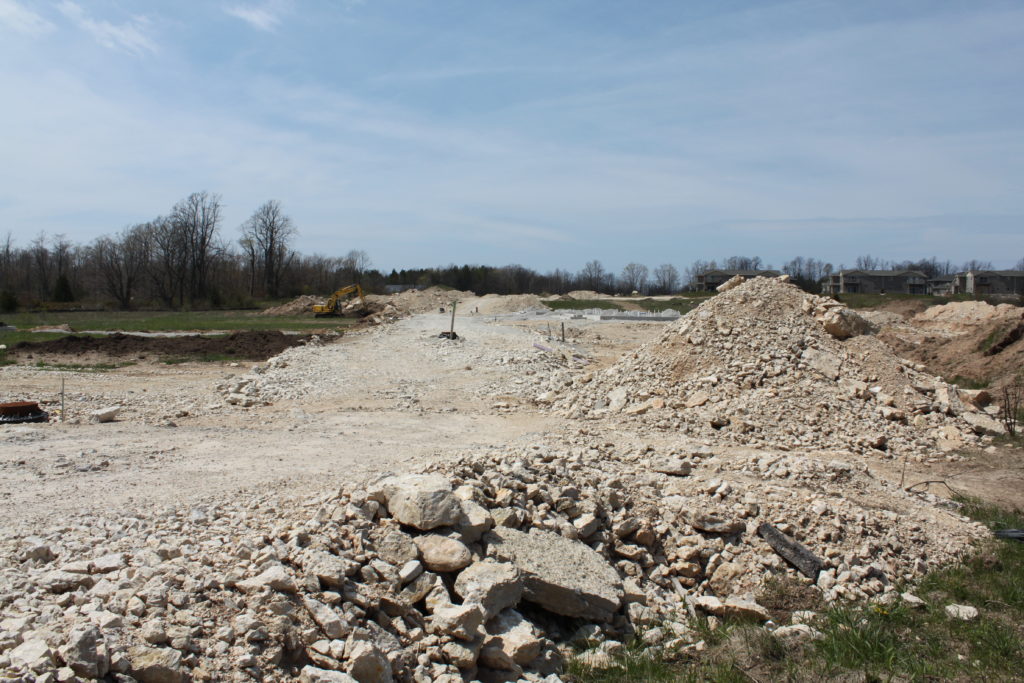 The site of the current Stony Ridge development property. Photo by Jackson Parr.

Since the property Garot is developing formerly belonged to the village, the village kept an interest in it until the lots actually sell. Should Garot’s development fail, the village could find him in default and reclaim the property. Jackson said the increase in the loan amount would ensure that, if Garot does default, the properties the village gets back would at least have a road and utility connections, making them easier to sell again.

“I don’t necessarily like doing it,” Jackson said. “If we do play landlord, now we have improved lots versus unimproved lots.”

Garot’s partner, Stan Wilson, said the village could expect $3.5 million worth of taxable property by the end of 2016. Garot began blasting in July of that year and Jackson reported that work was actively underway throughout the rest of 2016.

But the project came to a halt in 2017 and Garot’s failure to construct the proposed road, utility and landscape remediation marks his most recent default in the agreement with the village, which legally went into effect on May 25, 2017. Jackson said the project had an overrun on cost and Garot had to go back to find more bank financing.

The village could foreclose on Garot, but the village would then be stuck with more undeveloped property. The village is still trying to unload several other tracts it owns to pay down its $8.8 million in TIF-related debt, including the Braun property and the quarry site acquired in 2016, and is counting on taxes from the Stony Ridge development to pay it down as well. For every year the $6.2 million development is not completed, the village fails to earn around $80,000 in tax increment toward the TIF debt.

“My preference would be to work with the developer to move the developer along and not to seek a foreclosure on the development largely because I don’t want to be a real estate agent for all those properties,” said Jackson.

Another developer in the village, Al Gokey, faces a monetary incentive to get walls and roofs built on his two sites on Mill Road across from Waterfront Park and on the Old School property.

Gokey paid $12,000 in a minimum assessed value payment on the Mill Road West property because he had not completed a substantial portion of the project by December 2016. Gokey’s was the first project in the village to trigger the payment.

Gokey said he expects to finish the project in August.

“The two residential units are sold and then the commercial is pretty much spoken for, too,” Gokey said in a phone interview.

Gokey needs to construct two homes at his Harbor View Estates project by March of 2018 and then one home in each of the following years to avoid these payments.

When he purchased the property, Gokey made a verbal commitment that a spec home would be built in 2014 with more development to follow in 2015, according to village board meeting minutes. The village implemented the minimum assessed value payments after Gokey failed to meet these dates.

“[Minimum assessed value] was put into place after I purchased the property, which is pretty much unheard of, but that is something that I agreed to, to speed things along,” said Gokey.

The Harbor View Estates project on the Old School property, valued at $3.15 million, is expected to result in a tax increment of around $40,000 each year when completed.

The village has not implemented a minimum assessed value payment on Garot’s Stony Ridge property. Jackson said Garot will likely come before the board to request an amendment to the development agreement.

Garot did not respond to a request for comment.