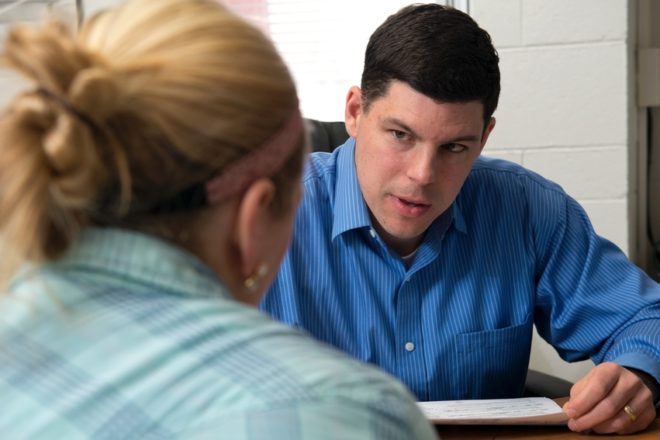 Remember the good old days before the internet when bullies were largely limited to torturing their victims by word or deed in person?

“In some ways it seems people feel emboldened because they are not face-to-face,” said Angela Olson, information management and instructional technology specialist at Southern Door Schools. “It’s hard to teach adults about that. Where can we start? With our kids.”

Olson helped organize a two-day event on teen technology use and misuse for students, parents and the community, featuring nationally recognized cyberbullying expert Dr. Justin Patchin, a professor of criminal justice at the University of Wisconsin Eau-Claire and co-director of the Cyberbullying Research Center (cyberbullying.org).

“Justin Patchin’s expertise is going to bring in a new voice for us,” Olson said. “We’re hoping parents and the community will come to hear his perspective and the experience he has, so we can spread the word about being good digital citizens.”

Olson said there was no single event that prompted bringing Patchin to the area, other than an overriding need to focus on the subject.

“We need to be teaching digital citizenship, not just for our students but for our community as well. We’re so involved with social media and the internet,” Olson said. “To be a good citizen, those means of communication are really important. Kids need to know the difference between fake and real news and just how to behave, be a good person online. We tell our students they need to be safe, respectable and responsible. How they behave in school, they should behave in the same manner online.”

Olson said the need for expert direction on cyberbullying and the esteem with which Patchin is held by educators is shown in the ease it was to work with the Gibraltar and Sevastopol school districts to coordinate the event.

“They had no questions,” Olson said of involving the other schools. “They were excited. Justin Patchin has a pretty good reputation. Once they heard he was coming, it was not hard to get the other schools on board. It’s a need for all of us. We just don’t have this covered in a real way and I think we need to. I’m just thankful our districts could coordinate it to bring him here. I don’t know if any of our districts could afford it on their own.”

Patchin will meet with students from the three schools during the day on March 10. That night at 6:30, parents, teachers and the community is invited to Patchin’s presentation on teen technology use and misuse at the Southern Door Auditorium. The next day, Saturday, March 11, Patchin will be a keynote speaker at a special professional development day called “What the TECH?” where local educators from the three schools are presenting sessions on various technology strategies. Media staff from Gibraltar, Sevastopol and Southern Door have planned this event, which will also feature local educators doing break-out sessions. This is all part of a state TEACH grant for rural schools where the schools had to apply as a consortium of schools.

“I hope it’s standing room only at the community event,” Patchin said. “That’s always the biggest challenge. I visit schools across the country and do quite a few parent/community events and it varies widely in terms of participation. In some cases, the room will be full, but in most cases it’s fairly empty. The ones who are there are probably the ones who don’t need to be there.”

Because, while he focuses on teens and cyberbullying, we now have a divisive political situation where our president, his supporters and his opponents are beating their cyberbully chests.

Last year the Pew Research Center found 40 percent of survey respondents have changed the settings or blocked or unfriended someone because of something related to politics.

“It is true that we are certainly hearing more reports of and observing more incivility online than we’ve ever seen before,” Patchin said. “That’s not to say the behaviors are increasing among adolescents, the group we study, but this is an opportunity for adults to model appropriate behavior online, especially when they might disagree with somebody else. There is a lot of disagreement out there and I think adults should use that to their advantage to model appropriate civil discourse. By and large, I think we’re failing at that.”

Patchin’s goal is to empower teens and the people who work with them to be able to deal with cyberbullying.

Patchin regards his initial visit to a school as a vaccination, inoculating a student body or school against cyberbullying.

“If they are being targeted by hurtful behaviors or see it happening to a peer, they know what to do or at least they have some tools,” he said. “Also, if they are considering in engaging in these behaviors and being hurtful toward others, they will at least maybe stop and think about the potential consequences and why it’s not a good idea. So at least we’ve given them the information so they can make informed decisions about what they are doing. But with brain development and adolescence, a lot of their decisions are not fully formed. That’s why we have to have these conservations repeatedly. A one-time assembly is not going to do it all.”

Patchin said he makes sure that everyone he speaks with knows that he will be a resource for them in the future.

“I look at success as occasionally administrators or even once in a while students will email me weeks or months later to thank me for helping them to deal with situations,” he said. “I look at my work as more focused on the long term and developing a positive school climate and culture. I’m helping to nudge the ship forward a little bit.”

“What I do hope results is that the conversation gets started and then we continue it, not something where it’s one and done,” she said. “That it will spark interest in continuing discussions about digital citizenship. Justin will focus on the teenage group, but I feel like we could and should expand it just as a community to talk about how to be safe online, how to protect yourself, that kind of thing.”

Last month Justin Patchin, Ph.D., a professor of criminal justice at the University of Wisconsin-Eau Claire and co-director of the Cyberbullying Research Center, and Sameer Hinduja, Ph.D., a professor of criminology and criminal justice within Florida Atlantic University’s College for Design and Social Inquiry, released results of a new study that included numerous formal surveys of teens, educators, law enforcement and parents in the last decade across more than 20,000 respondents.

This most recent study of middle and high school students found that when it came to school bullying:

This study found that when it came to cyberbullying: