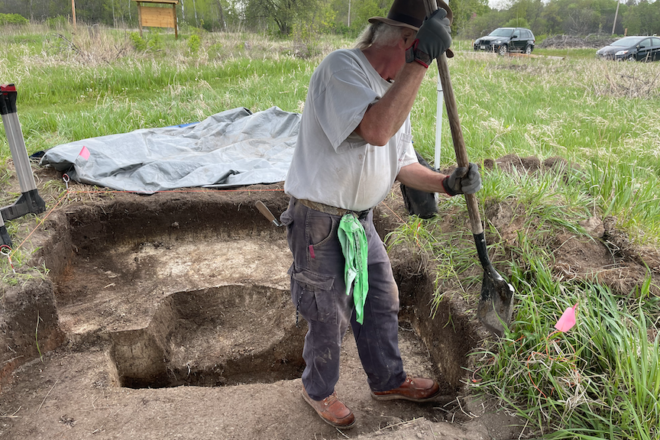 Bob Jeske, a professor of archaeology and anthropology at UW-Milwaukee, shovels a top layer of soil off an archaeological dig site at Crossroads at Big Creek. Photo by D.A. Fitzgerald.

Digging into ancient civilizations with archaeologists at Crossroads

Picking through someone’s garbage would reveal a lot about the owner’s lifestyle – what the person ate and drank for sure, and possibly something about his or her leisure-time activities, like spending or reading habits.

Calling this activity an archaeological dig sounds far more intriguing, but sifting through garbage is essentially what Randy Dickson, Bob Jeske and Emily Rux have spent lots of time doing, albeit the garbage of indigenous people who lived on Sturgeon Bay land about 1,000 years ago.

“We’re not digging in some pharaoh’s tomb,” said Jeske, a professor of archaeology and anthropology at UW-Milwaukee. “Someone filled that thing up with trash, basically.”

The thing Jeske was referring to was a basin in the earth that First Nation people dug for food storage or as a processing pit between 821 CE and 1021 CE. After the pit no longer served its purpose, the inhabitants used it for trash: shards of earthenware pottery, deer bones, fish bones, nut shells, plant seeds.

“That’s what we’re getting,” Jeske said.

All three professionals were there as part of public archaeology programming hosted by Crossroads during the spring and again in the fall. Funded by grants, the hands-on digs that both students and adults have participated in for nine years now teach excavation techniques while revealing the buried stories of the indigenous people who populated the area around Big Creek a thousand and more years ago.

During the past nine years, Dickson said they’ve systematically dug one-by-two-meter and two-by-two-meter units, unearthing artifacts at all three Crossroads dig sites at Big Creek, Ida Bay and The Cove. The flintknapping residue from tool making, intact arrowheads and clay-pot fragments they’ve found were made and used by people who lived in the Middle Woodland (300 BCE – 400 CE) and Late Woodland (400-1200 CE) eras between 1,200 and 2,000 years ago.

They’ve also found the dark stains that are “cultural features indicative of past human activity,” Dickson said. One of those indicated a semi-subterranean, keyhole-shaped, wigwam type of construction. Another stain pointed them to the basin-shaped food-storage/garbage pit.

Jeske summed up what the Crossroads dig sites have revealed since excavations began.

“What we can see is [that] about 1,000 years ago, somebody came by and hung out for a while,” he said. “They built a house – at least one house we know of. Then they also did things like stored foods and made fires – all the kinds of things you’d expect people to do.”

People did those things 1,000 years ago, but not everyone may believe or know they did them at these particular locations. Being able to prove these activities happened preserves the history in a way that nothing else can.

“Once native people left an area, people assume they never lived there in the first place,” Rux said. “So it opens up everyone’s understanding.”

Material artifacts help archaeologists tell stories about changing lifestyles, or how people treated the dead, or how people made choices about where they lived and what animals they used, and whether they were friends with their neighbors or wanted to kill them, Jeske said.

“It’s time travel without having a time machine,” Dickson said.

One of those stories comes from Washington Island, an archaeological site from 2,000 years ago – the same age as one of the sites at Crossroads. Jeske said the people who lived at both sites created and used the same pottery. Maybe they knew each other; maybe they didn’t.

But bone chemistry on dog and some human remains – “It turns out that in most groups, dogs eat essentially the same diet as their owners did, so they reflect pretty closely,” Jeske said – shows the Washington Island culture ate primarily fish and no maize (corn). Meanwhile, maize had already been introduced into the diets of the Crossroads culture, with people eating “just a tiny bit, probably not more than 5 to 10%” of their diet, Jeske said.

Two hundred years later, corn came to make up 50% of the diet of indigenous people across the region.

“They go from being foragers to horticulturists to agriculturists,” Jeske said. “And this happens all across the Great Lakes and Midwest in about 200 years. People switch from using very little corn to suddenly being dependent on corn. It’s like flipping a switch.”

Corn seed probably migrated north from Mexico with other seeds for beans and squash on trade routes known to have existed for some 5,000 years. What flipped the switch so suddenly for corn cultivation could have been some kind of religious resurgence, or it could have been climate change, Jeske said, with the Medieval Warm Period of 900-1300 allowing cultivation of tropical plants in North America.

The agent of change isn’t definite, but the artifacts prove changes did occur over a relatively short period of time in both the social structure and economic activity of indigenous cultures.

People living in one of the most advanced social systems in ancient America during the Late Woodland period resided at what’s now Cahokia Mounds State Historic Site outside St. Louis, Missouri, in southwest Illinois. Some 5,000 people were believed to have populated the site, with another 10,000-20,000 living within a couple miles. An extension of that group migrated to Wisconsin between Milwaukee and Madison.

“They lived here for about 100 years until the people that I’ve been working on at Lake Koshkonong showed up – and it looks like they killed them all,” Jeske said.

All these stories that archaeologists read from the artifacts they extract from the earth help to preserve the past, but they can also correct untruths in the historical record.

“One of the biggest problems is [that] you hear Europeans came [to the United States] and conquered the wilderness,” Jeske said. “There was no wilderness. From the Atlantic to the Pacific, people were using the land in a lot of different ways. They worked the land really hard. They had technology; they used agriculture; they used fire to manipulate the edges of the forests. They weren’t just tree-hugging hippies, and they weren’t just passively sitting around waiting for nature to give them a living. They took what they needed – sometimes took more than they needed – but our nation is often talked about as if Europeans showed up and started utilizing property that wasn’t being used. And that is a pernicious lie, essentially.”

Crossroads’ public archaeology programs take place twice a year, in the spring and fall. To find out more about upcoming programs, visit crossroadsatbigcreek.org.