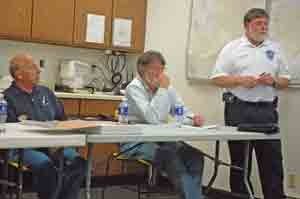 Door County Emergency Services Director Dan Williams, right, attended a special meeting of the Baileys Harbor Town Board on Sept. 15 to talk about the aftermath of the deluge that hit the town the night of Sept. 4 – 5. To his left are town board member Peter Jacobs and town Chairman Donald Sitte.

The dozen people in attendance at the Sept. 15 special meeting of the Baileys Harbor Town Board gave a big round of applause to town employees who performed so admirably when the town was under deluge with anywhere from six to 12 inches of rain the night of Sept. 4 – 5.

“Everyone knew exactly what to do,” said Town Chairman Donald Sitte.

“It was really quite a success as far as a response standpoint. We couldn’t do anything about the rain. It kept coming and kept running,” Williams said. “None of us is trained for it. We’ve never expected that much rain. I’ve heard everything from six inches to somebody who had a 12-inch gauge and it was over the top of that. Who knows how much we really got exactly? It was a lot and we weren’t really ready to take that much water on.”

Since so many people were affected by the storm and so many are still on waiting lists for contractors to assess the damage, Williams decided to extend the deadline for submitting damage assessment forms from Sept. 15 to Sept. 29.

Williams said the damage total he received by the original deadline amounted to $623,000.

“I know that there’s going to be more coming in,” he said, but added that the final figure probably won’t be anywhere close to prompting state or federal aid.

“Because of so many natural disasters around the country in the last 10 years, the threshold for meeting aid criteria and getting declarations of emergencies have really gone up a lot. It used to be a couple million dollars, and now it’s like $20 million just to get them to look at you. We are not going to hit that,” Williams said.

However, he urged everyone who was affected by the storm to fill in a damage assessment form.

“The worst thing that could happen is nothing,” he said. “The best thing that can happen, we are hoping to get a Small Business Administration qualification for low-interest loans. Really, the problem is nobody had flood insurance, this is considered a flood so all the insurance claims are being denied.”

Fire Chief Brian Zak reported that members of his department logged 207 hours of manpower in 60 hours during and after the storm, dealing with downed power lines, triggered alarms, a house explosion on Logerquist Road and many other emergencies.

“It tapped us for everything we could handle, but everyone came through,” Zak said.

Town Administrator/Clerk Doug Smith expects to be conducting business from the town auditorium for about a month while repairs are made to the basement offices in the town hall.

Brynn Swanson of the Baileys Harbor Community Association reported that the 40-yard dumpster that the association teamed up with the town to provide for the disposal of flood-damaged goods is costing about $600 each time it is filled. She also noted that some people are abusing the generous offer by using the dumpster for housecleaning rather than for getting rid of water-damaged items.

In order to help pay for the dumping costs, Swanson said vendors at the Sunday farmers market have agreed to donate 10 percent of their sales to help defray the cost of the dumpster. The town agreed to pick up any additional costs.

The town authorized the dumpster to be available for another two weeks, but at the discretion of the town administrator and Swanson, who suggested one more week may be enough.