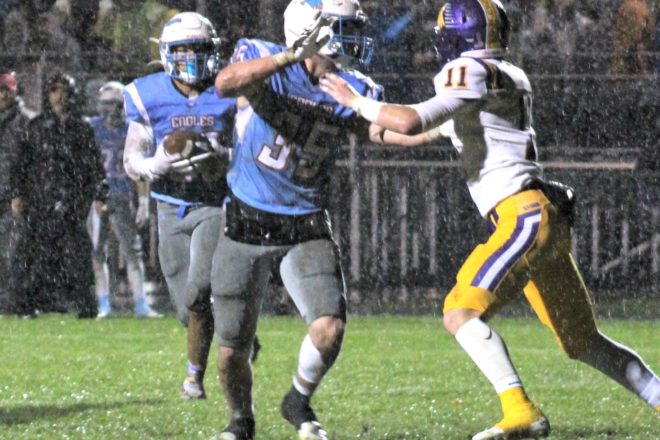 Both teams recorded two touchdowns apiece amid the wet conditions, but it turned out to be the extra points that made the difference with Kewaunee winning the third-round WIAA Division 5 playoff game against Southern Door, 15-12.

Kewaunee scored first on its opening drive capped off by quarterback Mitchell Thompson running into the end zone from a yard away with 7:17 remaining in the opening quarter. The extra point gave the Storm a 7-0 lead.

The Eagles got on the scoreboard early in the second quarter when quarterback Drew Daoust ran into the end zone from five yards away with 10:30 left before halftime. Southern Door went for a two-point conversion, in which an option pass from running back Zack Lynch to Jack Peterson fell incomplete, with the Storm remaining in front, 7-6.

Peterson then set up another Southern Door score less than two minutes later when he intercepted a Thompson pass and returned it to the Storm’s five-yard line. Lynch then ran into the end zone from there for the touchdown, but his rushing attempt on the two-point conversion ended up short of the goal line, leaving the Eagles with a 12-7 advantage.

Kewaunee threatened to score late in the first half, but time ran out before the Storm got a snap off inside Southern Door’s five-yard line, leaving the Eagles in front by five points at halftime.

Points were hard to come by in the second half, with Kewaunee’s only touchdown coming with just over six minutes left in the fourth quarter when Demardo Echols ran into the end zone from more than 70 yards away. The two-point conversion extended the Storm’s lead to three points.

Southern Door, unable to score in the second half, lost for the first time this year and ended the season 11-1 overall.

Kewaunee, which avenged its only loss of the season Oct. 7 against the Eagles in Packerland Conference play, improved to 11-1 and advanced to the fourth round of the playoffs Nov. 11 to face last year’s Division 5 state champion, La Crosse Aquinas, at Wisconsin Rapids. The fourth-round winner plays for this year’s state championship Nov. 17 at Camp Randall Stadium in Madison.