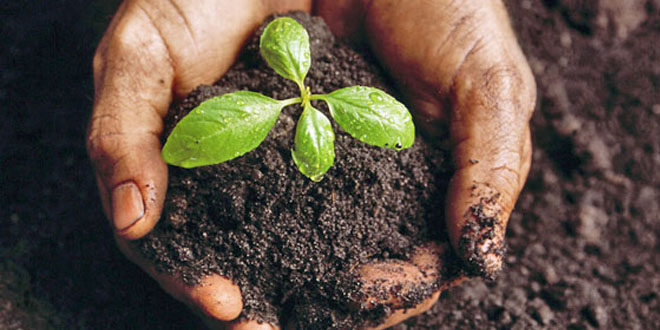 If we’re honest, most of us probably take soil for granted; it just always seems to be there. Along with growing plants in soil, we dig through it, build structures on top of it, and walk across it. So what is this stuff that plants grow in?

First, an important note about terminology. The words soil and dirt are not interchangeable. Soil is defined as a dynamic, natural body composed of minerals, organic matter and water, which acts on and is acted upon by living organisms in a thin layer covering the earth’s surface.

Dirt is the stuff that gets under your fingernails and what you track through your house. If you switch the terms, I can ensure you that you’ll get some dirty (ha!) looks from any soil scientist you meet.

Now that that is clear, a simplified definition of soil is that it is crushed rocks of various sizes mixed with dead plant material (organic matter) and water, which is teeming with living creatures including everything from rodents, worms, insects, fungi, algae, protozoa, bacteria and so much more.

Just like living creatures, soil can be healthy or unhealthy. A healthy soil is composed of approximately 50 percent pore space, 45 percent minerals, and 5 percent organic matter. Pore space is the open space between soil particles. If you imagine a jar of marbles, even though the marbles form a solid mass, because they are round, there is a lot of open space between them. The same thing is true in soil and the pores fluctuate between being filled with air or water, depending on rain or irrigation. Right after a heavy rain, the pores may be completely filled with water, but as the water drains through, air space will open up allowing plant roots to breathe.

Soil minerals are rocks that over time have been ground down into different sized particles. Obviously, there are still plenty of rocks and gravel in soil, but after that, the minerals are categorized into three categories in decreasing size: sand, silt and clay. Most soils are mixtures of sand, silt and clay, and the amount of each one changes the soil characteristics regarding how quickly the soil drains, how quickly the soil dries out, and the nutrient holding capacity of the soil. The proportion of sand, silt and clay vary from location to location and the type of rock they are formed from varies based on the underlying bedrock and glaciation. Door County has a large amount of limestone bedrock, which gives our soils certain characteristics like a high pH.

Unlike the mineral composition of soil, the amount of organic matter in soil can change based on our agricultural or gardening practices. Soil organic matter is increased by mixing in compost or by allowing natural vegetation or mulch to decompose on the soil surface. One of the main ways that soil organic matter is removed from the soil is through excessive tilling. When soil is tilled, microbial action increases because the soil microbes have more access to oxygen. When microbes speed up, they use up any available nutrients in the soil and consume organic matter at a faster rate than if the soil was left undisturbed.

One of the most important practices for maintaining healthy soil is to avoid compaction. Because an ideal soil is about 50 percent open pore space, if it gets squished, the soil can’t hold as much water, plant roots are limited access to oxygen, and nutrients become less available to plants. Additionally, a compacted layer deeper in the soil (a hardpan) can create a barrier that plant roots can’t grow through and thus lead to stunted plants. Some compaction is unavoidable, but wet soils are the most prone to compaction, so walking through or tilling soils that are wet will have an impact. If possible, design garden beds with stepping stones or mulched pathways where you can reach all your plants without needing to step in the bed itself. If it is wet, it is almost always better to wait for drier weather than to force your way through a soggy garden.

As with most things, the best management practices for having a healthy soil comes down to finding an appropriate balance. Tillage prevents some weed competition, but it can lead to compacted soil and reduced organic matter. Leaving all plant residue on the surface can increase soil organic matter, but may lead to higher levels of insect damage or plant diseases the following year because they survive in the leftover plant material. Additionally, often the weather doesn’t cooperate as we’d like. If crops are ripe, there are times that you are going to need to pick them, even if the soil is a bit too wet.

While there is no silver bullet, the main takeaway is that you should be intentional with every time you walk into your garden: weigh the positives and negatives and then act. And hopefully you will also pay more attention to the amazing soil beneath our feet.