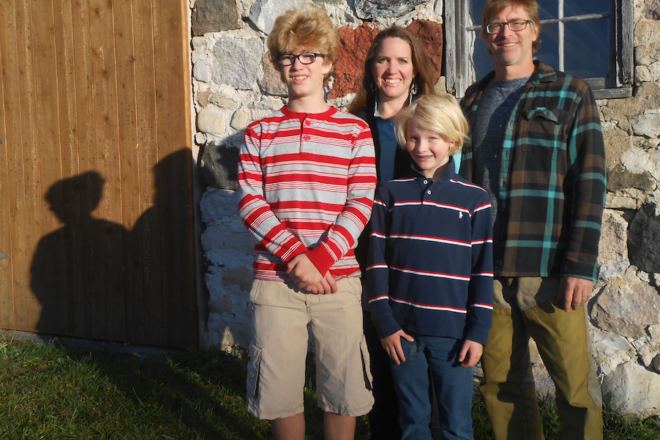 The Martin family knew they’d found “home” the moment they stepped foot on the property.

Three families, 111 years and the property that unites them

Charles Flok of Jacksonport and Bertha Hein of Baileys Harbor were married on Sept. 16, 1908. They first paid taxes on improvements to their property on North Junction Road south of Egg Harbor in 1910, so either their home or the huge barn (or perhaps both) were built that year on the 200-plus-acre farm overlooking Hibbards Creek.

There must have been a neighborhood barn raising for the structure that rises 45 feet at its peak, and one can picture the five little Flok girls sliding down the hill in front of the house in the winter, or daring one another to jump into the spring-fed, never-warm creek in the summer.

Charles died at age 66 in May 1945. Bertha died in June 1969 at the home of her daughter, Ann Kaap, in Milwaukee, where she had lived following Charles’ death. She was also survived by daughters Adeline Hansen and May Johnson. Two other daughters, Rose Brandt and Hilda Stenzel, died earlier.

At various times after her father’s death, Hilda – the Jacksonport correspondent for the Advocate during the 1950s – and her husband, Leo, lived on the home farm, as did May and Bob Johnson before selling it to Neil and Patricia McCarty in the 1960s.

Several years before Neil died at age 99 in 2020, he sold 14 acres of his property to Mike and DeDe McCartney to build their own home, and the men became close friends.

“Neil was the kind of person,” Mike said, “that when you entered his home, your tight shoulders instantly came down off your ears. He was a kind man with a contagious smile and worldly knowledge.”

A few years later, Neil donated 80 acres of his property along the creek to Door County Land Trust. He hoped to find a family that would care for and love the land as much as he did to buy the rest of it.

Meanwhile, in St. Paul, Minnesota, Russell and Miriam Martin had been looking for three years for acreage in the country on which to raise their sons, Ben, 6, and Silas, 2. Miriam was making coffee and looking at ads for farms for sale one morning in 2014 when she spotted an ad from Door County. She ran upstairs with Russell’s coffee and told him, “I’ve found it!”

“We were on the road within four hours,” she said. “It was a beautiful fall day, and when I saw the boys running down the hill with the wind blowing through their blond hair, it was just as I’d pictured our life. I knew we’d come home.”

Miriam, who has a PhD in instructional technology, worked remotely for Capella and George Mason universities. Russell, with a background in engineering, developed skills as a carpenter, plumber and electrician through buying run-down houses to rehab and flip.

“He was often thanked by the neighbors for eliminating an eyesore,” Miriam said.

“The Twin Cities are wonderful,” she continued. “I wanted the arts and culture wherever we settled. Russell would say he’s a natural mountain man who was looking for a farm and an orchard – the farther north, the better.”

Miriam grew up in northern Wisconsin. Russell is a native of Chicago, although his family has had a cabin on Lily Bay for 35 years. They hoped to raise their sons closer to family, ideally on a farm with fruit trees, in an area strong in the arts.

They knew that Door County checked all those boxes, but they didn’t realize in the beginning the kind of people they would meet.

“The boys and I moved into the old farmhouse in August 2014,” Miriam said. “Neil McCarty had built a smaller house up the hill behind McCartneys’ for himself and Patricia. The farmhouse had sometimes been rented, but when we arrived, it had been empty for a while. We left most of our furniture in St. Paul to ‘stage’ the house there until it sold.

“We didn’t even bring a lot of toys for the boys at first, but right away Ben’s first-grade teacher at Sevastopol came by with trains and blocks for them to play with.”

Russell had commitments in St. Paul until December, but his first job when he got to Door County was to put in a wood stove. Ben’s teacher let the Martins know that trees had recently been cut at her house, and they would be “doing her a favor” if they took them away for firewood.

“We decided to live in the house for a while before making any changes,” Miriam continued. “Russell wanted to build a chicken coop and get started restoring the barn. So many wonderful old Door County barns are disappearing, and he was determined to save ours.”

Mike McCartney has described the Martins as “self-taught homesteaders, a dying breed.” But Russell is quick to point out, “You can think you can do everything yourself, but no one can really do it alone. It took me two years to clear an 80-year accumulation of moldy hay from the mows, stalls and plank floors.”

The Henschel Sawmill supplied white-pine siding and lumber for the barn, and friends and neighbors provided helping hands and advice as needed.

“Beverly and Paul Osborne, right across the road, have become like a third set of grandparents for our boys,” Miriam said. “They invited us over for our first Thanksgiving here, and gave Russell his first outside job: building a storage cabinet. They have been such a blessing. I asked where people go out to eat in the winter, and they said, ‘That’s why you get to know your neighbors!’

“During COVID isolation, we had a sort of New Year’s block party with cheese and crackers by our mailbox. People just stayed 10 or 15 minutes because it was pretty cold. On Valentine’s Day, the Osbornes opened their garage doors, and all the neighbors huddled inside for a while – just the joy of being together.”

Russell has grafted apple trees and now has 20 varieties. Miriam cans food from their sizable garden.

“When the boys were younger, they picked what they wanted to grow,” she said, “and they always chose corn. They liked to eat it, but we suspected it was also because corn was easier to weed.”

They raise turkeys and have a small flock of chickens – free range, except when the garden is too appealing.

“The 16 acres closest to the road are rented to two nearby farmers who raised wheat last year,” Miriam said. “Ben and Silas saw it being planted, and at harvest time, Russell asked if he could have a bit of the grain. He and the boys crushed it, and I baked bread. They got to see the process from field to table in a real way.”

The boys have at times attended school, but they are mostly home-schooled by Miriam. They were in grades four and eight this year, and Ben will be ready for high school this fall.

“We make the decision year by year,” Miriam said, “so we’ll see.”

They are far from isolated. Ben, a budding actor, played a leading role in a Northern Sky Theater show a few summers ago and was in Our Town at Sevastopol this spring. He gets up at 5:30 every morning to write for an hour. Silas is into origami.

They just returned from a week in Kansas City with Sevastopol’s Destination Imagination teams, where they competed with students from around the world. Silas’ elementary-school team placed first overall, including first in the Instant Challenge. Ben’s middle-school team also placed first overall and earned the coveted Renaissance Award.

They took sailing lessons at Ephraim last summer and have a sailboat for the lakes and a canoe for the creek. And like generations of other children have done, they challenge one another to see who can spend the most time in the always-50-degree water. (Last year’s record was five minutes.)

At present, the family’s only four-legged livestock is Daisy, a lovely and much-loved cat.

Plans for the giant barn after it’s completely restored? Maybe a cow or a horse?

“That’s up to the boys,” Russell said. “Whatever they’re interested in. Right now, we have a little makeshift theater in the loft where we watch movies. The boys have a play area, and there’s room for me to do woodworking.”

When he’s not busy on the farm, Russell does outside work. Last fall, Jim Ingwersen, the portrait artist, asked him to help with the restoration of his 1860s barn. Miriam works remotely for the University of Delaware, focusing on communication and strategic planning.

The Martins love the history of the place where they live, and they love sharing memories of how it used to be with people who once lived there. Homesteading on Door County land, much like a century ago – but with electricity.