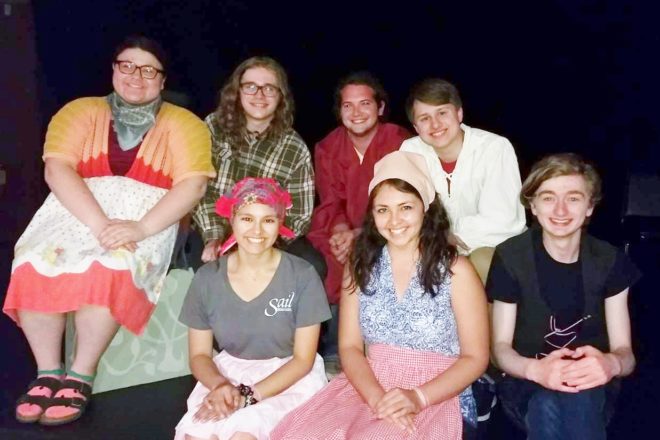 Rogue Theater’s Co-Artistic and Managing Director Stuart Champeau is going back to his roots, bringing the Tony Award-winning Story Theatre show by Paul Sills to the stage. Here you will meet again Henny Penny, the Golden Goose, Venus and the Cat, the Fisherman and His Wife, The Robber Baron, the Bremen Townson Musicians, and other favorites.

The late Sills was a long-time Door County resident and the original director of Second City in Chicago. His adaptation of Grimm Brothers’ and Aesop’s Fables is a delight to young and old.

Champeau did nine shows with Sills including Story Theatre and now has taken a new generation of millennials, including Sill’s grandson, Make Keene, under his wing, sharing what he learned from Sills and his mother’s acting techniques, the Viola Spolin method of acting, to coach the young actors. The troupe does Spolin-designed theater games in rehearsal to expand the actors improvisational skills and “stage comfort.” Actors include Make Keene, Kekoa Bicoy, John-Henry Amelinckx, Ian Toyne, Isabel Vreeke, Miluzka McCarthy, Mizu McCarthy and Zeno McCarthy.