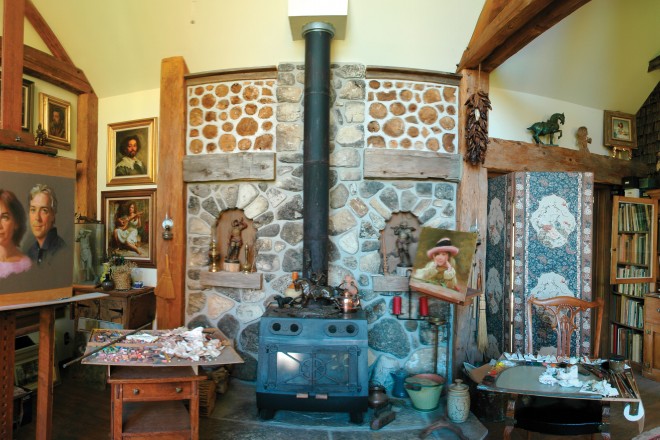 Between roughly the late 1880s and World War I, a type of construction known as “stovewood” was employed in the United States. Stovewood, Richard W. E. Perrin writes in Historic Wisconsin Buildings:  A Survey in Pioneer Architecture 1835-1870, “appears to be the only type of log construction that does not have any clear-cut antecedents in European building history. Its origins can only be traced to Canada where itinerant lumberjacks erected such structures in their logging camps early in the nineteenth century.” And, he continues, “while scattered examples have been located throughout the United States, Wisconsin seems to have an exceptional concentration.” Furthermore, while stovewood buildings did exist in southern Wisconsin, they have largely disappeared – Door County, according to John Kahlert in Early Door County Buildings and the People Who Built Them 1849-1910, “is one of the few places in the United States where examples of [the] unique but gradually disappearing form of pioneer wood construction know as ‘stovewood’ can still be found.”

With stovewood construction, Kahlert explains, “walls were made of lengths of wood, similar to those used in kitchen stoves, packed horizontally in mortar. The use of stovewood varied slightly from place to place, but in Door County buildings were usually framed as in modern construction. Stovewood was then stacked in mortar between the upright timbers. The wall would be as thick as the framing, ranging from a few inches to over a foot in depth. Homes were plastered on the inside and covered on the outside with shingles for maximum insulation,” while barns or other farm buildings “might be left bare, or covered on the outside with upright boards.”

Stovewood was most often used for smaller outbuildings, additions to existing log structures, or interior walls, although there are large farm and residential buildings with stovewood walls. Plausible ideas as to why stovewood construction was employed abound, although one cited frequently is that it was easy to work with. Constructing a conventional log building, Perrin says in The Architecture of Wisconsin, “involved felling, hewing, lifting, and joining timbers which might average 300 pounds apiece if conifer, 500 pounds if oak. The cutting and placing of such structural units required at least four strong, skilled men. A stovewood wall, on the other hand, could be built by a single, relatively unskilled person, with even the children being able to carry small chunks of wood which would seldom have weighed more than ten pounds, and generally less.”

Stovewood construction supplies were also easily and cheaply available. There was throughout Wisconsin a surplus of wood as the state was logged, including wood already cut to the traditional stovewood length of 14 inches, not to mention, particularly in Door County, plenty of limestone for mortar. Bryan Nelson, owner of The Blacksmith Inn, surmises stovewood construction was used so heavily in Door County because “settlers were probably just making do with the materials at hand. By the turn of the last century, Door County had been completely logged. The only things left for construction purposes, then, were limestone and smaller cedars, tamarack, and hemlock trees. Those woods also happen to be very rot- and bug-resistant, which may explain the longevity of many stovewood buildings in Door County.”

The original building of The Blacksmith Inn, which is listed on both the state and national historic registers, is one of the largest and best examples of a surviving stovewood building in Wisconsin, with all four exterior and many interior stovewood walls. Bryan Nelson and Joan Holliday bought the building from Dave Hadlinger, who had already been renovating it for two years. Nelson says, “We took over the renovation from Dave, although he had already stabilized most of the stovewood walls. That primarily involved rebuilding the areas where the mortar was deteriorating – all of the actual stovewood pieces in the inn are the original wood the Zahns [the original owners and builders] used to construct the home in the 1800s.” According to Nelson stovewood renovation is a time-consuming process, although fairly straightforward. The biggest problem, Nelson advises, is that “significant shrinkage seems to occur with wood that’s been drying for 5-10 years or even more. So, unfortunately, your best bet is to do your renovation with 100-year old dry wood!”

Phyllis and Jim Ingwersen followed that advice, expanding one building on their historic German-settled homestead on Old Stage Road in Liberty Grove using old stovewood pieces. Phyllis relates that while part of their remaining cow barn is original stovewood construction, they have also added onto the original granary, which serves as Jim’s painting studio, incorporating a new stovewood fireplace into the studio. “What happened,” she explains, “was that we had a big historic stovewood barn where we used to hold square dances on Tuesdays in the 1970s, and it completely burned down after one dance in 1980 – someone didn’t put out their cigarette completely. People felt so badly about the loss of that historic barn that they donated old stovewood pieces from their own properties to help expand Jim’s new studio [Ingwersen Studio Gallery].”

Although stovewood construction is not generally used in new construction outside a few areas in Canada, it appears to be making a comeback of sorts in Door County. When the home and hardware store in Baileys Harbor housing what is now The Common House restaurant were combined and renovated in the 1970s, the owners had Andy Redmann create interior stovewood walls. Trissa Crowley, current owner of The Common House, says she was told that “stovewood construction was used because it was cheap, fast, and warm. You cut the logs, laid the plaster, built the walls, and quickly had a nice, warm building.” She notes The Common House original building foundations date from the 1850s, the wood floors from the 1880s, and the tin ceiling from 1892, so adding stovewood walls to the renovated structure made sense architecturally. Andy Redmann also designed and built the Settlement Courtyard Inn and the Settlement Shops south of Fish Creek, as well as at least one private home and the Century Hall in Milwaukee, all incorporating stovewood. Redmann’s daughter Marise says, “He used stovewood in those buildings so as to carry on its historic look. In the Settlement Inn, the entire fireplace lounge area is stovewood, and people just love it.”

More recently, Baileys Harbor residents Barb and Bob Shine constructed a small shed using stovewood. Bob says he decided upon the style both because he had a lot of cedar available after clearing a building site for their home and because it would be in keeping with local historical construction methods. This unique shed, which is made of cedar logs, Portland cement, and lime sawdust, has a brick floor, rather than the traditional wood, and a wood shingle roof with an old-fashioned lightning rod. Bob explains he and his son constructed the shed following the guidelines provided in a book by David Sciles called The Irish Garden Shed showing – more or less – how to build and lay out a stovewood shed. While happy with his shed, Bob is skeptical that stovewood construction will make a significant comeback, noting, “Our shed was not easy to build! It was also very time-consuming and very expensive.”

Whether more residents will take on new stovewood projects in the future or whether this construction method’s longevity in Door County will depend upon the preservation efforts of owners of existing stovewood buildings remains to be seen. One certainty, however, is that this construction style appeals to those who are aware of its uniqueness and historical significance.

Thank you to Renee Hilgers, owner of Alchemy Fields, for the loan of her copies of the two Perrin books, both of which are out of print.