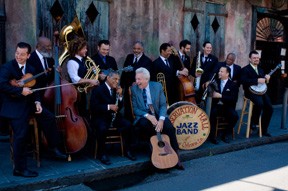 It’s fun to imagine bluegrass legend Del McCoury and Charlie Gabriel of New Orleans’ Preservation Hall Jazz Band sitting down and having a drink together. My head swims thinking of all the stories that the 73-year-old picker, McCoury, and the 80-year-old clarinet-playing cat, Gabriel, could swap.

Although it will likely be a source of ribbing until my dying day, I will admit in this public forum that I totally have a “grandpa crush” on McCoury. In my defense, it is an innocent infatuation, and I’m sure Mrs. McCoury is well aware that her husband is cuter than a speckled pup and he sings a mean hi-lonesome tenor. I’ll likely have a crush on Gabriel after the two perform at the Door Community Auditorium (DCA) later in July. After all, the two have a lot in common.

Both musicians have successful careers spanning over five decades. Both have logged countless miles on tour buses and played with hundreds of musician’s musicians. And, no doubt, both could spin some yarn about living, touring and performing across the country in the ‘50s and ‘60s. Still, it’s downright weird – in the very best of ways – to think of the two joining forces to combine old-school Appalachian Bluegrass with old-school New Orleans Jazz. But the two have been doing just that for a few years now.

When, why and how did these two veterans join forces? How do their distinctively different musical genres fit together? And, besides humidity, harmony, hardships and heart, what do the southern cultures of New Orleans and the Appalachian Hills have in common?

In 2009, McCoury was invited to perform on a fundraising recording project for Preservation Hall Jazz Band’s Outreach program, a program that aims to provide young musicians with instruction in the New Orleans’ brass band traditions. Some of the other artists who lent their talents to that project included Pete Seeger, Dr. John, Blind Boys of Alabama, Brandi Carlile (who also appeared at DCA this summer), Ani DiFranco, Steve Earle, Merle Haggard, Richie Havens, Angelique Kidjo and Tom Waits. The New Orleans’ musicians and McCoury must have hit it off because soon Preservation Hall Jazz Band and The Del McCoury Band began touring together. In 2011, the two groups collaborated on a CD, American Legacies. (While McCoury will be appearing solo at DCA, the album’s versions of “Banjo Frisco” and “Jambalaya” provide a taste of what to expect when he and Preservation Hall share a stage.)

Their joint concerts explore the commonalities of the two distinctly American musical lineages while celebrating their unique flavors. The collaboration is immensely entertaining, but it also protects, celebrates and promotes these uniquely American genres. Some performing arts centers across the country – like the Walton Center in Fayetteville, Arkansas – have received funding to present the collaboration through the National Endowment for the Arts’ American Masterpieces: Three Centuries of Artistic Genius, an initiative designed to acquaint Americans with the best of their cultural and artistic legacy.

The musical traditions of New Orleans Jazz and Appalachian Bluegrass do share several influences. Both came of age in the 19th and early 20th centuries and were played in informal southern community forums like churches, social clubs, back porches, taverns and “suppers on the grounds.” Both genres were performed and appreciated largely by regular working folk. Neither types of music would be performed in formal concert halls for many, many years. And, I’d be surprised if either would have met the guidelines for the early days of NEA funding.

One stark difference in traditional Appalachian Bluegrass and New Orleans Jazz is how musicians approach timing. In a 4/4 time signature – indicating four beats to the measure where the quarter note equals one beat – traditional bluegrass musicians place emphasis on the 1st and 3rd beats while jazz players place emphasis on the 2nd and 4th beats. If you’ve heard jazz musicians refer to “swinging it,” this refers to placing the emphasis on the 2nd and 4th beats. In contrast, old-school bluegrass is often approached in a straight-ahead, buckle up and hold on, fast four. It might not seem like much of a difference, but it is significant even considering that New Orleans Jazz is much jauntier and less laid back than other forms of jazz music.

I’ve been fortunate to hear the full groups perform together twice, most recently at Carnegie Hall when Preservation Hall Jazz Band celebrated their 50th anniversary and were once again joined by Del and an amazing cast of musicians. When the groups performed “I’ll Fly Away” and “When The Saints Go Marching In,” it was tricky deciding whether to tap my foot on the 1 and 3 beats or on the 2 and 4. The musicians seemed to decide on something in between a really relaxed 1 and 3 or a slightly manic 2 and 4…and it totally worked.

Of the Carnegie Hall performance, Jon Pareles of The New York Times hit the nail on the head in explaining Preservation Hall’s many and varied collaborations. He writes, “While it’s a paradox that welcoming outsiders and trying out hybrids is a survival tactic for a deeply local tradition, that’s a fact of life for present-day New Orleans.” The same could be said for hill music too. Fortunately for listeners and audience members this is one of the coolest sounding survival tactics I’ve ever heard.